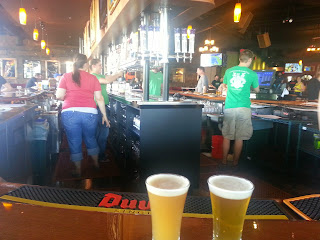 This is the first time 130 taps of Indiana Craft Beer have been in ONE bar at ONE time. That happens this weekend at the new HopCat at 62nd and College starting with the opening on Saturday (8/16) starting at 11:00 AM. This is also the first time THIRTY taps of Sun King beer AND THIRTY taps of Upland beer will be in one place. Expect some rare beers like barrel aged versions. Many of these kegs are 1/6 barrels so may not last too long! Over the next few days expect the HopCat lineup to change as kegs are blown so that by next week we expect some Belgian beers like LaChouffe and Saison Dupont to be on tap.

Patrons on Saturday will be rewarded with FREE Crack Fries which are a crazy spiced french fry served with fabulous cheese sauce. The first 200 through the door on Saturday will get a one-year (1 order, once per week, 52 weeks) prize. Expect some lines. However, local managers don’t know what to expect since this is the small chains first venture outside of Michigan. 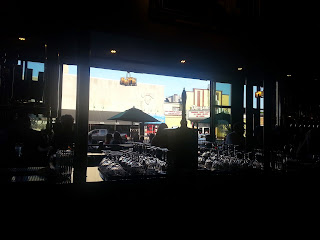 Founder and owner Mark Sellers tells us Branding will be an important issue for HopCat since Indy folks have not heard of the brand. We suspect it won’t take long for Indy to catch on that so many beers are in such a beautiful, up-scale looking restaurant. Sellers is a cool, laid-back guy who greets customers and cheers on staff with a smile while wearing a T-shirt. Sellers told us he returned to Grand Rapids from Chicago and wanted to open a bar. He says he is the vision, but he lets others manage the operation. His vision gives us a music-themed restaurant that is large, has beautiful mahogany tables, a large two-sided bar near College Avenue and another nice bar at the back of the restaurant. There is ample family seating (yep, kids are welcome) and there is outside seating. The convenient location at the base of the new Broad Ripple parking garage means patrons have convenience and security without having to deal with 62nd Street traffic.

What food we were able to try was terrific. The prices are reasonable. And though just getting set up the beer temperature in our preview was good and servers were hustling to make things right. Lovers of beer on nitro take note, they will eventually settle in to several (maybe 5) served this way, but their set up would allow them to do a special tapping with THIRTY beers on nitro! 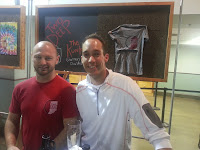 Meanwhile practically down the street from Broad Ripple the Indiana State Fair is going strong into its last weekend! Beer at the Fair seems well received. Last Tuesday they offered $2 Indiana pints and it was standing room only. Every person we talked with said they LOVED being able to try Indiana beer (and wine) at the Fair. Many attendees said indeed they tried a beer they never had before! This was a great thing for TwoDeep Brewing of 714 N. Capitol in Indy as they had only been open a couple of weeks when they have the chance to sample beer in the Grand Hall. Owner Scott Meyer (left) tells us several folks have stopped by the brewery after trying the beer at the Indiana State Fair.