Once again the Brewers Guild of Indiana pulled it off. 4,900 attendees plus 300 designated drivers, 100 volunteers, 200 brewers and pourers, and 100 other vendors descended on the old ballfield augmented by the western part of the Arts Center in the Broad Ripple area of Indianapolis last Saturday to celebrate beer. They tasted about 350 different beers on offer, played games, drank lots of water, sat in the shade, listened to the Healing Sixes, and generally had 5 hours of fun. Kudos to main man Jason Larrison and the rest of the Hoosier Beer Geeks for doing 90% of the organization. They were everywhere and seemed to have everything that could happen taken into account beforehand. Kudos for the small touches like John Hill providing some returned tickets to late-comers who didn’t realize all tickets were pre-sale. He kept these very few from being disappointed and even golf-carted some designated drivers to the correct entrance. Kudos for having enough port-a-potties finally. The 90° day and double last year’s count did help – there were virtually no lines there at all. Kudos for the extra space across the street and down to White River. This allowed an increase of 16% in the number of tickets and a corresponding increase in the money raised for the Leukemia & Lymphoma Society. Kudos to the Healing Sixes for providing great non-formula rock down by the water to the very small group of people that ventured that far. Kudos to all the Indiana breweries that brought enough beer. Most had kegs floating at the end. Kudos to the other friendly breweries that brought beer to share from surrounding states and beyond: Atwater Block, Bell’s, Boulevard, Bluegrass Brewing (Main Street and the Brewpub), Dark Horse, Founders, Goose Island, Gordon Biersch, Hoppin’ Frog, Schlafly, Victory, and more. Kudos to Cavalier Distributors and World Class Beverages for facilitating those other friendly breweries and filling two massive tents with more bottled beer from Avery, Boulder, Brooklyn, Dogfish Head, Lost Coast, Mad River, Magic Hat, New Belgium, North Coast, Ommegang, Rogue, Southampton, and more. Kudos to World Class Beverages again for reprising the Hopapalooza tent with goodies like Double Dog, Double Crooked Tree, Double Dead Guy, Double Wide IPA, Hell Hath No Fury, Homewrecker, Hop Wallop, Leviathan, 90 Minute IPA and more. Kudos to all the workers and friends of Cavalier, World Class, etc. who poured beer in their tents with gobs of people blocking all the air flow. They had the hottest jobs. Kudos to all the volunteers that took tickets, gave out water to designated drivers, ran the barrel toss, delivered ice, and did everything else that made the festival work seamlessly. Kudos to World Class Beverages and Crown Liquors for being major sponsors. Not only will their financial support add directly to the LLS income, the time Bob Mack, Jim Schembre, and Mike Sprinkle spent on the Festival’s behalf was surely invaluable. Kudos to the rain which held off until afterwards. No so much kudos to the temperature though. Kudos to all the attendees. We saw only one frat-boy type who lubed up beforehand – he tried some pull-ups on a tent support but was quieted down quickly by his companions. The 7pm closing was painless with no one begging for more. All in all, there were very very few complaints from anyone. The bus driver who brought 47 people from the Louisville/New Albany environs did complain about having to empty the dump tank twice on the way up. (We usually post everything up front but we have a lot of PICTURES that would clog up your RSS feeds. To see them continue to "Read more >>". It’s worth it.) 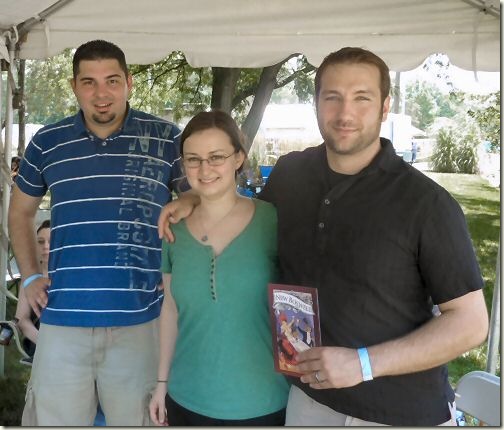 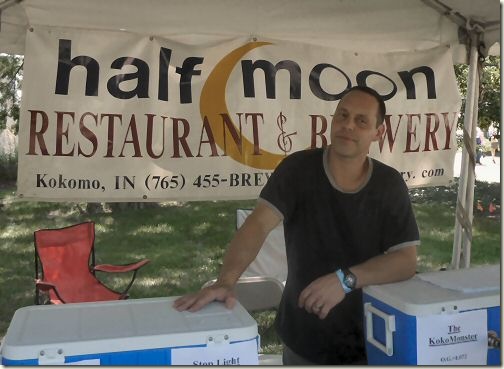 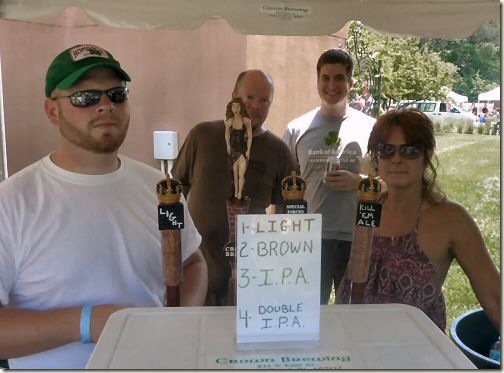 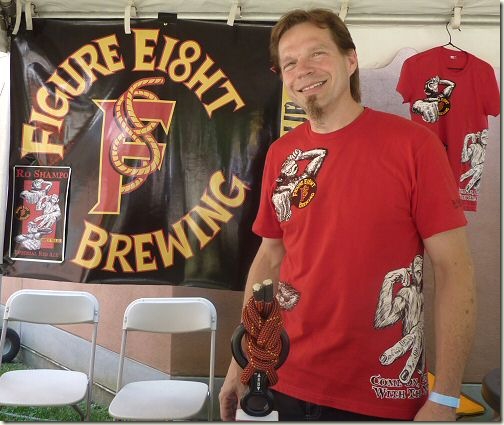 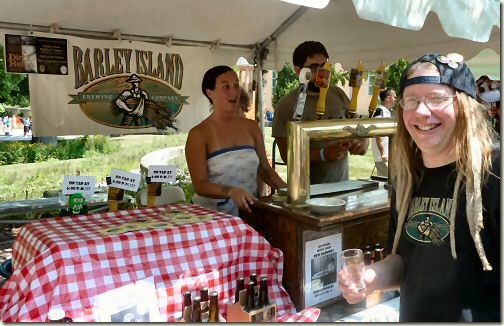 Mike Hess and friends from Barley Island in Noblesville
served almost a dozen different beers including Count Hopula
and some Barrel-aged 2009 ReplicAle Alt. 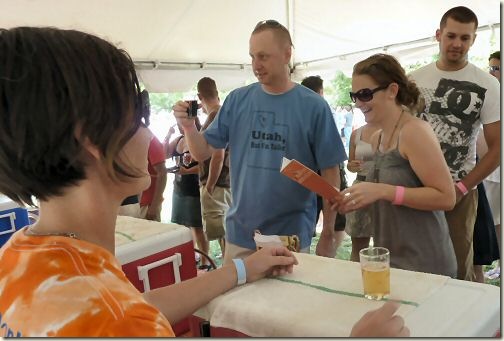 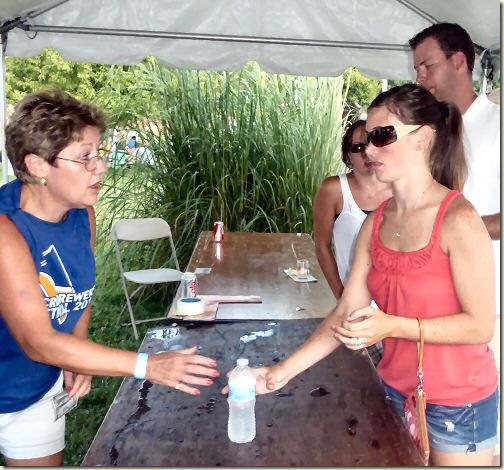 Water was one of the hot tickets.

The line at the Three Floyds booth was usually quite long. 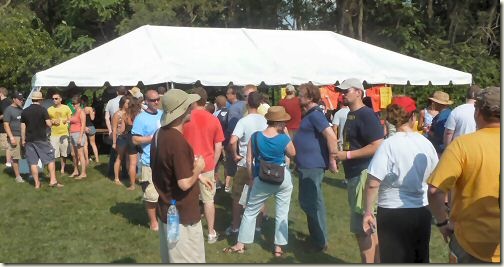 The line at the Firkin tent rivaled the FFF line all day. 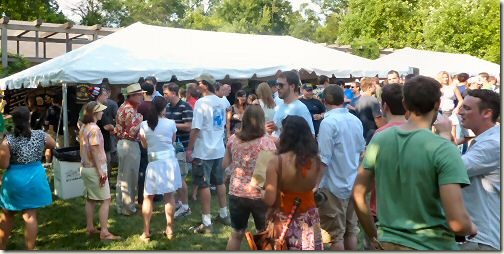 And the line at the Great Crescent table was also very long in the afternoon.
It was in the shade. 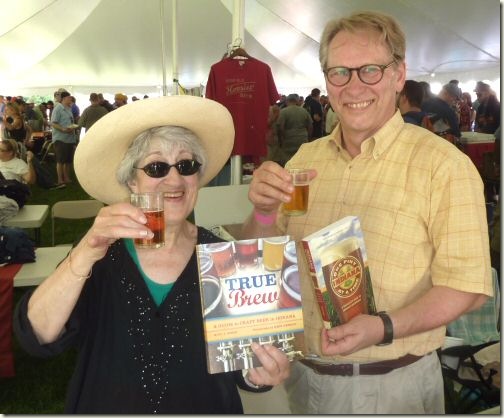 Upland bike jerseys were for sale.

The Healing Sixes played to sometimes only 20 people
only because no one knew they were back there. 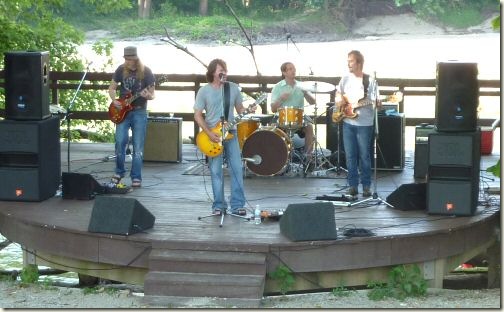 Even without a crowd, the Healing Sixes were enthusiastic and put on
one great set after another. Catch them out at Rib America on Sept 4th. 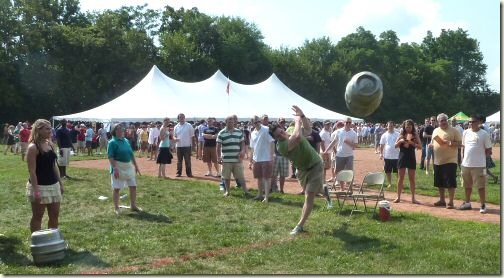 The Keg toss was, as always popular. A grandstand there was
a good spot to watch the varied throwing styles. 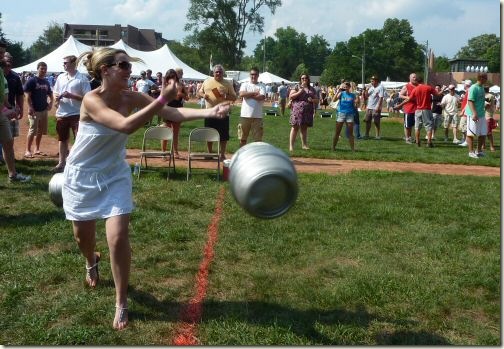 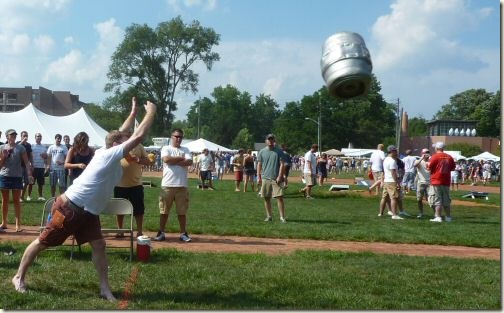 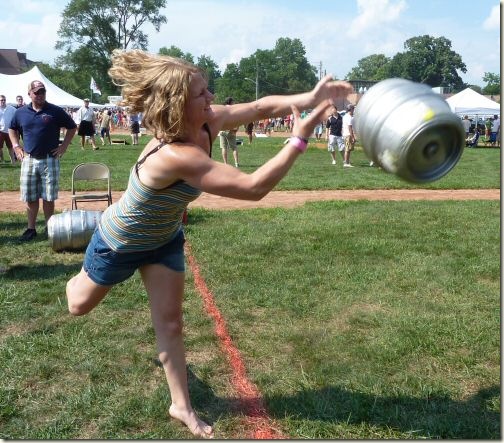 Oh, and congratulations to Stephanie Dansker and Adam Lipschutz who got married during the festival, albeit at the Indianapolis Museum of Art.