Brewers in both the home-brew and professional categories won from as far away as Texas! Even though this event is proudly sponsored by and featured within the Indiana State Fair we are quite pleased that it has become a national competition. Three of our indianabeer.com bloggers have been busy at work with Nathan Compton, webmaster, an event organizer while I, Greg Kitzmiller, judged for the 6th or 7th year and Jake Keefer was kept busy judging this year also. A quick comment: I’ve judged for the Kentucky State Fair and the Ohio State Fair and while nice competitions, neither are near as big the Brewer’s Cup. 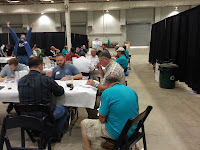 You will find major blogs here including photos during this next week with in depth coverage. However, here is a(n) (Unofficial- based on my notes) list of winners from this years Brewers’ Cup.

Professional Brewery of the Year: SunKing Brewery, Indianapolis, IN

Homebrew Club of the Year: Foam Blowers of Indiana

Special Mention for indianabeer.com: our own Nathan Compton, homebrewer, beer officianado, and our webmaster/blogger won 3 awards

HOMEBREW: MY APOLOGIES in advance for completely messing up some names! 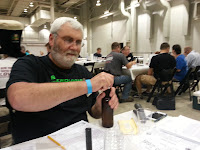 Note: Corrections and editorial content will be published later this week!

2 thoughts on “And the Winners Are…. Brewers’ Cup competition news!”