Greetings everyone! First off, we have a huge weekend coming up so please check out our calendar if you’re looking to enjoy some beer festivities. Along with various Greater Lafayette Craft Beer Week events, Friday brings the Zoo Brew and Wine Too in Fort Wayne and Beer and Bluegrass Festival in Franklin. On Saturday, you can hit Beers Across the Wabash in Lafayette, Upland’s 15th Anniversary Carnival in Bloomington, or Festiv-Ale in Indianapolis. Wrapping up the weekend on Sunday is Indy’s Dig IN – a celebration of local food, beer, and wine. I plan to occasionally post some reviews for beers you can find in Indiana that are new to the market, seasonal offerings, or represent uncommon styles. They may be old hat for some of you seasoned veterans, but I hope it will give you some ideas for what to seek out (or avoid) if looking for something new on your next trip to the liquor store. For the first in this series, we’re going big with the legendary Kulmbacher Eisbock. If you’re not familiar with the style, Eisbock literally means “ice bock” and can basically be described as a concentrated Dopplebock. The concentration comes from partially freezing the beer and extracting the remaining liquid. Leaving behind some of that pesky water intensifies the flavor and alcohol level of the finished product. What would inspire such an experiment? According to legend, it was pure accident. Here is the description from Kulmbacher, who lay claim to producing the world’s first Eisbock: The ice bock, also known as "Bavarian", owes its discovery to a coincidence. According to the chronicles of the Kulmbacher brewery, some time around 1900 an apprentice forgot on a cold winter day to carry two barrels of bock beer into the brewery cellar. The barrels stayed outside, were covered by ice and snow and weren’t discovered until the following spring. The barrels had burst and the apprentice was reprimanded. But the carelessness was a stroke of luck because under the thick ice coat, a bock beer extract remained, strong tasting and high in alcoholic content. 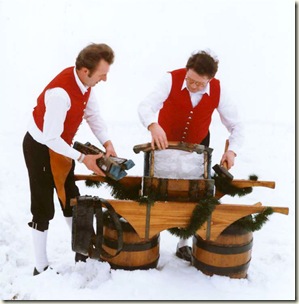 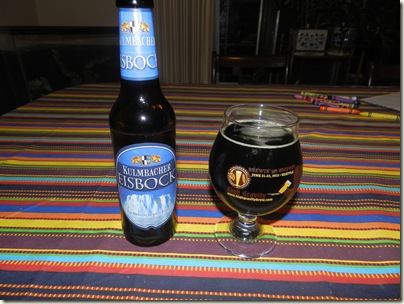 No freshness date on the bottle, has been in my cellar for about 9 months. The beer poured with a decent head for a 9.2% ABV offering, but it dissipated fairly quickly. On the higher end of bock color, it is a deep chestnut to dark brown but still very clear if you isolate a small sample. The aroma is bready malt with notes of dried fruit and brown sugar. Alcohol is very noticeable, but not harsh enough to be unwelcome. The flavor is a complex blend that brings to mind a fruitcake consisting of raisins, dates, and hazelnuts……soaked in booze. This is complemented by hints of caramel, bitter chocolate, and a slight sherry quality from some oxidation. This example has clearly had time to blend all of these qualities together, no one character is sharp or overwhelms the rest. Light bitterness on the tongue, no discernable hop flavor, no unique yeast flavors – this is all about maxing out the qualities of German malts. This beer begs to be sipped and take it all in, making you look forward to the next one. One note on the alcohol level: While not excessively hot or unpleasant, it is very prominent throughout. This is not a “oh, I can’t believe it’s X% ABV” type of experience. It works for me, but drinkers who do not enjoy prominent alcohol notes may want to seek out another option. Finding Kulmbacher Eisbock may require a little searching depending on your location, but 6-packs of 0.33 litre (11.2 ounce) bottles can be found at some of the better craft beer stores. Kahn’s Fine Wines lists it at $16.99, which I believe is the same price I paid at a Crown Liquors location. While a slight premium over most 6-packs, consider that comes out to roughly 25 cents an ounce. This would be the equivalent of a $5.50 bomber, which most of us would feel is a great value for a specialty beer. Your bonus with a 6-pack: drink a few now, set the rest aside, and enjoy noting how it matures over time. The Verdict [Avoid/Worth a Try/Recommended/Highly Recommended]: Highly Recommended