Tickets are now on sale here for the Brewers of Indiana Guild 2013 Winterfest to be held on January 26th at the State Fairgrounds. A VIP ticket will again run you $55 for the privilege of an early hour of sampling, General Admission is $40, and a Designated Driver ticket runs $10 but earns the eternal gratitude of your friends. Based on past experience, you’ll want to buy early and often if you want a VIP ticket. Don’t complain too much if you get left out – Michigan’s winter festival sold out in 13 hours. And that festival is 100% outdoors. In Grand Rapids. In February. Good times. To celebrate their 15th anniversary, Upland plans to revive the Champagne Velvet brand – with your help of course! Champagne Velvet, a German-inspired lager, was the flagship beer of Terre Haute Brewing Company during the early 20th century and is arguably the most distinctly famous Indiana-brewed beer from that time period. You have the chance to participate in re-launching this iconic brand with the following steps:

Aloha – Kona Brewing Company in Hawaii will begin distributing their beers to Indiana and several other Midwest states in January. Kona’s Pipeline Porter appears to be fairly well liked among the internet beer rating population. But it appears their Fire Rock Pale Ale is not actually brewed with rocks, unlike some other examples out there. When this popped up I initially thought we had some lovely Coconut Porter headed our way, but the beer I’m thinking of is actually from Maui Brewing. Sorry Poppi. 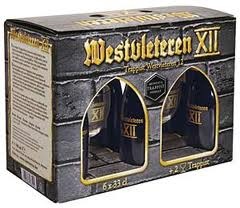 Much of the beer blogosphere has been abuzz over the release of a Westvleteren XII gift pack on December 12th. If you’re not familiar with “Westie 12”, it is a Belgian Quad from the Trappist Abbey of Saint Sixtus that has commonly been ranked as one of the best beers in the world despite never being sold in the U.S. until now (which I might argue has fed the hype machine just a little). The Indiana retailers carrying the gift pack are Keg Liquors in Clarksville, Crown Liquors in Indianapolis, and Village Liquors in West Lafayette. If you’re willing to drive out of state, additional retailers in Illinois, Kentucky, and Ohio can be found in a full listing here. The gift pack includes six 33cl (approx. 11.2 ounces) bottles of the treasured ale and two special tasting glasses. The retail price is supposed to be $84.99 but there have already been reports of retailers looking to charge more. I’ve been fortunate enough to try this once and it is a wonderful beer. But at approximately $20 a pint, you won’t find me standing in line/kissing beer manager’s feet/whatever other unthinkable act would be necessary for the privilege to hand over that kind of money. With that said, I can’t begin to imagine what kind of value this will have in the beer geek resale market.  The local blog site Beer Is My Passion is organizing a brewery tour to two of my favorite destinations: Northwest Indiana and Southern Michigan. The tour will utilize a 15 passenger van with a designated driver/chauffeur taking you on a 3-day/2-night tour from January 30th – February 1st with stops at People’s, Crown, Three Floyds, Founders, Bell’s, Dark Horse, Jolly Pumpkin, and Brugge Brasserie. There will be an added musical bonus for fans of Keller Williams. The price of just $60 covers all transportation for the trip including drop off at the breweries and hotels (lodging not included) – that’s about what you’d pay to get a cab across town these days. You can find more information and reserve your spot here. American Homebrewers Association and Great American Beer Festival founder Charlie Papazian weighed in on the debate surrounding big brewers entering the craft beer market. Side note: Henry Weinhard’s is owned by SAB Miller if you were wondering who is bankrolling the billboards around Indianapolis for this “craft beer”. I’ve already shared some thoughts on this and don’t want to beat it to death, but Charlie makes some good points about how big brewers already use distribution networks to their advantage and can use this to favor their craft offerings and further squeeze out independent craft brands. You can vote in Charlie’s poll to share how much who makes your beer “matters” to you. But I’m not about to imply you don’t care just because you’d like to enjoy an occasional Goose Island product. I recently had a Matilda and was quite pleased with that decision. With that said, these debates do bring some needed attention to issues that are nice to have in the back of your mind. Part of the fun of this blossoming craft scene is trying new things and supporting diversity in the market. This is normally the part where I subject treat you to some of the odder stories floating around in the world of beer. But sometimes you just have to admit when you have nothing. So here are some random pictures as I tap dance off stage. The last pic is courtesy of the Indiana Burlesque Collective – a good page to Like if you’re into such things. 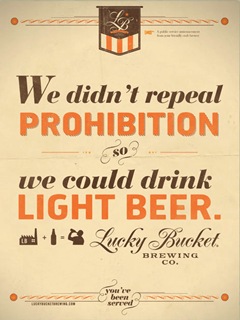 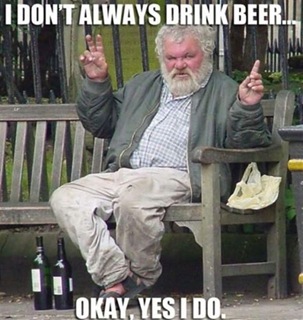