This Saturday’s South Bend Brewfest kicks off the 2013 slate of beer festivals! If you’re interested in attending and missed it on our Facebook feed, Eric from Michiana Beer Nuts has a full list of participating breweries and what they will be pouring. It looks like tickets are still available online for $35 (plus the dreaded $5 convenience fee) here. And the upcoming Crown Beer Fest (formerly Illiana Mayfest) may not take place until May 18th, but you can already get your early bird tickets here. VIP packages are $59 (plus $5 convenience fee) and General Admission is $35 (plus $3.50 convenience fee). That’s a pretty stiff price difference for an extra hour of sampling, but VIPs do get private rest rooms to isolate yourself from the peasants and a T-shirt to prove you survived. Some new release news to pass along:

Has anyone tried Heady Topper IPA from The Alchemist brewery in Vermont? It just surpassed Pliny The Younger as the highest rated beer on Beer Advocate. Beers of local interest include Three Floyds Bourbon Barrel Aged Vanilla Bean Dark Lord at #3, Founders Canadian Breakfast Stout (CBS) at #4, Three Floyds Zombie Dust at #7, Founders KBS at #9, and Goose Island Bourbon County Brand Coffee Stout at #10. That Westie 12 some of you recently snatched up checks in at #6 and might fetch up to $500 on EBay. So much for EBay cracking down on alcohol sales.

Good news for fans of Saison Dupont – the special seasonal release Saison Dupont Cuvee Dry Hopping, featuring Triskel hops, will be making its way to America for the first time in April. And here’s the kicker – it will be packaged in brown bottles to avoid the skunking issues that are often a problem with regular Saison Dupont in green bottles! In a lesson of appreciating what you have, Founders has announced a brand realignment that includes phasing out year-round availability of Red’s Rye PA in six-packs. I count Red’s among my favorite beers, but when the factors of trying new commercial beers, consuming homebrew, and trying to stay in decent health are aligned one realizes how infrequently you get back to the old favorites. Better stock up now. How many times have you planned an epic brewery trip only to find out there is no hotel within reasonable walking distance? You don’t want to spend the better part of a day driving or flying somewhere just to order a sampler. Well, the Stone Brewing empire is expanding to solve this problem with a planned hotel just across the street from their World Bistro & Gardens. Ideas being considered include beer taps in every room. Now, to be honest, Stone kind of struck me as dangerously close to the craft beer version of a tourist trap a few years ago. So it will be interesting to see how the hotel rooms rank in affordability. The grounds at Stone are very nice, but for my money there’s just something more memorable about a beer adventure that involves things like stumbling across a little trailer with a Dark Horse sign. You might think we’re tough on AB InBev around here, but that’s nothing compare to the spurned wife of an Anheuser-Busch executive who created Divorce! The Musical. Apparently the tell-all musical was successful enough in New York to make its way to St. Louis this spring. Choice cuts from the show include “Stop Goosing Goose Island” and “You Can Keep Rolling Rock”. Yes folks, the jokes are just getting worse around here in 2013. Brewery Ommegang has teamed up with HBO to create a series of craft beers inspired by the series Game of Thrones. This might put a new spin on your favorite drinking game. At least you stand a better chance of making it to work on time Monday morning with the Iron Throne blonde ale than a bottle of whiskey. Taking a shot every time there is gratuitous sex or nudity is just brutal with that series. 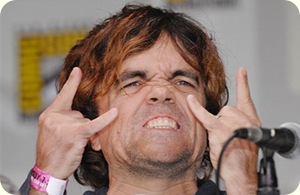