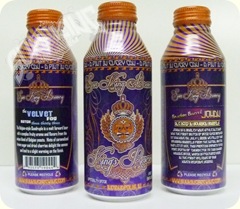 Flat 12 Bierwerks is expanding distribution to the Nashville, TN market later this month. In Sun King news, limited releases of two special beers are set for January 28th. Batch 333: The Velvet Fog will be available both at the brewery and in select liquor stores as a two-pack with a suggested retail price of $17.50. A small amount of Bourbon Barrel Johan the Barleywine will be available at the brewery for $25 a can. Advance reservations for half of the Johan batch will open here on January 21st. New Albanian’s annual strong beer madness known as Gravity Head is just around the corner with a 2013 theme of “Return of the Living Gravity Dead”. The event does not start until February 22nd, but the list of selections is already approaching 50 special offerings with a few yet to be announced. Keep in mind these beers will rotate on the taps over a span of several weeks – heaven help us if they were all tapped at once. Thomas Hardy’s Ale, which many consider one of the finest examples of the English Barleywine style, is being revived this year after production of the beer at O’Hanlon brewery ceased for several years. The rights for this beer are reportedly held by American importer George Saxon, so hopefully the new batch will trickle into our local market as connoisseurs were accustomed to in years past. Here’s one for the category of things you’ll hopefully find interesting because I like to promote them. There have been some creative uses for spent grains from the brewing process – many commercial breweries donate them to farms as livestock feed and some homebrewers compost or turn them into dog biscuits. But Alaskan Brewing is reportedly the first brewery in the world to use them as the sole fuel source for their steam boiler. Tackling this new idea required investment in a $1.8 million, custom-constructed spent grain steam boiler. But the benefits include a 60-70 percent reduction in fuel oil consumption that will save an estimated 1.5 million gallons of oil over the next ten years. Cheers to craft beer innovation! Something for the more technical-minded out there….we call it the Andrew Korty files – PopSci conducted an experiment with the process of fractional freezing. This is the process that can be used to concentrate an alcoholic beverage by freezing some of the water and decanting the remaining liquid. Fractional freezing created (accidentally according to the Kulmbacher brewery) the Eisbock style and has been employed to make some of the absurdly high alcohol “beers” in recent years like the BrewDog 32% ABV Tactical Nuclear Penguin and 41% Sink the Bismarck. PopSci claims that dry ice in isopropanol would allow you to freeze increasingly higher alcohol levels until you reached about 93% ABV. They don’t recommend trying this at home……but save me some if you do. Nothing stirs controversy (and pageviews) like a good list, so there was a solid buzz in the blogosphere when a site called First We Feast revealed their 20 most influential beers of all time. It didn’t strike me as such a bad list if you consider the panel was American and there seemed to be a focus on beers that set the standard for styles popular in our country. But draw the attention of a beer historian and head are gonna role. So Zythophile unpretentiously brings you the REAL 20 most influential beers of all time. They managed to agree on Blind Pig IPA, Goose Island Bourbon County Stout, Pilsner Urquell, and Sierra Nevada Pale Ale – check the rest out for yourself and see which you prefer. One small note for Zythophile: Can we please just acknowledge that starting sentences with “I don’t want to diss the panel that chose these beers, but” guarantees a panel is about to be seriously dissed. Breathometer, Inc. plans to launch the world’s first smartphone breathalyzer at Austin’s South by Southwest festival in March. It will allow you to measure your legal compliance by blowing into a key fob-sized device that plugs into the audio port. The app will be available on both iPhone and Android and is approved by the FDA and something called the Office of Drug & Alcohol Policy & Compliance. Now we just need that teleportation app to get us back home and fetch coffee. I’m looking at you physicists. From the newly minted “Three Floyds Global Industries: Entertainment Division” comes word of another attraction at South by Southwest. The film festival portion includes a feature called Drinking Buddies from Chicago filmmaker Joe Swanberg. The plot features two beer geeks named Kate and Luke who face a blurry line between “friends” and “more than friends” on a summer weekend once the beer starts flowing. Said beer features area breweries Three Floyds, Revolution, Half Acre, Bell’s, and Founders. Even more exciting – the cast includes one Ron Livingston. If that sounds familiar……yes, that would be Peter Gibbons (aka Peter-man) from Office Space. I might be a bad writer, but at least I never slept with Lumbergh. Cheers, Nathan