General Admission tickets are still available for the Microbrewer’s Festival for $40 and can be purchased here. Be warned that online sales end tomorrow and there will be no tickets at the gate. Many local breweries have tickets available if you miss out on online sales or don’t want to pay their “convenience” charges. The Brewers Guild has posted a list of confirmed breweries for the festival on Facebook (you can add Bell’s to this list). Don’t be left out, we might have some rain that will just enhance the festivities. Need some good advice and ideas on beer and food pairings? Check out the outstanding website from our new friends at BeerChow! In addition to general advice, BeerChow goes beyond the Beer Pairing Chart to give you specific beers to pair with a complementary dish. For example, check out the recipe for Dark Fruit Wafer with Trappist Westvleteren 12 or Spicy Steak and Mushroom Risotto with Three Floyds Alpha King. You can find a wide array of ideas for specific courses and full menus and even post your own pairing! We’ve hit the “major” awards already, but you can now view the full results of the Indiana Brewers’ Cup for homebrew and professional. While this space is a bit small to list the full results, I’d like to specifically recognize the first place winners from Indiana. On the professional side, congrats to Bier Brewery (4), Big Dawg Brew Haus, Crown Brewing (4), Mad Anthony (2), Oaken Barrel (3), Sun King, The RAM (3), Thr3e Wise Men, and Upland (2). On the homebrew side, congrats to Timothy Ahrens, Eddie Angleton, Eric Cougill, Jeff Davis, Nate Engelberth, Agatha Feltus, Cesar Gonzalez, Shawn Kaus, Kevin Lemme, Evan Martin, Ben Nowotarski, Tim Palmer, Jason Penrod, Kevin Pritchard and Matthew Oakley, Steve Quimby, Bill Staashelm, Brian Steuerwald, Paul Till, and Tom Wallbank (2). 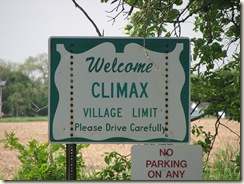 Combining beer and hot peppers has become a very successful endeavor for homebrewers. Bell’s Brewery will tap a Bit of Heat on July 21st, which apparently is an IPA brewed with paradise seeds, rose hips, and habanero peppers. The recipe’s origin comes from Bell’s second annual homebrew competition that was won by Geoff Groff of Climax, Michigan. In case you were wondering (just admit you were), the town of Climax received its name when the settler’s son climbed a tree upon arrival and declared “this caps the climax of everything we saw.” Climax launched the first Rural Free Delivery mail service in Michigan in 1896 and a memorial to this event now stands next to the Lawrence Memorial Library. The memorial features four bronze tablets, one of which was contributed by the Climax Men’s Fellowship Club. So there you have the story of Climax. Now what were we talking about again? Ah yes, beer. Dark Horse Brewing, in good company as one of my favorite imports from Michigan, is in the process of an expansion that will double their production capacity. What makes this case unique is the additional plan to add a creamery, candy shop, bakery, and distillery to their Marshall facility. If you’ve visited their current facility, which is reminiscent of a garage sale explosion in a trailer, you can imagine the spin they might put on the new facilities. This has been making the rounds already, but the IndyStar’s article on women in microbrewing is well worth a quick read if you haven’t seen it yet. In the modern age of political correctness, the world of craft beer is still the oddity where people sue over the right to brand their product with an “idiot” label. Southern California’s Coronado Brewing Company has filed a lawsuit against Washington’s Elysian Brewing claiming that the brewery’s new Idiot Sauvin IPA violates Coronado’s trademark for Idiot IPA. The gloves really came off in this one as Coronado claims the “Defendant’s goods are not of the same quality as CBC’s goods” (Elysian’s Beer Advocate rating of exceptional might suggest otherwise). These proceedings could be nervously viewed by Pennsylvania’s Weyerbacher, whose Blithering Idiot barleywine is available year-round. 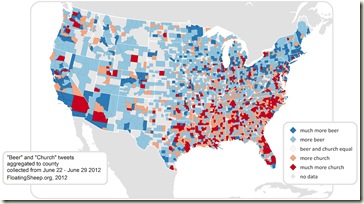 The enterprising folks at floatingsheep.org decided to pursue a Twitter analysis of all geotagged tweets sent within the continental U.S. between June 22 and June 28. They extracted all tweets containing the word “church” or “beer” and determined which one was more popular in each county. You will still need some good eyesight to pick out your county, but clicking on the picture to the right should provide a somewhat easier view. I’m fairly certain there is a block of “much more beer” in the middle of the state that represents Marion County, which is then surrounded on all sides by the “more church” and “much more church” designations. Take that suburbs! Cheers, Nathan