Ordinary beer does not compute, so Tin Man Brewing in Evansville is now open for business. Look for their beers at Tin Man’s taproom (1430 W. Franklin Street), on draft, and packaged in 16 ounce cans (note: cans will not be on shelves until early 2013). As a robot after my own heart, Tin Man’s brewing process emphasizes sustainability through resource conservation. They are the first U.S. brewery of their size to employ a high-efficiency mash filter system that uses 40% less water and 15-20% less natural gas than conventional systems. Tin Man’s offerings are touted as session beers, despite an IPA that pushes 6% ABV, and include:

As we approach the end of the year, the requisite “best of” lists for anything and everything will be making their way around various media outlets. The top 25 beers of 2012 from Draft Magazine includes Sun King’s Velvet Fog, which will be released soon in the now familiar Alumi-Tek pint bottles. Other beers that may be available locally include Founders Bolt Cutter Barleywine, Left Hand Milk Stout, Stone 16th Anniversary IPA, and Urban Chestnut Zwickel. Wine Enthusiast’s Top 25 does not include any Indiana products, but does include Ayinger Celebrator Dopplebock, Boulevard Tank 7 Farmhouse Ale, Founders Bolt Cutter Barleywine, Jolly Pumpkin La Roja, Left Hand Polestar Pilsner, Stone Ruination Tenth Anniversary IPA, The Bruery Saison Rue, and Weihenstephaner Vitus Weizenbock. So the consensus is you should get your hands on a bottle of Founders Bolt Cutter – good luck, and pick me up a bottle if that somehow works out for you.   Random Beer Review of the Week. These brief reviews should be an occasional addition to this column. While it’s fun to review super rare or out-of-market beers, I’ll try to focus on potentially interesting products that you can actually find in better craft stores around the state. This installment features Sam Adams Double Bock, which I picked up while looking for inspiration for a homebrewed recipe of the Dopplebock style. This beer took the silver medal in German-Style Dopplebock or Eisbock at this year’s Great American Beer Festival. These are fairly big beers, but Double Bock really pushes the envelope at 9.5% ABV. The batch number is 7832 but no freshness date is indicated. Malty, rich aroma with prominent dark fruit and hints of brown sugar and molasses. The flavor characteristics are very similar to the aroma with some residual sweetness balanced by alcohol in the finish. The carbonation is moderately high but doesn’t quite tame the lingering alcohol in the finish. This is one seriously rich, strong, malty beast of a beer. It’s a good beer, but you don’t find yourself immediately wanting to go back for more. The overall character reminds me of a Strong Scotch ale more than the smooth, drinkable character expected from a Dopplebock. The beer has good flavor and reminds you of a nice after-dinner drink during cold weather months. But it just doesn’t have the drinkability I’ve found in other examples of this style. It would probably round out and be a little more enjoyable with some age. At $11.99 for a 4-pack, I found Sam Adams Double Bock enjoyable and generally worth the price. But that price point is not a large advantage over some of the finer imports like Weihenstephaner Korbinian or Ayinger Celebrator. I would probably pay the slight premium for a reasonably well-kept example of one of these imports, or save my pennies for the February release of Bell’s Consecrator. 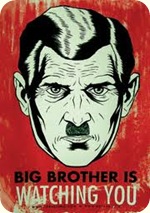 Rogue has created a new beer called White Whale Ale to celebrate the 41st Anniversary of Powell’s Books in Portland. The beer was given a special touch when pages from Moby Dick were added to the brew kettle. So you beer judges think twice before assuming that papery character is the result of oxidation. If you’d like to try this experiment at home, allow me to suggest using <ahem, shameless plug> Hoosier Beer: Tapping Into Indiana Brewing History by Bob Ostrander and Derrick Morris. A copy that was not destroyed in a brewing experiment also makes a great Christmas gift for your favorite Indiana beer lover. The comic strip Failure was recently canceled by the Boston Phoenix, allegedly due to a strip that insulted Phoenix sponsor Bud Light. The offending strip discusses dystopian society and compares Bud Light to the Victory Gin of Orwell’s 1984. Well, that and diluted horse piss. The Phoenix denies that this was the reason and cites their move to a new format and questioning if Failure was a “fit for the new publication”. I would suggest we all accept the Phoenix’s reasoning and end this futile better beer resistance movement. Ignorance is Strength. Big Brother is Watching You. Cheers, Nathan