Congrats again to Bier, Mad Anthony, RAM, Sun King, Three Floyds, and Upland for bringing home medals from the Great American Beer Festival competition. Upland is celebrating their gold medal by releasing a limited number of the winning Sour Reserve Blend #2 at both the Bloomington Brew Pub and Indy Tasting Room this Saturday when they open for business (11am in Bloomington and noon in Indy). Each bottle is $25 with a limit of one per person. There are about 48 bottles available in Bloomington and about 36 in Indy so get there early!

Other GABF winners worth noting (i.e. there is a chance you’ll find them in Indiana): Boulevard Brewing Reverb Imperial Pilsner and ZON, The Bruery Papier and Sans Pagaie, Goose Island IPA, Left Hand Sawtooth Ale, Leinenkugel’s Summer Shandy (seriously), Rogue Hazelnut Brown Nectar, Sam Adams Double Bock, Sierra Nevada Estate Homegrown Ale and Imperial Stout, and Two Brothers Domaine DuPage (highly recommended) and Ebel’s Weiss. Then there is the triple crown that represents the American-style lager category: PBR, Miller Lite, and Keystone Light. The big win prompted a little trash talk from Pabst which was met with this response from New Albanian. Happy anniversary to a couple of prominent Indiana breweries. Shoreline Brewery is celebrating their 7th anniversary with live music Friday and Saturday night, an Oktoberfest menu, and $2 pints all weekend! Triton Brewing in Indianapolis rings in their first anniversary of brewing on Saturday with live music, food, special brews, and the official dedication of their new Beer Garden. Further details have emerged on Sun King’s second collaboration with Oskar Blues. The Deuce is a Hopped Up Brown Ale with 100% Galaxy hops weighing in at 69 IBU and 7% ABV. The collaboration again made a point of using a special ingredient from each brewery’s region. The Indiana contribution is Riehle’s Select Gourmet Popcorn, also featured in Sun King’s Popcorn Pilsner, which was used in the mash with Colorado Malting Company’s Belgian Pale Malt. The Deuce will be packaged in Ball Corp. Alumi-Tek re-sealable aluminum pint bottles and should make an appearance in our market soon. Hardcore fans of sour beers have found a new holiday in Zwanze Day, which offers an opportunity at various global locations to try Cantillon’s recent vintage of specialty Zwanze lambic. This year’s event was delayed until December 1st after Cantillon determined this year’s batch would not be ready and decided to revive the original rhubarb lambic recipe that generated the first Zwanze in 2008. There are no Zwanze Day participating locations in Indiana, but events at West Lakeview Liquors in Chicago and Holy Grale in Louisville offer chances to join the celebration within an easy drive. While it’s not an Indiana brewery, I qualify as an obnoxiously unabashed enthusiast of Founders Brewing Company. If you’re not familiar with their story, this article gives a great background on how the brewery nearly filed bankruptcy turning out uninspired pale, amber, and wheat ales and dumped their old lineup in favor of a new strategy that pushed the envelope of what consumers had experienced in the craft beer world. The rest of the story is history that is still being written. Founders celebrates their 15th anniversary this year with a 15% ABV “Bolt Cutter” barleywine and an appearance in Food Republic’s top 10 craft beer power rankings. One perk for reporters covering the presidential debates is access to free food and beer courtesy of Anheuser-Busch. Yes, your favorite Belgian-owned brewery has decided to continue their tradition of sponsoring American political theater since 1996. And should you grow tired of the partisan bickering, you can switch over to the hospitality tent’s own propaganda Twitter Feed and glean such nuggets as “nothing more American than great debates and great beer” and “AB products seem to be clear winners on this debate night”. Those are about as original as the political talking points we can all recite in our sleep by now. So in the spirit of true debate, I’d like to offer this slightly alternative evaluation of such products. 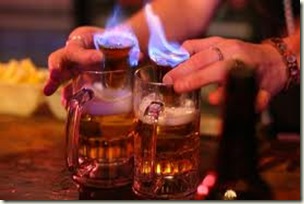 For a detour into the absurd this week, a Scottish brewery claims to have produced a “beer” that somehow finished with a whopping 65% ABV through a special freeze fermentation method. Now, this was a little bit fun back when Sam Adams and Dogfish Head were pursuing the title of world’s strongest beer towards the 25% level. Since then, European breweries have pushed the threshold past the 30 and 40 percent barrier leading to this point where you have to wonder when enough is enough. If you feel the need to consume a beer at this level and can’t get your hands on any Aberdeenshire Armageddon, here is one possible alternative. Take your favorite barleywine and rig up about a 50/50 blend with Everclear. Hold your nose, take a drink, and be secure in the knowledge that any onset of blindness is likely just a short-term inconvenience. Cheers, Nathan