There is a full slate of beer events to look forward to this Saturday headlined by the annual Festiv-Ale beer tasting event in Indianapolis and New Albany’s inaugural Indiefest, to which The New Albanian is contributing the Southern Indiana Craft Beer Showcase. Flat 12 kicks the day off with their own Summer’s Bitter End re-tapping of the season’s special festival beers. And this month’s “Oktoberfest for all” campaign continues with Upland’s inaugural celebration at Military Park in Indianapolis while the Fishers Oktoberfest offers up the traditional lineup of Warsteiner, Leinenkugel’s, and Coors Light! Well, there will be live music. And it’s free. 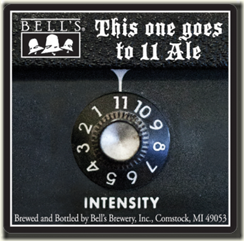 To commemorate their 11,000th batch, Bell’s will be releasing an 11% ABV Imperial Red this month aptly titled This One Goes to 11. The beer features a cornucopia of hop varieties with Galaxy, Motueka, and Summer from the Southern Hemisphere and Simcoe, Citra, and the new Mosaic from the Pacific Northwest. Bottles will be released in six-packs which means it will likely be a small investment for the consumer, but pony up knowing that you’ve acquired 72 ounces and Bell’s still hasn’t resorted to overpriced bombers. New Holland is using their line of premium spirits to flip the script on the trend of aging beer in whiskey barrels. Their Beer Barrel Bourbon is a craft Bourbon Whiskey aged for 90 days in oak barrels that contained their Dragon’s Milk stout. New Holland describes the final flavor as round, rich and pleasing with biscuit notes and a smooth malt character. Beer Barrel Bourbon will be available beginning October 1st. For more barrel madness, Goose Island’s Bourbon County Stout was released for distribution to Indiana this week. Conventional wisdom is that it will be easier to find this year as five times as much was brewed compared to 2011. We’ll have to see how that translates to the Indiana market as Goose Island has bumped up distribution ten fold in the Chicago market alone. If you’re in the Chicago area, there should be a release of Coffee BCS and Cherry BCS towards the end of the year. Congrats to the Cicerone program for passing the 15,000 mark of graduating students. Student enrollment tripled in 2011 and is up another 60 percent in 2012. The Cicerone program encompasses all aspects of the hospitality industry. Students learn about beer styles, quality, and tasting but the program also expands knowledge on storage, serving, and food pairing. If you’re in the hospitality industry, or just want to expand your own knowledge, you can find more information about the program here. Are you among the Rate Beer Reviewers/Beer Advocates of the world who believe that Westvleteren 12 is the best beer on Earth? I found this writeup on a blind tasting of Belgian Quads (or strong dark abbey ales if you prefer) to be a good read. Once the labels came off, Westie 12 and Chimay had somewhat lackluster performances. Granted, these are individual opinions that you may or may not agree with, but it raises an interesting question about how much our impression of a beer is enhanced by exotic ideas of monks brewing in a monastery or similar externalities. 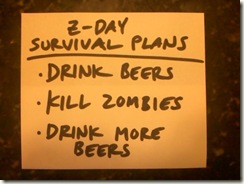 Back in the 1950s when people had serious apocalyptic scenarios to consider (as opposed to the current imagined Zombie apocalypse that has taken hold), the U.S. government tested the effects of atomic explosions on soda and beer to determine if they could be used as an emergency water source in the wake of a nuclear attack. Scientists determined that radiation levels were “within the permissible limits for emergency use” (why does that not sound very reassuring) and as a bonus the taste tests rated the contents “acceptable”. To my knowledge there is no study validating the safety and quality of beer during a Zombie apocalypse, but I’ve been stocking up for years anyway. Better safe than sorry. Ever wondered if you could open a beer using items like a wheelchair, skateboard, rake, machete, pick axe, or nail gun but didn’t feel like injuring yourself? Well, unsurprisingly a few people popped up on the internet that have your back and all the answers can be found in Bottle Cap Blues. Please be aware that the author’s comment “I encourage you to try it” is not endorsed by this site or most sane people in the world. Cheers, Nathan