Can’t find anything to do Saturday? Then you must not like beer! We have the return of Brew Bracket with a special showdown of local bourbon barrel aged beers and additional events in Bloomington, Indianapolis, Nashville, Noblesville, Terre Haute, and Valparaiso that you can find on our calendar. I’m throwing in the towel the minute word comes out about a beer festival in Flora. But on a serious note, there is so much going on these days that we do welcome and appreciate any tips from our readers. So here we go…… Federal and State permits have been approved and equipment is starting to roll in at the new Planetary Brewing Company located near Old Town Greenwood. Check them out at the linked Facebook page to monitor their progress. Thanks to William Breuninger for the tip. 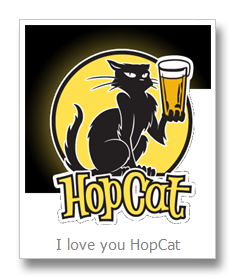 Congrats to the Hopcat in Grand Rapids, MI for being named the second best beer bar in the country by readers of CraftBeer.com. For good measure Founders’ Taproom (within walking distance) was second place in the North Central region. The HopCat was previously named the #3 Beer Bar in the world by Beer Advocate magazine. OK, so it’s not Indiana news but you’re not really living without an annual trip to Grand Rapids……or maybe I just have a problem. We hope to avoid making stories like this a trend, but the weather of 2012 has claimed its first victim. Bell’s seasonal Cherry Stout will not be brewed this year after early warmth followed by multiple frosts damaged Michigan’s tart cherry crop this spring. Some kegs from last year’s batch are still in storage and will be released in limited numbers. Attention “beer collectors” – your days on eBay are numbered. The site will begin removing listings for beer and liquor after 20/20 decided to save modern society by hiring a teen to buy vodka from their marketplace. Bloodsuckers dreaming of $250 for a bottle of Dark Lord are not stoked. According to The Economist, the average U.S. worker has to work five minutes to afford 500ml of beer. Things look pretty good for Americans compared to the other countries in the study with Indian workers facing nearly an hour of toil for their brew. It also doesn’t paint a pretty picture for the rational few who threaten relocation to Canada or Mexico if the election doesn’t go their way. Indiana is well represented on a recent top 10 list of the best beer website underage redirects. Earning prestigious spots on the list were Black Acre (He-Man singing 4 Non Blondes), Sun King (the Muppets take on Rick Astley), and Upland (redirect to Justin Bieber’s site). But my vote goes to Trumer Pils for subjecting youngsters to dancing men in painfully short lederhosen. The blog STL Hops hosted a contest for readers to apply their Microsoft Paint talents to a Three Floyds Dark Lord theme. The winner is below and all finalists can be viewed here. The winning entry was submitted by Tyler Dumey and depicts Dark Lord Day with (as described by the blogger) “beers attacking bunnies and flowers, lava, brimstone, and sperm falling from the sky”. It’s unclear what events at Dark Lord Day inspired visions of electrocuted flowers and sperm in the sky, but next year you might want to make sure the guy standing next to you in line doesn’t answer to “Tyler”.