Well, well, well, who was the blogger that thought we were moving out of festival season? Looking at the calendar, the 15th brings the Hoosier Hops and Harvest Festival in Nashville, the 22nd offers the Festiv-Ale and Upland Oktoberfest in Indy, and the month wraps up with the latest Brew Bracket throwdown of bourbon barrel aged beers. But how about this weekend…….. 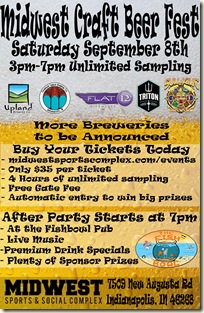 On Saturday craft beer lovers around South Bend can hit up the Fourth Annual Zoo Brew at Potawatomi Zoo, the Fort Wayne area has Mad Anthony’s OktoBEERfest, and Indy will host the aforementioned Midwest Sports Complex Craft Beer Festival. Last but not least is the return of GAKfest, better known as the German-American Klub’s Oktoberfest, making a Thursday-Sunday return to south Indianapolis. Sure, it’d be nice to get something a little more authentic than Leinenkugel’s Oktoberfest at the beer trailers and they somehow manage to find new ways to make you drive farther to a parking spot. But there is a certain charm to this traditional, kid-friendly festival, kind of like your local county fair with lederhosen. Thanks to social media, you can view near daily progress of a brewery being built – Union Brewing Company in Carmel that is. Looks like those of you who have sordid dreams about stainless steel will still need to wait a few days. For those who have complained about Three Floyd’s $35 price tag on their recent Templeton Rye barrel aged releases (c’mon people….they are hand labeled and wax dipped), Sam Adams has heard your concerns and is coming to the rescue with…..Utopias 10th Anniversary Edition? This massive “extreme beer” will net out between 28-30% ABV and has spent time in Buffalo Trace bourbon casks, Tawny Port casks, Vintage Ruby Port casks from Portugal, and Rum barrels from Nicaragua. Oh, and it retails for $160 per bottle. Enjoy! Very limited details have emerged on a new collaboration between Sun King and Colorado’s Oskar Blues to follow the Chaka Belgian-style pale ale. The new brew will mirror Chaka’s packaging of Ball Corporation’s resealable Alumi-Tek aluminum pints and sport the moniker “The Deuce” (I hope assume this is simply referencing their second collaboration). Details of the collaboration and limited tapings will occur around the Denver area during the Great American Beer Festival. Olympic runner Nick Symmonds allegedly broke the American record for the Beer Mile (who verifies this stuff?), an event where the contestant chugs a beer before each of the four laps around the track. Symmonds’ time of 5:19 may have been good enough for the American record books, but falls short of Canadian Jim Finlayson’s 2007 record of 5:09. If you watch the video in the linked story you’ll easily see where Symmonds fell short. Guy is a great runner, but those last three chugs left a bit to be desired. 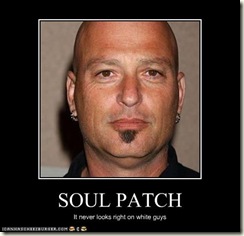 The brewers with beards craze continues as recently highlighted with Sun King’s You don’t have to have a beard to work here…. video and the opening of Beards Brewery in Petoskey, Michigan. Well, that’s great but those of us who don’t have the genetics to grow a proper one are starting to feel left out. Sure, I know that John Maier from Rogue supposedly harvested a yeast strain from his whiskers, but is it really that important? That’s why I’m thrilled to bring you an exclusive announcement on plans for Soul Patch Brewing. The staff will be comprised entirely of facial hair failures including myself, Howie Mandel, and Joey Greco from Cheaters. Patch pride baby! Cheers, Nathan