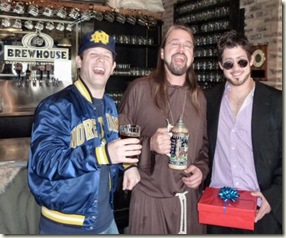 3 years ago Jim Dunbar, a regular customer at Oaken Barrel suggested to Mark Havens (right) and Andrew Costner (left) that they make a pumpkin beer. After some research and experimentation they did just that last year.
The recipe includes caramel malt for richness, Victory malt for a taste of bready crust, and some pumpkin pie filling. It went down a treat in 2008 and they saved a bit back, as always, for special occasions.

Fast forward to June, 2009. Mark and Andrew are sorting through all those saved samples to prepare for the Indiana State Fair Brewers Cup. The Pumpkin is now even better than 8 months before. Send 3 bottles in to the competition.
In July, the Herb, Spice, and Vegetable category is judged by, among others, Gordon Strong – not just of the most respected BJCP Judges in the country but also the President of the Beer Judge Certification Program. The panel gives Oaken Barrel’s Pumpkin the win, one of two gold medals for OB (the other was for their Altbier).

All in all, Oaken Barrel won 2 gold, 2 silver, and 2 bronze medals. Upland, meanwhile, won 4 golds, a silver, and 2 bronzes. There’s a points system for Brewery of the Year and Upland is ahead, 16 to 12 as I recall. The last award announced is the Best of Show, worth 6 points. (cue drumroll) 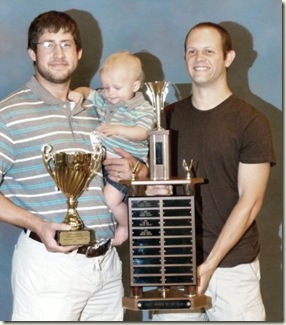 We’ve been told Gordon Strong led the charge, championing what he called “Like liquid pumpkin pie” to the Best of Show victory. The extra points lifted Mark and Andrew into the Brewery of the Year prize.

Now, the 2009, renamed Pum-Kwan for Kwan Casey, owner of Oaken Barrel, is ready and serving at the brewpub in Greenwood.

First, it’s a beer. Many squash suds completely mask the malt. Pum-Kwan has the nutmeg, cinnamon, and ginger necessary to make you want to pick up a fork and some Kool-whip, but it’s an attractive beer and a beer that, unless you just don’t like the spices, you can drink more than one.
For more info about Pum-Kwan, see this week’s  Beer buzz.
This win gave Oaken Barrel it’s fourth Champion Brewer award (including 2005, 2006, and 2008) and their 2nd 4th Best in Show (the others for 2006 Uberweizen, 2001 Meridian Street Lager, and 2000 Gnaw Bone Pale Ale). (thanks Fred)

The Brewing Monk in the trio up top? That’s John Treeter, the new Assistant Brewer at the Barrel. You’re in the best brewery in the state.