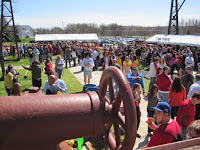 Neither weather, beer, nor people could have been better for the Bloomington Craft Beer Fest 2015. Sunny, nearly 70 degree weather made this historic venue one of the best places in Indiana to meet brewers, sample craft beer, and generally enjoy the day. The beer samples were too numerous to count! However, one brewery, Function Brewing of Bloomington had TWENTY SEVEN different beers on tap with the most popular being a sour cherry milk stout followed by a ginger lemon golden ale.

Here are some of the ones our crew was able to try:

Ross says: This year I decided to volunteer at the festival and worked as a part of the brewer services team. I met a lot of great people, and because the festival was so busy my time to sample was limited. Whether you volunteer or attend, it’s a worthwhile experience and I would highly recommend it. Because I was tight on time, I made sure to visit the cask tent. Unsurprisingly, there were some tasty and creative offerings. Here’s my rundown of a few I really enjoyed: 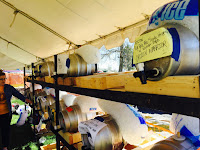 Black Acre’s Mandarina Pale Ale with Fresh Blood Orange Zest and Citra. Right off the bat I was hit by a wave of juicy, citrus aromas. It tasted much like it smelled (and that’s a good thing.) The lower bitterness made this a real easy drinking beer and complimented the warmer afternoon weather perfectly.

Bloomington Brewing’s 10-Speed infused with Blueberries. Whether it’s bottled or on draft, BBC’s seasonal release is one of my favorites, and I could not pass on an opportunity try it from a cask. The fruit character paired nicely with the Mosaic hops to create a flavorful and refreshing wheat ale. The gentle carbonation typical of cask ales worked perfectly with this beer and I really enjoyed its smooth mouthfeel.

Upland’s Vinyl Tap Rye Pale Ale, Dry Hopped with Simcoe and Amarillo. This beer is not available year-round so I always try to seek it out. I was pretty excited my first opportunity to drink it this year was from a cask. A nicely balanced pale ale with some subtle spiciness from the rye and the dry hopping really upped the ante on those citrusy notes in the aroma.

Gary Cooper, our guest blogger, says: I’ve been drinking craft beers for the past 6 years when I discovered all beers were not created equal. I have been all-grain home brewing for the past 3 years and a favorite gift I received, is a set of Spiegelau beer glasses from my wife. Here are a few of beers I really enjoyed at the 5th annual Bloomington beer fest. 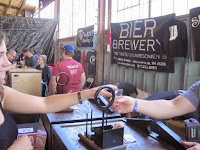 Bier Brewery, Indianapolis, Kolsch-A very good, refreshing beer that was not too bitter; had a nice dryness.

Brugge Brasserie, Indianapolis, Tripel de Ripple This is my go-to for Indiana “Tripels.” This spicy beer had a great mouth feel and a fruity-sweet taste, without being boozy.

Function Brewing, Bloomington, Cayenne Pepper Stout This stout had all the flavor of Cayenne peppers without the heat.

Noble Order Brewing company, Richmond, Blood Orange Mead This was really flavorful, the orange came through nicely, and it had just the right amount of sweetness.

Taxman Brewing Co., Bargersville, Belgian Cherry Dubbel Nice and malty, had a hint of cherry with a clean finish. 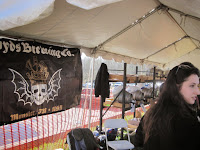 Three Floyds Brewing Co., Munster, Berliner Weisse Very true to style and not hopped out. I went back for seconds.

Wabash Brewing, Indianapolis, Bacon Face Brown-I’m not usually a brown fan, but this is on my list of top Indiana browns. It is an easy drinker with a hint of honey.

Zwanzigz Brewing, Columbus, Imperial Stout-This stout was packed with lots of roasty flavors that nailed it at not being too sweet or too bitter.

Greg Kitz adds: I love this festival as it is a beautiful, well-organized venue. We could only wish there was a way to sample from all 55 breweries on site; yet my notes tend to trail off as I talk and sample. Here are just a few highlights. 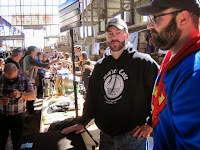 Basket Case Brewing, Jasper, the Oaked Revolution is their English Pale Ale aged with oak chips; I got vanilla from the oak with interesting American & English hop notes. This stands out as this is a restaurant with a small nano-brewery still producing interesting, fun beer.

Bloomington Brewing, had not only the Hoppy 10-speed with mosaic hops but running through a randall that had too many ingredients to note; all I can say is this created a very pleasant explosion in the mouth of hops and fruit.

Black Acre, Indianapolis, IPA w mandarin oranges was one that several beer lovers we know recommended and it did not disappoint. We know Black Acre produces solid, popular beer and the balance in this beer was really nice.

Chapman’s, Ft. Wayne, Kolsch style – this crisp clean ale with a very slight bite at the end would be one I would go back for. 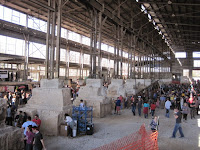 Function, Bloomington, must mention the sour cherry milk stout as a delicious combination of the lactic sourness, the roastiness of the stout, and overlay of cherry.

Salt Creek, Bedford/Bloomington had the Out-of-Order Double IPA that reminded me of “Sierra pale on steroids” delivering a lot of traditional American hop flavor 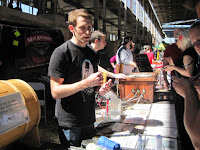 Taxman, Bargersville, poured a beer that went down smoothly but was 10% plus, a heavy beer (originally their TaxHoliday) with charred jalapenos, habaneros & red chile peppers.

Wabash Brewing, Indianapolis, I repeat the Bacon Face Brown not only because it is a very good brown but the beer is named in memory of a favorite bulldog who had the name “Bacon Face.” You just gotta love that story and the beer.

Zwanzigz, Columbus, I always look for Mike and this year in addition to regular offerings including ghost chili pepper stout, there were 2 most unusual beers. A bacon beer was a golden ales base with 5 pounds of bacon steeped in the keg (just like dry hopped, but with bacon); Mike also took his Russian Imperial Stout base and before our eyes added drops of pepper infusion from the Carolyna Reaper pepper currently rated as the world’s hottest pepper. With just the right amount I got a nice flavor and a nice but tolerable burn on top of that wonderful RIS base.

Of course, there were many more that would deserve mention if we could just get to all breweries. There are many opportunities to try more beers at some upcoming festivals.

A short list of some upcoming SPRING/SUMMER Indiana Beer Festivals are:

May 30: Fest of Ale by Keg Liquors, Clarksville, IN (Charity for Louisville/Southern In Crusade for Children) INFO CLICK HERE

May 30: American On Tap, Indianapolis, CLICK HERE FOR INFO

August 8: Pints in the Park, Highland, IN, CLICK HERE FOR INFO