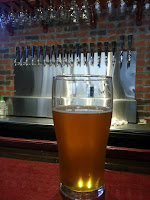 Bloomington Craft Beer Week has begun! We were already able to drink a Hop Strike India Pale Lager collaboration beer which delivers tropical and deep fruit flavors and a nice clean finish. Hop Strike is a collaboration by Bloomington Brewing Co., Function Brewing, Quaff On Brewing, The Tap Beer Co., & Upland Brewing. Eight different hops were used along with lager yeast and, perhaps for fun, some hops were added using a drone! This beer is on tap at cooperating breweries while it lasts. #BCBW is on!

Events start today, Saturday April 4, including a release party of 10-Speed Hoppy Wheat on tap & in a firkin at Bloomington Brewing’s Lennie’s pub, at 4:00 with prizes at 5:00. There is a bicycle tune-up station outside starting a 3:00. 10-Speed has Mosaic hops for that citrus, pineapple flavor.

Earn a free glass and chance to win a VIP brewery event on the Bloomington Ale Trail. Visit all six of these locations (over time) and get your passport stamped for drinking a pint at each: BBC (Lennie’s), Function, Quaff On B’ton, Salt Creek @the Depot, Scotty’s B’ton, & Upland.

All events lead up to The Bloomington Craft Beer Festival on Saturday, April 11, 1:00pm (early bird) or 2:00pm (Gen’l) to 6pm. A FEW TIX MAY BE STILL AVAILABLE HERE

Here are some other events (always check with the location for confirmation or changes):
Sunday, April 5: 7 IN Beers on tap at The Trojan Horse including BBC, Sun King, Upland

in other INDIANA BEER NEWS:

Saturday, April 11 is also a day for a 5pm tailgate in the IUPUI parking lot Indianapolis with food, music and Flat 12 beer supporting the Indy 11 pro soccer team.

Upland also announced it will launch collaborations with Yazoo Brewing of Nashville, TN, and Great Raft Brewing of Shreveport, LA with details in the future.