The explosive growth of craft breweries in Central Indiana has been closely followed by the emerging craft trend of experimenting with barrel aged beers. New programs have been initiated by many established breweries, while new breweries often begin barrel aging from the moment they open for business. Aging in empty bourbon barrels has become a particularly popular activity, as the bourbon and oak characters can pair nicely with some of the big, aggressive styles that American craft brewers favor to begin with. A recent tapping event at Tomlinson Tap Room offered a unique opportunity to sit and evaluate a number of local examples side by side. Granted, you may be able to find a number of these beers together at a large festival, but you might run a little short on the “sit and evaluate” aspect. Breweries participating in the special tapping included Barley Island, Black Acre, Bloomington Brewing, Flat 12, and Sun King. All base beers were ReplicAles from 2013’s Winterfest, aged for an unspecified period of time in bourbon barrels. Despite the ReplicAle label, where brewers are supposed to interpret the same basic recipe, there were some significant differences in underlying beer style here. Most were labeled with the pretty nondescript “Strong Ale” classification, while two others were appropriately classified as an Old Ale and a Winter Warmer. Here are my thoughts on each beer: Flat 12 Bourbon Barrel Aged Old Ale  IBU: ???  ABV: 11.5% Very strong bourbon aroma with supporting oak character and muted malt in the aroma. The flavor is more balanced with a well-aged caramel malt backbone showing hints of a slightly oxidized sherry character. The 11.5% alcohol content is very evident in the warming character, which has a smooth quality from aging. Overall, there is still too much bourbon flavor and aroma for my tastes. But this one is definitely a grower and I liked it more with each progressing sip. Of course, that could also be the 11.5% working its magic on my brain. Bloomington Brewing Bourbon Barrel Aged Strong Ale  IBU: 12  ABV: 8.5% The aroma here is much more subdued after tackling the massive Flat 12 Old Ale. The barrel character initially seemed to be overshadowed by the malt, but the aroma seemed more balanced when I came back to it later. The barrel contribution is more noticeable in the flavor, balanced with the toasty malt character and some chocolate notes. The finish comes across drier than expected with a slightly tart aftertaste. There are some good characteristics here, but overall it struggles to stand out when progressing through this lineup. 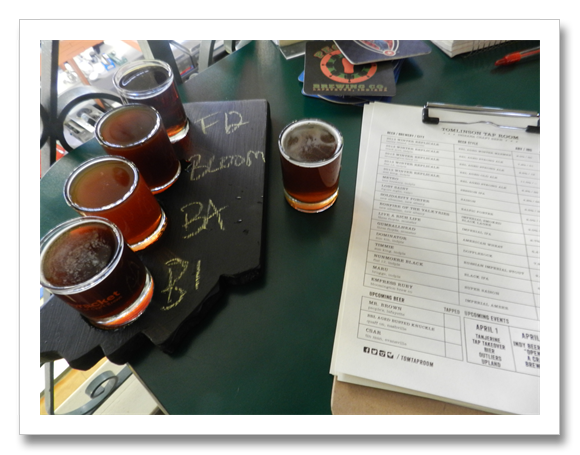 Black Acre Bourbon Barrel Aged Strong Ale  IBU: 51  ABV: 7.8% The aroma and flavor of the barrel is very subdued in this beer. The real star of the show here is the massive hop character and supporting bitterness, which are still quite impressive in spite of extended aging. There is good dose of caramel and slightly oxidized malt character that support the hop profile a bit more than the barrel flavor. I like this beer a lot and imagine it had quite an intense hop profile when it was younger. If someone paid a premium price for this as a barrel aged beer, they might be disappointed by the lack of assertive barrel character to be found here. But if we’re just talking about which beer I enjoyed the most, this one ranks pretty high on my list. Barley Island Bourbon Barrel Aged Winter Warmer  IBU: 50  ABV: 8% Nice balanced aroma with the barrel character adding complexity to a backbone of caramel, chocolate, and roasty malts. The flavor matches very closely to the aroma with some oak tannins also coming through. The finish is very smooth with a slight warming as it goes down and some bourbon character lingering in the aftertaste. The reported 50 IBUs don’t contribute a high perception of bitterness. This is what I look for in a barrel aged beer. It’s a great Winter Warmer with a barrel character that complements, rather than overwhelms, the base beer. Sun King Bourbon Barrel Aged Strong Ale  IBU: 50  ABV: 8.2% Strong barrel character in the aroma with a unique toffee malt character. The toffee malt is more balanced with bourbon and oak in the flavor, with a firm bitterness and oak tannins lingering in the aftertaste. There is also a bit of tartness in the finish of this beer. Good beer – the toffee malt character is enjoyable and really stands out, but it’s also a bit one-dimensional in comparison to some of the other beers in this lineup. After several runs through the lineup, I settled on the following ranking order:

Barley Island was the pretty clear winner in my book. I thought the greater emphasis on chocolate and roasted malts in this beer paired very well with the bourbon and oak. It also had the best overall balance of the five beers in this flight. Second place was a much closer call. While Sun King’s beer was probably a superior example of a “barrel aged” beer, I found Black Acre’s just a bit more enjoyable despite the lacking barrel character. Flat 12’s submission definitely grew on me and would arguably be the best choice for someone who enjoys a very prominent bourbon character, but the balance was just tilted a little too far in that direction for me. And while there was nothing I particularly disliked about the Bloomington beer, there was little I could pinpoint to make it stand out in this flight. Did anyone else make it out to try this flight? Agree or disagree with where I slotted them? Cheers, Nathan