Since discovering the existence of Brew Bracket last year on my 30th birthday, I have loved coming and participating in this completely unique event, that not only features 16 local breweries, makes you the judge, but helps out with a local charity as well.

On December 8th, Brew Bracket came back again to the Indiana State Fairgrounds with a Amber Ale showdown, called AMBERgeddon. The past winning Brew Bracket contenders were all there along with general favorites and newbies to find out who was the best of the best when it comes to amber ales.

This Brew Bracket had a new voting tally and procedure, making it quicker to tally, save paper and you got a cool little bracket to follow along with.

It also had the presence of some local food trucks, Spice Box Indy, Byrne’s Grilled Pizza and Der Pretzel Wagon. Previous Brew Brackets had a small cafe style food location, but the addition of the food trucks really brought out the feeling to support your local vendors.

Unfortunatly at this Brew Bracket, Bulldog Brewing Co. couldn’t make it down, so it left 15 breweries going head to head: 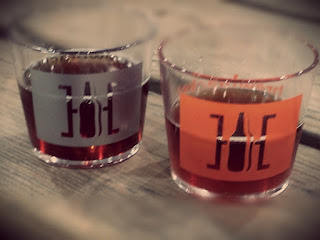 The tasting starting promptly at 1pm and off the bat it was hard to make a vote. A lot of the amber ales seemed to me to be aggressively hopped, which is not something I am used to in an amber. I prefer something a little more smooth.  I did learn that Bier Brewery had a bourbon barrel aged Amber and I guessed and later confirmed that Mustache Ride Red was roaring through Brew Bracket courtesy of Flat 12.

Despite the overly hopped ambers, I’d have to say this Brew Bracket has been my second favorite one so far. The first one is obviously the Stouts competition, mostly because I’m biased and stouts are my favorite. The best thing about Brew Bracket, which I continually point out over and over again is that the average, everyday beer drinker gets to be a part of an event that THEY decide what is good, and what should win.

And after 5 rounds of taste testing.. the people had spoken to make Andrew Castner, head brewer of the The Ram, the AMBERgeddon winner with his Buttface Amber:

Andrew is a dangerous Brew Bracket contender now. This is his second win in a row, after Big Horn Maibock won at the BBIV: Bourbon Barrel Aged.

The question is will he go three in a row for the undetermined Brew Bracket 6.
Which btw.. I am secretly hoping  the style will be Porters


We hope if you went out to Brew Bracket you had a good time, hopefully you met me, in my beer socks of course, or Nathan, or the lovely Poppi.  If you didn’t come out, then come in the Spring!