A couple of months ago, while following my twitter feed, I found out about Brew Bracket.  I knew instantly that I must go to this event. Not only for the fact that it was a new and interesting way for beer lovers to decide the winner of an event, but because it was all about stouts, one of my favorite beer styles, and it was my 30th birthday, which to me equaled – my destiny to attend. 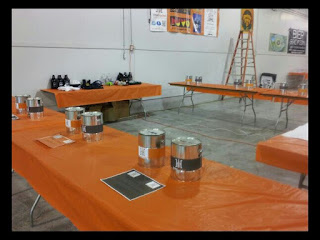 The basics of Brew Bracket is simply this — Blind taste testing of 16 local breweries versions of Stout. March Madness style with four rounds. After the fourth round, a winner is declared.

The event was held at the Indiana State fairgrounds from 1-4:30.

Upon entering you receive two tasting glasses, a pen and a voting tablet. Each sheet has a gray or orange option and after tasting you cast your vote into a paint can.

Round one was separated into two parts 1a and 1b since there were only four corners to taste and only two beers at a time.

Unfortunately two breweries didn’t make it to Brew Bracket, so two lucky breweries had a bye on Round 1: Triton Brewing Company and Bee Creek Brewery.

The event overall was pretty well organized. Definitely low key. there were picnic tables scattered through out the all with oyster crackers in bowls and stickers from some of the participating breweries  Along the wall were gate-leg tables with more crackers and hundreds of bottles of water. Each side also had a rinsing station. Towards the East end was a food vendor and in the middle the prize stage, voting area and announcement area.

One part that was really nice was a live twitter feed wall, where any tweet with the hashtag #BBStouts would pop up onto the wall.  The goal was to get #BBStouts trending on twitter for Indianapolis about about 3/4 through the event, we succeeded!
**Yes, my twitter name –
KJLSlauzis was up on the
wall a lot**

On to the Beer Highlights: 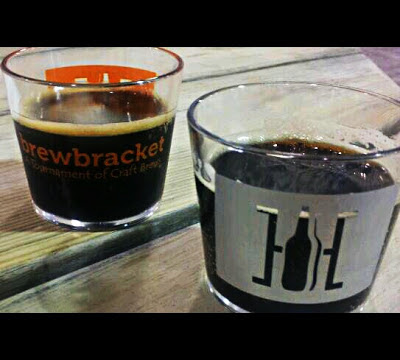 First.. I want to say that the two breweries in the finals appear to be the only two breweries who actually brewed a stout specifically for Brew Bracket.  Because of that I am glad they ended up being 1st and 2nd place.  Not that the other stouts weren’t good, I know I’ve bragged about Upland’s Mother’s Milk stout before, but I think it was nice to have a new stout to try.  Instead of comparing previous tried stouts. 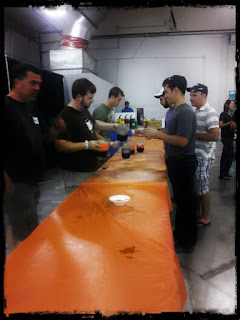 Secondly.. It was great that some of the newer breweries like  Twisted Crew & Triton were participants in the competition.
Coffee or Oat stouts seemed to be the favored styles for each
brew.   Unfortunately there wasn’t a way to tell at the end which  one you really did vote for, but I know there was a stout that had an aroma and taste of banana. Which made it seems like you were drinking a chocolate covered banana. By process of elimination
I’m leaning towards saying it was Brugge Brasserie’s Black.
Triton’s Stout was their Deadeye Stout aged in a Bourbon Barrel, which I am a total sucker for Bourbon Barrel aged anything.. even   an IPA ( see New Albanian B’urban Trotter – A bourbon barrel aged Imperial India Pale Ale)
Classic favorites where there as well:
Upland  – Mother’s Milk Stout
Flat 12 – Lacto Matic Milk Stout
Bee Crew – Clay County Coffee Stout

After 3 1/2 hours of tasting, contests, food and talking… a winner was announced:

www.bierbrewery.com
Fuggit Stout!
A stout that Darren literally said Fuggit and put in all they had into it!

I’m really glad that as a local brewery that I frequent often, due to their great quality bier, won the Stouts competition  Congratulations Darren, Corbin, Jerry, Tara and all associates of  Bier Brewery. Hope to see your trophy in the tap room.

The event was great to be part of and I’m glad I chose this to do for my birthday. I can’t wait to see what the spring version will be about! 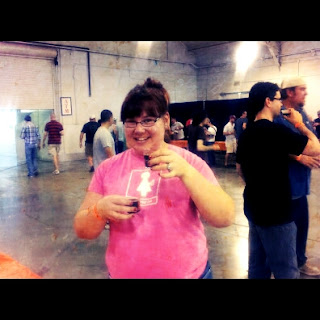 A final shout out: