Bloomington, IN, has been abuzz with beer this week as the festivities continue right up the to Bloomington Craft Beer Festival, Saturday (April 12). Tickets are on sale online and at Big Red Liquor stores with the plan being NOT to sell tickets at the door. 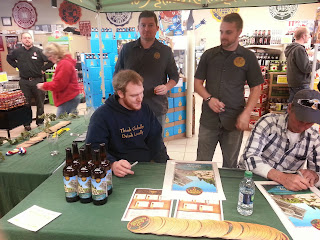 This is a recap of some of the activities this week with pictures!

The week started with Indiana Craft Beer on tap and in bottles at most local venues Friday and then the release of Bloomington Brewing Company gold-medal winning Rooftop IPA in 22 oz. bottles at the main Big Red Liquor store in Bloomington.

Brewers Floyd Rosenbaum and Nick Banks, owners Jeff Mease and Lennie Dare, Business Manager Mark Cady, and staff were on hand to sign bottles and posters as the first batch is available. The bottles will roll out within weeks to other locations in Central Indiana. BBC reminds all that this 22 oz Rooftop will be followed by Ten Speed Hoppy Wheat, and eventually by Ruby Bloom Amber in 22oz “bombers.” BBC has been flowing around Bloomington and has eleven beers on tap at their Tap Room in Lennie’s including a big, bold Imperial Ruby Bloom amber, the Biere de Mars, and the collaboration with New Albanian 80 Shilling session Scottish ale. 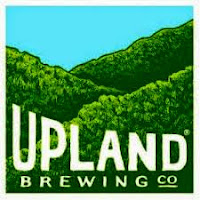 Upland Brewing of Bloomington chose this week to reveal their new logo! The former more abstract logo turned into an upbeat tighter view that may suggest the rolling hills around Bloomington of the freshness of craft beer! Upland will be using logo on future bottling and other signage for their beer. They also were on hand at Yogi’s on Monday for samples of their delicious Upland Haystack wheat, a crisp clean American wheat that is extremely drinkable and an interesting contrast with the Belgian-style Upland Wheat they’ve been known for.

Upland and New Belgium Brewing collaborated on two wonderful tart brews “Light Synth” and “Dark Synth” The Light Synth is 50% New Belgian Felix aged in wine barrels with 40% Upland Sour Reserve oak aged plus 10% oak aged cherry lambic with cherries. Dark Synth is 50% NB Oskar aged in wine barrels with 40% Upland Dantilion with spices and 10% oaked Rasperry Lambic with raspberries. With tastings at Yogi’s Grill and Bar on Monday night patrons were deciding which they liked best which depends on preference. We thought both were delicious! 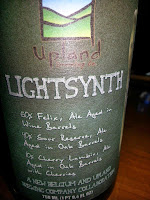 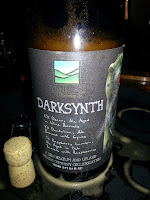 MORE PHOTOS FROM THE WEEK: 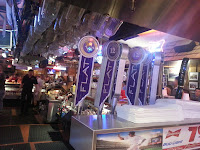 Jamie from Flat 12 and Mike Collins from World Class were on hand both Saturday and Sunday with the first event being a tapping at Nick’s English Pub. They had five beers on tap and provided many stickers and beer coasters to those who stopped by. Nick’s was full and Saturday night revelers were drinking up the Flat 12 beer and enjoying!

Flat 12 also stopped by Yogi’s on Sunday for a tapping including Nunmoere Black, delicious black IPA with wonderful balanced character.

Tuesday night there was a beer dinner at The Farm restaurant Root Cellar. We hope next year a dinner might be arranged closer to the weekend and more out-of-towners might come in early for the event and stay for the Beer Fest!

Tin Man Brewing of Evansville is Kegging beer now so there beer will be more available on draught. Fred Hillendbrand did a great job of leading “Beer School” with samples at Yogi’s. The Rosenweiss weizen with rose is a far cry from the first Tin Man brews and packs a nice combination of the rose and the banana spice notes. 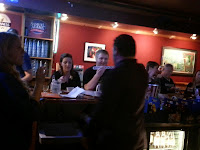 Overlord Imperial IPA is a balanced big bold tasty IPA. The sleeper is Csar Russian Imperial Stout at 12% with as many IBU for bitterness as Overlord but well hidden behind fabulous roast and hints of licorice. Tin Man will be distributed now throughout Central Indiana!

The shot at right are loyal Yogi’s fans enjoying their Tin Man brews!

Get your craft beer on and get to Bloomington.

Below are more events scheduled this week!

Cutters Knobstone Pale Ale will be the featured Friday beer along with Upland Wheat on tap at the Alley Bar on Kirkwood. 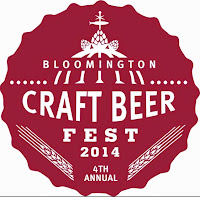 Bloomington Craft Beer Fest is Saturday, April 12, at 2200 Tapp Road 4-7PM for $35. Sponsor The Fourwinds Resort will shuttle you to & from the event from your room with special rates of $89. There will be live music, local food, hundreds of beers from not only most Indiana breweries but many regional and national craft brewers. We participated in a discussion of porta-potties and organizers have considered signage and locations of units to reduce lines. The current weather forecast may prove God and Mother Nature love beer as the sun should shine and forecasts predict temperatures of 71 degrees! If you’ve not been to the historic Woolery limestone mill venue expect a nice canopy of shade with plenty of filtered light and great breezes. Tickets are available at most Big Red Liquors locations (esp. Bloomington – call ahead) and online HERE
Further Fest details here

Then get ready to PARTY at many local venues AND save your wristband for a special deal on Sunday!

while many BBC and New Albanian beers should remain on tap from Friday, there is no official party at Nick’s on Saturday

Upland Beer Fest after party at The Bishop Bar

Max’s bar on the square will have a kill the keg party with BBC Rooftop IPA and Kirkwood Cream Ale where the person to get the last pint gets a Max’s gift card.

AND….
The premier craft beer bars in Bloomington will feature Indiana Craft Beer all week at The Tap Beer Bar and Yogi’s Grill & Bar. As well Scotty’s Brewhouse will feature their own Thr3e Wise Men Indiana beer

April 13:
Fest Wrist Band Day at Lennie’s Restaurant and Brew Pub 10% off Sunday Brunch at Lennies – Beer Fest attendees get 10% off their meal with their Beer Fest wristbands.