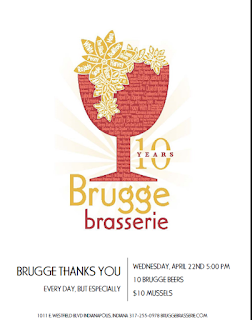 Brugge Brasserie, the Broad Ripple restaurant and brew pub with Belgian style beers, Frites, and Mussels, turns ten years old with a ‘birthday’ party on Wednesday, April 22. The celebration includes $10 mussels, one of the signature food items at Brugge, and ten special beers. Back in 2005 there were very few brewery/restaurants open in Indianapolis. Ted Miller had a concept. Bring the essence of Belgium, at least the beer, to Broad Ripple in Indianapolis. Ted had been living in Taiwan, wanted to bring Belgian Beer to the Indianapolis area and was talking with potential partners about food for a new beer bar and brewery. After eliminating most typical bar foods it came to them to try Belgian style food as well. They were unsure if the Indy community would embrace mussels. Boy has Indianapolis shown a desire for frites, moules (mussels in French) and more. Fast forward ten years to Wednesday and celebrate with the $10 mussels and special beers.

Among the beers will be Tres Mauvaise Chaton – the very bad kitty, a lactic gose-style beer, aged in a cognac barrel delivering 10% alcohol. In fact three of the special beers on tap will be variants of Bad Kitty and Very Bad Kitty: Super Kitty Fantastico – barrel aged sour, Super Kitty Fantastico Kriek, the same with cherries, and the Tres Mauvaise (loosely Bad Kitten in French). The “Kitty” beers are an interesting story. Originally brewing a Belgian White, something created a sourness in the beer. Ted shared with us that he rather liked the flavor and sampled this odd ‘mistake’ beer among beer judges. The experts suggested the flavor of a style called Leipziger Gose (pronounced Go… Suh, like stop/go and uh with the S). The Gose is a rather rare beer brewed with salted water, lactic for sourness, and coriander as well as hops. Ted recreated the beer using a similar base to the white and added the right other ingredients and technique. The Bad Kitty was born! The Very Bad Kitty is an Imperial version with more alcohol. We are greatly anticipating the Three new varieties coming this week!

Ed & Ted’s Bourbon Barrel Stout is another beer with a story. This tradition started with Brugge Black going into a barrel originally purchased for bottlings of bourbon at Indy’s own Sahm’s restaurants. As things change the parties at Sahm’s changed but this time Ted worked with Ed and Ed of Sahm’s to use a 1792 brand (owned by award winning Buffalo Trace Distilling/Sazerac) barrel to fill with a stout. Ted’s concept is that beer should taste like beer and then the bourbon, and he shares that this batch is right on the edge between a light bourbon flavor and pleasing those who want a shot in their beer. Yum!

Brugge has slowly transformed through growing years and the need to produce beer in larger quantities. Not all of the beer can be or is brewed on site allowing for local experimentation on the in-house smaller system and the consistency of a larger facility literally down College Avenue but downtown on North Street where a future restaurant will join the family, now under construction during our visit this week.

Festivities, with tent and a lot of outdoor seating, will start at 5PM, Wednesday, April 22 at the Brugge Brasserie, 1011 East Westfield Blvd. in Broad Ripple Village of Indianapolis.