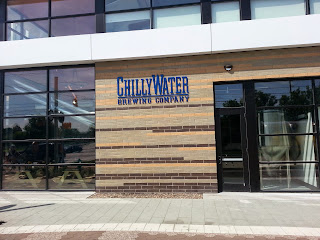 We stopped by Chilly Water, 719 Virginia Av, Indy, just after the big lunch rush on opening day, Friday, June 27. This new brew pub scored a home-run on beer, food, and service as far as the two of us are concerned. That was true of the folks sitting next to us from Dallas, TX. also! The Texans just happened along, scored food they devoured, sampled beer and took a growler, and after asking how long CW had been open (counted almost in minutes as that point) said they hope they can make it back.

What may be unique for Chilly Water is the music! The 60 people who get in for the first show tonight (June 29) by 7:00 will hear David Gans, famous for hosting the Grateful Dead Hour (syndicated radio) and Tales from the Golden Road (Sirius Radio). Gans is a solid songwriter and guitarist from California who may have hung around with more bands as both musician and musical journalist than any other person. Owner and veteran brewer Skip DuVall loves music so much that bartender Phil may have been hired by wearing a Grateful Dead shirt and just ask Skip about the concerts he attends when you stop in. Skip plans for Chilly Water to be a relaxed local venue that includes occasional live music. cost for this first round is $20 at the door). 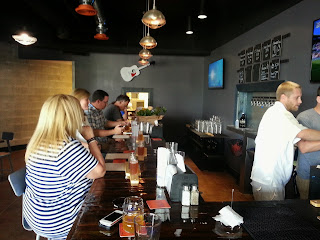 The beer: If I was forced to pick the beers I’d have on my next visit I’d pick the Built to Last Pilsner (5%) or the Sweet Revenge Pale (6.6%), but maybe on a nice summers day it would be… any of them. Seriously, we thought all were very good. The gal from Dallas gave an ultimate compliment without realizing it by saying the pale reminded her a lot of Sierra Nevada Pale; I agree; gold standard reached! Of course, it is a little different to show head brewer Dan Krzywicki’s take on the style. A nice hop spice with malt balance. The Built to Last Pilsner is owner Skip DuVall’s flagship from previous brewing experience but executed very well by Krzywicki. This pilsner fits between an American & German style as clean and crisp without the sweetness of any corn or rice and with just a very slight bitterness in the finish. The Harmonica Hefeweizen is a sessionable 4.8% alcohol delivering a citrus flavor with hints of clove; very refreshing for summer. The 5 String ESB (5.5%) is a delicious dark offering, maybe a little toasty for the style but sure to please a lot of palates looking for that dark grain flavor. On the hoppy end is a nice Space Circus IPA with, if memory serves me, Chinook, Cascade, and Columbus hops. Nicely balanced. This is a line up where we each got a sampler and each finished all of them gladly. Samplers are $7 for 4 4 oz. pours and pints are $5.25. Growler fills are $10, with the growler itself $4. Dan was brewing with Skip previously and now has about 3 years of brewing experience.

On the food side we tried the Ring of Fire panini sandwich with sliced salami, tasso ham, capicola, provolone, and pepperoncini (I had them hold the adobo aoli as I am not much of a fan). Terrific crunch of the fine bread, a river of flavor from the combination of meat and cheese with the final spice of the pepperoncini pepper. One was fine for two of us to share and every bite was truly enjoyed. Though the beer was terrific I’d consider going just for the food! The panini can come with home style kettle chips done just the way I like. Also on the menu are a cheese sandwich that almost lured me, a gourmet cuban, a chicken all dressed up with mozzarella, feta, and sun dried tomatoes, a cheese steak with provolone, some hummus, and a delight that I did not have the room or the guts to try called Skip’s Balls – apparently a dessert concoction as ‘flavor of the day.’ 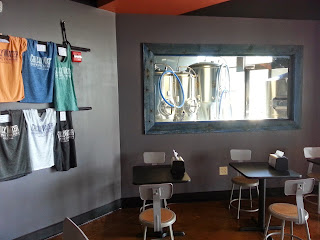 It was a pleasure to see veteran Anna (formerly at Rock Bottom) serving as well as Phil behind the bar, known at a couple of local watering holes. Friendly staff willing to make suggestions and who know their beer and food!

As I mentioned in my earlier blog (found here) Chilly Water will be an easy walk or bike ride from anywhere near downtown and has about 50 seats inside and some outside tables.

For those into the specifics, the brewing system is 7 bbls. with 1 15 bbl. & 3 7 bbl. fermentors leading to plenty of beer flowing. They are serving out of 7 bbl. serving tanks and have capacity to run up to 8 beers on tap — expect five to six regularly. The next beer up will be a MILD (think English mild), a sessionable, lighter alcohol but flavorful beer!

Find Chilly Water near Fountain Square in the Holy Cross/Fletcher Place area, just a ten minute walk from downtown. Bike parking available. Cars must park on the street, which has not been a problem even when we visited just as the rush calmed on Friday lunch hour.