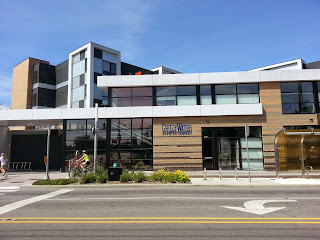 Chilly Water Brewing is the brainchild of veteran professional brewer Skip Duvall. It opens today (Friday, July 27) at 11:00AM, at 719 Virginia Avenue, about half-way between downtown and the heart of Fountain Square in what is officially the Holy Rosary Neighborhood but also identified as Fletcher Place by Indy Downtown, Inc. This is a great walk to or from a many places with a bike path and wide walk in front. The starting lineup of beers will be Built to Last Pilsner, Sweet Revenge Pale Ale, 5 String Hafe, Harmonica ESB, and Space Circus IPA.
This brewery has been months (and more) in the planning for Skip. Skip has experience from the old Alcatraz Brewing Company, one of the very early downtown Indy brewpubs. Skip took over for Omar Castrellon as Omar helped found Thr3e Wise Men (Omar this year returned to Little Rock after many years in Indy). Skip then moved to Fountain Square Brewing and eventually dreamed of his own place. The dream becomes a reality today with upscale panini sandwiches MENU HERE and five beers for now. I plan to be on hand today and plan to update on the beer and the food soon!

SUN KING’s big SOLD OUT Fourth Anniversary party (which we have written about several times) is this Saturday afternoon and night with headliner entertainment, food trucks, and, um, beer. While popular Grapefruit Jungle will be available in pints and cans at the event, there are no growler sales until next week when it is released on Monday to bars and restaurants. For those with tickets, lawn chairs are allowed, and the event is rain or shine.

Sun King’s TASTING ROOM is only open Noon – 3PM this Saturday (no loitering acceptable) due to their Anniversary Party! If you’ve not tasted Laverne and Shirley (I just love those names) these are best-friend beers brewed the same except different yeasts: Laverne is spicy as a Belgian blonde and Shirley is a crisp American lager. Great summer session beer at 4.1 & 4.6% respectively. Both in the tasting room and on tap at the party.

Other beer news: we don’t often catch personal news, but Scott Ellis, brewer at the RAM just had a baby! I think that is worthy of a MUG at the RAM.

Scarlet Lane Brewing is already on tap at nearly FIFTY bars and restaurants around Indianapolis, and has a Tap Take Overs on Wednesday, July 2, at Fat Dan’s Chicago Style Deli in Broad Ripple, and Friday July 11, 4:30PM – 10:30PM, at DC’s Pub, 6537 Whitestown Parkway, Zionsville, IN.

A NEW beer festival has been announced by Daredevil Brewing, co-hosts. Hops & Flip Flops Festival will be held at the Dallara IndyCar Headquarters at 1201 E. Main Street, Speedway, where over 20 local, regional, and national breweries will provide samples of beer along with street vendors, music, food, and more from 5:30-10:00 PM. Proceeds benefit the Speedway Lions Club. Breweries such as Founders, Jolly Pumpkin, Against the Grain, Country Boy, Bells, Flat 12, Boulevard, Stone, Rheingeist, Oskar Blues, Triton, and, of course, Daredevil, are expected to bring some prized highly hopped plus not-so-hoppy beers to share! Special food, wine, and chocolate pairings are being considered! Tickets on sale July 2, HERE

And of course, the 19th Indiana Micro-Brewer’s Festival is coming up on July 19 in Broad Ripple.