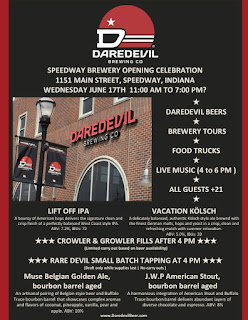 Daredevil Brewery opens their Speedway facility along with taproom and patio on Wednesday, June 17, with an official ceremony at 11, and special tappings at 4:00. As one of the fast growing craft breweries in Indiana the new facility gives them opportunity for continuous expansion and a new facility in Marion County for the public to appreciate their beers. One of the owners, Shane Pearson, told us, “Our goal was to create Indy’s #1 destination brewery. The new location is much easier to access for our wholesale distribution business and we have worked very hard to create a welcoming taproom and patio experience which is only a few minutes from downtown while being easily reachable from anywhere in the metro area by car, public transit and a future trail and bike path that will be adjacent to our property.” Shane adds, “For craft beer fans the results are that we can increase the availability of our flagship Lift Off IPA on draft and in cans as well as provide additional beers in our lineup in cans starting later this year.” We are assured this will bring increased availability of Daredevil Muse, a Belgian style beer, which will be available in cans. The 4:00 special line up includes bourbon-barrel aged Muse as well as bourbon barrel aged JWP stout. We have had both a year ago and are delighted to see them back!

Daredevil Lift-Off is their flagship IPA while Vacation Kolsch is a summer seasonal. Both will be on tap from the opening. On Wednesday brewery tours will be offered, along with live music from 4-6 PM with food trucks on premises. As a brewery this is a 21+ venue. Daredevil is treating this as a “soft opening” and has announced a 4th of July celebration on… well, you know. They also have a Grand Opening Extravaganza planned for July 17, one month later. Of course, Daredevil beers can be found on tap throughout much of Indiana. After June 17 normal hours will be:
Wednesday to Saturday: 3 to 8 pm
Sunday to Tuesday: Closed 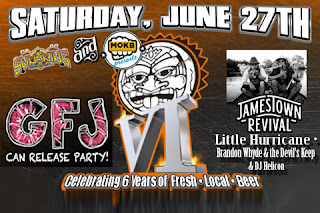 Sun King, the second largest brewery in Indiana, celebrates its 6th anniversary with a spectacular party at their College Avenue and Market Street Location in Indianapolis featuring live entertainment, the annual release of Grapefruit Jungle citrus IPA and a line-up or limited release beers on tap as well as food trucks. Three bands play: Jamestown Revival (Austin, TX), Little Hurricane (San Diego, CA), + Brandon Whyde and the Devil’s Keep (Beech Grove, IN), along with a DJ on location to keep music flowing. Tix are $15 now, $20 the day of the party. Party is 4-10PM. “GFJ was designed as a tribute to the birth of rock and roll and features three distinct hops to mirror the three notes necessary to make a chord, which also happens to create an intense depth of flavor.” says Sun King Brewer/Owner Dave Colt who also told us, “Since we opened Sun King I’ve not worked a day in my life.” We’ve been hanging around with Dave and Clay Robinson who also started Sun King and both of these guys certainly have proved they know how to brew as well as how to throw a great party!

Ride free to AND from the Sun King VI Party with Uber! Download the app and use code SUNKINGVI for two free first rides up to $15 each. • Sign up to win rad audio stuff from Klipsch.

Sun King has experienced phenomenal growth throughout central Indiana and has expanded to distribute to other parts of Indiana. Until the recent change in Indiana law allowing production for sales above 30,000 bbls, Sun King was concerned about being able to continue to serve an expanding customer base. With the new law, Sun King plans to open a Fishers Taproom about July 1 and eventually will build a larger production facility north of Indianapolis. Sun King has brewed well over 150 different beers in the six years since they opened with Sunlight Cream Ale, Wee Mac Scotch Ale, and Osiris Pale being their flagship beers.

IndianaBeer Founder Bob Ostrander has a new book about to be released. More info here CLICK FOR INFO