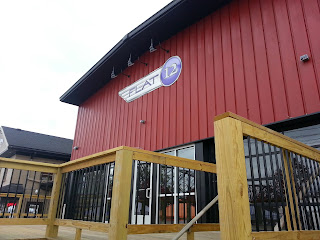 Flat 12 brewery of Indianapolis held a ‘soft opening’ in Jeffersonville in Nov. and a Grand Opening event Dec. 6, and is already in full-swing within the Kentuckiana beer scene. Founding Partner Rob Caputo had told us as the Jeffersonville location was in planning stages that the riverfront operation across from Louisville would not always carry the same line-up as the Indianapolis Dorman Street tap room but would adjust to the local clientele of Kentuckiana, as the 2-state area is often called.

At the grand opening we were delighted with the fantastic selection of beers. Not only were the usual Flat 12 pours on tap (Pogue’s Run, Half Cycle, Walkabout, Amber, and more) but there were so many special tappings like PINKO RIS, Whiskey Jack bbl-aged pumpkin, Snow Dog Canadian bbl-aged rye stout, Kattenstoet Belg pale, with long list. Rob had a special line up in kegs of bourbon barrel, rum barrel, and other exotic beers for those celebrating the opening along with music, a food truck, and just plain fun. Many of these beers have stayed on tap and they recently added Winter Cycle DIPA + Juniper, and Atomik Pulp Amer. IPA with grapefruit zest.

In fact there is a tap takeover of Flat 12 January 27, 4-8, celebrating the upcoming Tailspin Ale Fest at BoomBozz, 1448 Bardstown Rd., Louisville, KY.

Expect not only a special line-up of beers at this riverfront location, as well as some food, outside seating when warmer, and occasional music! 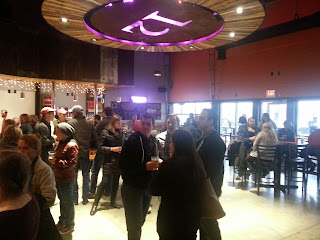 Flat 12 will be a featured brewery at the Tailspin Ale Fest, Feb. 20 & 21 in Louisville, (check our blogs for more information)!