Flat12 may be the first Indiana brewery to have two tap rooms in two major metro areas when they open in Jeffersonville, IN, on the Ohio River literally within walking distance of Louisville in early-Summer this year! Co-founder and Director of Brewing Operations Rob Caputo gave us lots of details recently as we learned there will be some exclusive features to this new venture. After launching distribution in Louisville in late January, Flat12 announced they leased a building that provides ample room for a taproom as well as sufficient space for distribution or even brewing operation if warranted at some point in the future. The building is across from the Ohio River bank near the Jeffersonville amphitheater and a short walk from the new Jeffersonville park at the base of the pedestrian bridge linking Jeffersonville with Louisville. We caught up with Rob the day after he had been back down to the building who told us, “my initial vision for this is… we will have the 5 house beers, we will have our seasonal beer available, then there will be a lineup of beer that is exclusively available at that taproom. We may simultaneously tap some beer at the two locations. I don’t know how many taps yet.” Rob also shared that while they have only completed a rough floor plan, they do envision the space to eventually have a small kitchen so food is easily available. Caputo also stressed, “the nice thing is it is just blank inside…” so there is opportunity to design whatever fits best.

Rob was pleased that the City of Jeffersonville has a strong plan for development and is welcoming Flat12 to the area. We will keep you posted on developments and we will plan to be some of the first to enjoy a beer at this location! As long as Rob keeps some crazy, cool beers flowing beer-lovers in several states will be happy. I got to try some of the FlatTuesday Mardi Gras features including Mud Bug which was brewed with crawfish in the boil – giving it a decidedly seafood spicy flavor, without the actual taste of the crawfish, which we understood the brewers got to eat after the brew day! The King Cake porter was a big porter with extra sweetness and hints of the almond. I also found Big Black Dog American Stout with rye on tap at the Tap Room for big bold notes.

Flat12 also just announced a partnership with IndyEleven, the new soccer team in Indianapolis. In between Indy Eleven’s exhibitions against the Tourbeau Soccer Academy (March 15) and Indiana University (April 4), Indiana’s NASL side will take to the road on Saturday, March 22, for a contest against the University of Louisville Cardinals. Whoa, in the long run It could be Indy Flat12 Tap Room vs. Jeff Flat12 Tap Room!

There will be big news from Sun King Brewing this Thursday, March 13 7-11P, coordinated with their Naptown Brown Release Party with the Naptown Roller Girls. Not only will party goers get some of the American brown ale, plus tunes by A DJ Squared and food from a Taste of the Caribbean Food Truck, Sun King will announce the Headlining Act for their big SKB 5 Party this summer. SunKing turns five years old this summer and plans a major party on Saturday, June 28. This week first details for the party will be announced. Those at SKB 5 in June will get the first Grapefruit Jungle 2014. Then on the official 5th anniversary of Sun King on July 1, GFJ will be released in cans and to bars and restaurants as will BigIron Bourbon Barrel aged barley wine.

Sun King currently has Hopquarius, a big double IPA with Mosaic and Azacca hops at 69 ibu and 8.4 abv. With 7 Belgian yeast straina where the hops are prominent and provide a mango, lemon, citrus mix while the yeast tingle your taste buds with a spicy flavor. The Doctor of Style (yes, the Doctor is in!) is another Sun King creation providing banana bed and zest in a spicy Weizenbock at 8% alcohol. Both are in the tap room now and at select establishments. And then there is my friend Timmie, the Russian Imperial Stout with 9.4%, molasses, brown sugar, and dark chocolate. 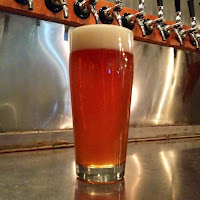 Bloomington Brewing has gone to great length to introduce a new glass at their Lennie’s Brew Pub. A German style “Becher,” German for cup, sends more aroma to you with its curved sides. I found it sleek and stylish and the taste of my Imperial Ruby Bloom Amber that is so tasty on a cool evening.

Upland Brewing announced brand logo and artwork changes are coming soon. Company President Doug Dayhoff says there will be an evolution to the Upland logo as well as to some depth of character to labels. Stay Tuned. Upland also announced Lightwave Belgian Pale is now being tapped with German style Munich malt and Belgian Trappist yeast. Lightwave is a small-batch brew so only available at Upland brewpub and taproom locations in Indiana. Upland released Coast Buster Imperial IPA brewed with Simcoe, Amarillo, Cascade, and Columbus hops and dry hopped twice for aroma in January and it is more widely distributed. Campside Session IPA, a drinkable lower alcohol beer, is also now being widely distributed. And a quick reminder that tickets for Upland Sour + Wild + Funk Fest have gone on sale and if any are available you can find those HERE

Remember that the Bloomington Beer Festival returns April 12, and tickets are available NOW HERE There will be many event locally the week before starting March 4. Check back as we announce events! Rob Caputo of Flat12 stated he feels this is the best festival.

I stopped by Indiana City Beer at 24 East Shelby where I-65 downtown meets Washington Street to learn their fund raiser for the restoration of the historic 1916 Obelisk standing proudly almost in front of the brewery went well and received attention from Indianapolis’ mayor as well as many who donated. While I find their Shadow Boxer oatmeal stout delightful I was also impressed with their Beast of Laurey’s Belgian Golden Strong at nearly 10% alcohol. It has a nice mix of spice with warmth and a pleasant note of malt.

Triton Brewery hosts Girls Pint Out and the Mentoring Women’s Network on March 27th for a social/happy hour. Triton’s Pink Ribbon Saison will be on tap, and there will be a behind-the-scenes tour of the brewery. Mentoring Women’s Network is, “an organization for professional women. Our mission is a community of empowered women supporting one another personally and professionally through mentoring relationships and our vision is the largest and most effective mentoring organization for women in the nation.” (mentoringwomensnetwork.com)
facebook notice HERE