The newest brewery in Indiana is Four Horsemen in South Bend. We visited last weekend for a checkout and to grab a growler for a family reunion.

The door is not memorable but leads to a comfortable bar that can hold probably 40 people. Here they give away samples and sell pints and growlers. Chips and pretzels are available and food can be brought in or ordered from the Dew Drop Inn about a half-mile away. 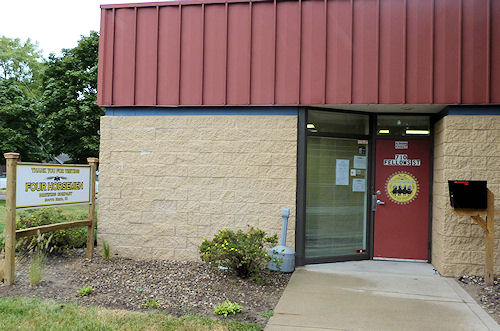 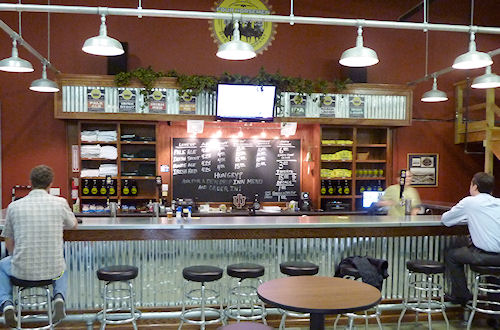 In the back room, visible from the bar, the Mishawaka Brewing equipment from Elkhart has found a home under Stephen Foster’s care. They also have a small SABCO system for test batches and extreme beers. The 4H range is going to get bigger and biggers. 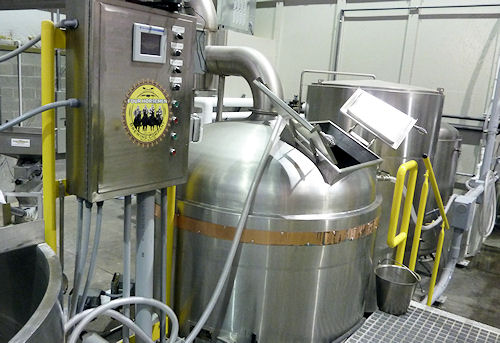 Pale Ale:Brit style with plenty of earthy spice and a touch of noble hop skunk.
Irish Red: Dark. On the sweet side. Lingering diacytl.
Blonde: Nice and bright yet with a cream ale thick mouthfeel. Got 2 growlers of Blonde for the reunion.
12oz bottles have arrived and should be hitting the streets soon.
Ben and Sam Roule’s Great Grandfather, Joseph delivered beer in downtown Chicago in 1919 and a picture of him is proudly displayed. Their Grandfather, Arthur, had a post-war beer distributorship in Michigan City and their father Robert owned Metro Beverages in South Bend. There’s beer in those boys’ blood. From their web site:

“During the early 90’s Sam and Ben Roule (Robert’s sons) started working for the company as teenagers. They both started out sweeping floors, loading trucks, picking orders and delivering beer. Over the years both Sam and Ben worked summers during high school and college. Both graduated from Indiana University. Sam being the oldest was the first son to return to the business to become a full-time sales representative. Ben later graduated from IU and went to work in sales for an Indianapolis based distributor Monarch Beverage for 2 ½ years. After leaving Monarch Beverage Ben returned to Metro in 2003 to soon become Vice President of Sales and Marketing with Sam at that point being Vice President of the company.

In June of 2009 Metro Beverages sold to Indiana Beer. After the sale of the company Robert, Sam and Ben started to discuss the idea of starting a Micro-Brewery here in South Bend. There was one thing missing….. a Master Brewer! To the Roule’s luck their accountant who is a craft beer enthusiast and friend of the family was having a few beers at Lone Peak Brewing Co. in Big Sky, Montana during a ski trip and mentioned their story and idea to the owner and Master Brewer of Lone Peak Brewing Co.. The owner of the brewery told the Roule’s accountant (Paul) that he just recently had a well-qualified Master Brewer apply with him that he was not able to hire. The brewery owner gave the resume to Paul and he passed it on to the Roule’s. Soon after the Roule’s contacted Stephen Foster the Master Brewer and began talks about starting a Micro-Brewery.

Over the next couple months the Roule’s got to know Stephen and about his tremendous pedigree in the brewing world. Oh and when I say world I mean he has traveled the world. He started his career by attending “The Bavarian State Brewery Weihenstephan School of Brewing at Weihenstephan Brewing Company in Germany (the oldest Brewery in the world). Over the following years he spent time working for SABMiller in South Africa, did some distilling for a Rum Company in the Dominican Republic, worked at Nimbus Brewing Company in Arizona and did some consulting work on start-up and existing brew pubs and micro-breweries in the US.

Stephen eventually moved to South Bend and started test batching beers on a small 15 gallon SABCO brewing system in Sam’s pole barn. After test batching for a few months the Roule’s and Stephen soon went full speed into the start-up of Four Horsemen Brewing Company in January of 2011.” 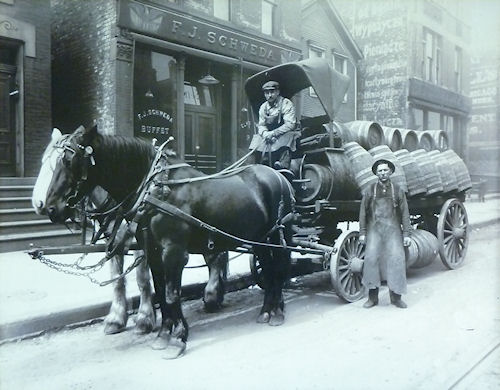 1 thought on “Four Horsemen is open in South Bend”