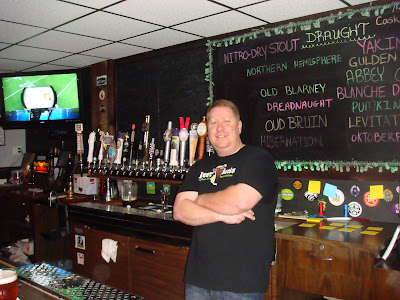 Jason Owens has spent four years trying to open the bar where he wanted to go have a drink.  His efforts have paid off as Beer Geeks has just celebrated its first year in business proving that others in the region also want to go to his bar and have a drink.  Of course striking the craft beer iron while it is hot didn’t hurt either.
Not Your Typical Dive Bar
Well, from appearances, it is exactly your typical dive bar.  Sandwiched between a pizza joint and a burrito place, the unassuming facade of Beer Geeks isn’t inviting the masses from the outside with bright, flashy lights and a wall of picture windows letting you peer at the patrons inside.  There is one iron gated porthole that lets in absolutely the bare minimum of natural light.  At 3pm when the door opens you have to adjust your eyes to take in the darkness, tempered only by the glow of fluorescent.
﻿

“I wanted that dark bar, downtown Chicago feel: low ceilings, dark and intimate.  I wanted a dive bar with a purpose,” Jason explains to me.  “I got some of my ideas from Bone Dry, the booths, tables and chairs.  And I always had the idea for the leather couches.  First thing I did when I got in here was get the carpet.”  The carpet, the exact color escapes me now, only contributes to the dark atmosphere.  In contrast to all of it are the white ceiling tiles that even the whitest guy could jump and hit.

“This is the kind of bar I hung out in Chicago.  I always wanted to open a place where I wanted to go drink.”  And that’s the prevailing theme with Jason.  He fell in love with the Chicago Blues scene and offers Tuesday Bluesday.  Local bands and musicians come play on Saturday nights to add to that intimate bar setting.  It’s everything you might expect to find in downtown Chicago.

“Bone Dry had been rotating craft beers before the movement ever became huge.  It was just something different than your Millers or Buds.  You will never find those here.”

My journey into craft beer started at Beer Geeks with a bottle of Hoppin’ Frog’s BORIS.  As I was chatting with Jason I was slowly sipping on a snifter of Hoppin’ Frog’s DORIS, completing my circle so to speak.  Recently, Wise Guys Liquors advertised a rare beer sale with one of those bottles being DORIS, which I had already had!

That’s a great position to be in.  When you are tapping kegs from all over the states it pays to grab the barrels that might not be available anywhere else in Indiana.  Now I’m sure the folks in Indianapolis get a large selection as well thanks to distributors down south.  But the rotating selection up here separates Beer Geeks from even the breweries that can trade their own beer for another’s.

“Every time you come to Beer Geeks it is like a brand new bar.  Yesterday we had ‘Old Blarney’ but today it’s gone.  I’m about to go put on ‘Zombie Dust.'”

And away he went, back into his labyrinth of kegs and lines and swapped out one for another.  As he was cleaning the line of the ‘Old Blarney’ pouring it into a pitcher he offered a taste of an ‘Old Blarney,’ ‘Zombie Dust’ mix.  I passed but the other patrons at the bar were more than happy to try.

That’s how it has to go here.  There is no set day and time for beer rotation.  If a keg is empty, Jason wastes no tap space and grabs another brew.  It makes Beer Geeks a year round brewfest.

And the clientele certainly helps lend that feel too.  When I was there chatting with Jason there were maybe a dozen people in the place.  Although I was the one pressing him for answers, every patron was waiting to hear the story behind the bar.  At times, the topic changed from Beer Geeks simply to beer.  There is no more enjoyable experience than drinking a great beer and talking about great beer with people who share the passion.

The Palate Requires There Be NO SMOKING

The town of Highland does not have a smoking ordinance.

“So this wasn’t because you were serving craft beer?”

“No, but I know how much that means to craft beer drinkers.”

It certainly is an added benefit to walk into Beer Geeks and not be engulfed in a haze of secondhand smoke.  Most of us know that to truly enjoy a craft beer you have to invoke all five senses and that can be a little difficult when all you smell is nicotine addiction and all you taste is stale air.  But it all goes back to Jason’s concept of the bar he wants to drink in.

This is also a good thing for the beer selection.  It all comes down to his palate.  He alone selects the beer and sometimes, on a rare occasion, he may let a distributor talk him into a beer without actually tasting it.  As far as I can tell, this has backfired only one time.

“One time I got a keg of Pink Killer Beer.  It was grapefruit infused.  Probably the worst beer I’ve had in my life.  I went through the keg in three days.  The girls really loved it.”

“I advertised one time.  I ran a weekly Friday ad for a month in the Times advertising a Blues event.  Oh, and one time I sent stickers or coasters to a brewfest and nobody had any idea the place existed.”

I cheerfully retorted, “But you have about 3,000 friends on Facebook.”

“Yeah, but half of them are from Brazil.  You know how Facebook is, people see ‘beer’ and they just go crazy.  One girl ‘liked’ one of my keg tapping’s yesterday.  I did that in September!  I hope she wasn’t expecting to come in here and order it.”

Jason takes the time to announce every new beer on tap and he’s pretty good about staying up to date.  Between Facebook (Beer Geeks), Twitter http://twitter.com/#!/beergeekspub and his own website, http://www.beergeekspub.com/, you can always stay up to date on what’s going on.

I asked him how much sleep he’s lost in his first year of business.

“I haven’t lost any sleep.  Sure it keeps me busy, between [the three aforementioned media], bar tending, working another job (yes, he works another job), and running the business I certainly have been busy.  But I have a lot of help.”

Beer Geeks, with little to no publicity or fanfare, is slowly becoming a staple in the craft beer scene here in Northwest Indiana.  Although the vast majority of the public may be unaware of its existence, the fans of craft beer flock quite frequently to enjoy a pint, tulip, or snifter of the newest ale to arrive on the scene.  It even manages to attract a few hipsters thanks to the offering of PBR ($3 tall boys only).

When I asked Jason about the future of Beer Geeks he offered me a surprising response: