Evil Czech brewery of Culver, IN, came onto my radar screen based on some excellent beers I have had at several beer festivals. It seems one way to stand out as a brewery today is to be local and to brew a few unusual, high quality beers. Evil Czech does all this not only for little Culver, Indiana, but also for the South Bend/Mishawaka area and is part of a larger restaurant business. Expect to see more Evil Czech soon.

Evil Czech Brewery seems to be founded on the passion and search for flavor and for fresh local ingredients. That passion has resulted in truly unusual and flavorful beers from low abv to peppery spice. Owner George Pesek started his life journey in what was Czechoslovakia, lived multiple times in Europe, lived and increased culinary skills in the U.S. from Napa Valley, to St. Louis, to Chicago as Executive Chef for fine restaurants and now has settled in Northern Indiana to bring fine dining to several establishments accompanied by fine beer with finest ingredients. Currently they own two restaurants in Culver including the Brew Pub and one in Mishawaka Indiana. They plan to add another facility Mishawaka to include brewing capacity. Currently they brew on a 7 barrel system in Culver.

What’s my favorite beer at Evil Czech? Voodo, no wait… Dracula’s Bite, um no maybe White Reaper, um wait…. You see that is the fabulous problem. I mean you figure the Blonde at most brew pubs is there to give the Bud Lite drinker something to try. But the Blonde Czich has a flirty attitude with Sorachi Ace hops and a nice bite (Hey, Evil Czich, bite! think Dracula’esque).

So let’s start a list of my view of the top beers here: and not in any order….

Dracula’s (Hot) Bite: Evil Czech does a great Black IPA called Dracula’s Bite with Warrior hops and a nice almost malty smooth deep dark malt. Imagine adding smoked habaneros to this one. A very sell balanced beer with a nice bite. This is a specialty beer.

Voodoo I love it when ‘session beers’ or lighter alcohol beers carry big flavor. This Vanilla Rye Porter carries, you guessed it, the sweetness of a lot of Madagascar vanilla, the spice of rye, in a light porter that delivers only 4.6% alc. Love it and this is a year round beer.

The White Reaper is…. a white IPA, or a hopped Belgian Strong. Belgian yeast combined with Bravo, Centennial, Cascade, and Citra hops give this beer a huge flavor. The dry hopping of the Simcoe and Citra gives that musky, woody, citrus like plus passion fruit flavors. This is a favorite of a beer bar owner we know.

Okay, let’s go the other way. Let’s consider the sessionable beer that is tough to keep on tap at the brewhouse since it is so popular and provides a lot of flavor with 3.6% alc and 22 ibu. Bobblehead unfiltered American wheat avoids the ‘grainy’ characteristic of some Am Wheats but is smooth and full flavored with a lemon crispness

Or the Gypsy, Chamomile American Wheat at 5% delivering a nice spice of Egyptian Chamomile.

But then there are the breakfast beers: you could start with a 7AM oatmeal milk stout that is a bit sweet with lacto but deep with chocolate and hint of coffee (7.5% alc). Not awake yet? Then cold press Blue Mountain Jamaican coffee to add a nice coffee bitterness for Rasta’s Smokey Esspress Wake up and enjoy the toffee/coffee goodness at only 5.5% alc.

What drew me to this brewery at beer fests was Stalin’s Dark Side (did he have another side?) Russian Imperial Stout released annually on March 5, the date of Stalin’s death (reason to celebrate) aged for 3 months in a nano-distillery bourbon barrel.

And….John the One Eyed Belgian Abbey Ale that undergoes revisions partly because the yeast supplier (one most of us know and love) has actually had some issues with this yeast and Evil Czech was savvy enough to call them on it. But I am still very willing to try each iteration! 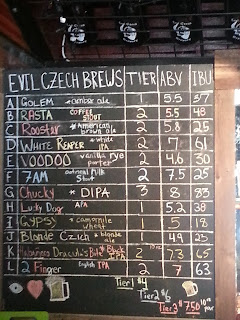 Golem – a nice amber with a nice malt base and some nice toast
Rooster — an American brown with a nice nut flavor
Chucky — a double Imperial IPA (8.55 abv) with mango notes and a hop finish with Polaris hops, Simcoe Citra
Lucky Dog — American Pale with Citra and a Cascade bitterness
2 Fingers English IPA — well balanced with 63 ibu

The good news is that not only will there be an expansion in the South Bend/Mishawaka area in 2014, we expect to see Evil Czech with increased distribution in Central Indiana soon. They’ve already done a few feature tappings at such places as one of my home hang-outs, The Tap Beer Bar Bloomington, and we expect to see more!

Did we mention that they are a farm-to-fork restaurant raising their own bison and other produce so that the Evil Czech awesome tap handles are actual bison horns, a byproduct of the bison meat. 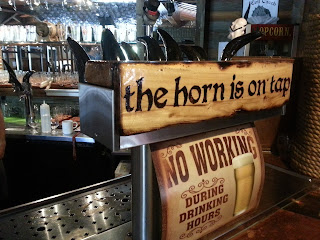 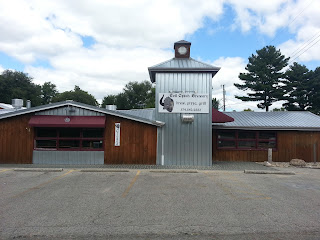 I am glad we ventured to Culver, IN, to visit the brewery but even more glad they are becoming more widely distributed!