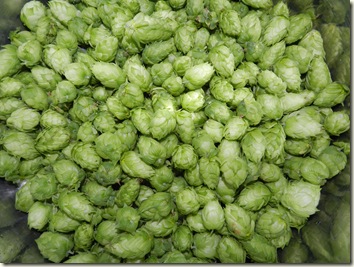 The fall season in craft beer brings us a trio of specialty styles with Oktoberfests, Pumpkin ales, and a growing number of so-called “fresh hop” ales with that year’s harvest making a quick trek from the field directly to the brew kettle. Rather than following the traditional process of drying, processing, and packaging; these hops are often added whole upon arrival while they are still in their “wet” form. Sierra Nevada, the legendary brewery from California that can take credit for launching many a craft beer trend, also claims to have started the fresh hop craze with their first harvest ale in 1996. An increasing number of breweries are now producing these beers, and Indiana homebrewers have had success planting hops at home and creating their own unique examples (my Cascades are pictured at the right). To prepare you for the growing number of these beers hitting Indiana retail shelves, a blind tasting was assembled to try some of the more prominent examples in our market and give you a peek at the liquid behind the label. Beers were procured from Founders, Sierra Nevada, Three Floyds, Two Brothers, and Upland and served in a random order to the tasting panel by our lovely hostess Poppi Rocketts. Joining me on the panel were Andrew Korty, Jason Cook, and Tim Palmer. Here is each beer sampled, along with the brewery’s description and the panel’s tasting comments.   Beer #1: Upland Harvest Ale – Upland’s Harvest Ale is an American Pale Ale by design, but an even more vibrant rendition by loading up our hopback with freshly harvested Citra hops. Expect huge wafts of tropical fruit notes, balanced by a moderate bitterness and light toasted malt character. A showcase for one of our four favorite ingredients and a delight for all the hopheads out there.

Beer #2: Three Floyds Broo Doo – This beer is brewed during the hop harvest with a portion of unkilned or “wet” hops fresh off the vine. Apricot in color, Broo Doo’s nose has dominant orange, pine sap and floral notes, balanced by a glazed nut and toffee malt body. This celebration of the hop harvest has intense tropical fruit, citrus and spicy accents that showcase the complexity of the hops we all love. 7% ABV 80 IBU

Beer #3: Two Brothers Heavy Handed IPA – Heavy Handed IPA is brewed to celebrate the harvesting of the hops every year. Within moments of harvest we add freshly picked "Wet Hops" to this IPA. Since the hops have not been dried before use, they add a wonderful character found in no other beer. A hop lovers dream. 6.7% ABV 65 IBU 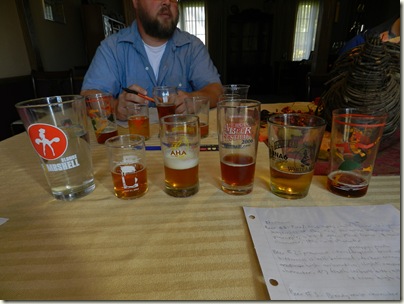 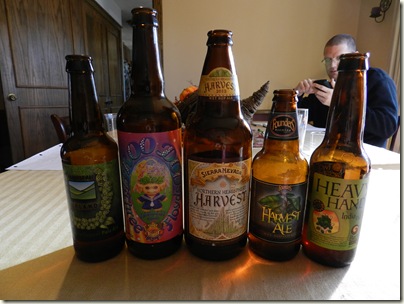 Beer #5: Sierra Nevada Nothern Hemisphere Harvest – The cornerstone of our Harvest series is the beer that started the modern-day fresh hop ale phenomenon in America, our original Harvest Ale. Created in 1996, Harvest Ale features Cascade and Centennial hops from the Yakima Valley in Eastern Washington. These hops are harvested and shipped as “wet” un-dried hops—the same day they are picked—to our brewery in Chico where our brewers eagerly wait to get them into the brew kettle while their oils and resins are still at their peak. 6.7% ABV 60-65 IBU IndianaBeer note: Sierra Nevada also produces a beer called Southern Hemisphere Harvest in the spring that features fresh hops from New Zealand.

After tasting and discussing each individual beer, we lined up a sample of each to determine a 1-5 ranking of each person’s preference. After tallying up the scores, our collective preferences averaged out to (drum roll please):

All of these examples were solid beers that exhibited a bit more diversity than we initially expected. The Three Floyds and Founders samples were the best examples of the hop showcase you typically expect from these beers and made at least the top three on each of our individual lists. Does that mean these are the beers we recommend? That might depend on what you prioritize when choosing a beer as these were also the most expensive beers we sampled (not to mention quite possibly the more difficult examples to find). In our shopping, Three Floyds Broo Doo ran $9.99 for a 22-ounce bomber and Founders Harvest Ale was nearly $7 for the two 12-ounce bottles we were able to score from the local liquor store rationing. On the other hand, an argument could be made that Two Brothers Heavy Handed IPA at $11.99/six-pack and Upland Harvest Ale at $10.99/six-pack represented better overall values. Our results would not make a strong recommendation for Sierra Nevada Northern Hemisphere Harvest as it was neither highly-rated or the cheapest at $6 for a 24-ounce bottle. But Sierra Nevada could very well be the best option for those who enjoy hoppy West Coast Red Ales like North Coast Red Seal (and it was Poppi’s favorite of the group, which is the vote that really matters). Cheers, Nathan 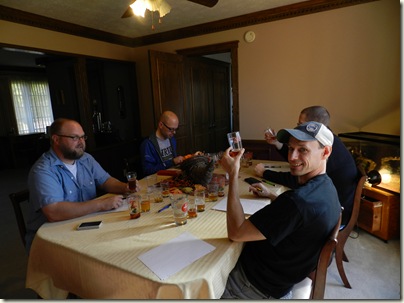