Annually since 2008 Upland has run a Spring homebrew competition called UpCup. Each year the winner’s beer becomes a pro-am brew for Upland and is eventually served on tap at the Upland tap rooms. Congratulations to the 2013 winner, Tom Wallbank of Indianapolis (Zionsville) and member of the Foam Blowers of Indiana homebrew club for his winning Berliner weisse. Tom won in 2009 with a German style rauch (smoked) beer so this year’s German style entry will challenge the tasted buds of local drinkers to enjoy a slightly sour wheat beer. Ron Smith, also of FBI and Indianapolis (Zionsville) came in second this year with a saison. 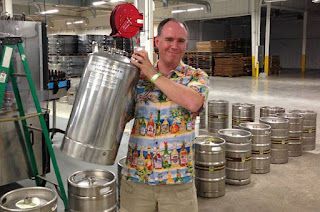 tis the season for wheat beers and they will abound. Flat12 just tapped their Axis hefe on Friday of this past week.

Remember Brew Bracket coming up next weekend at the Indiana State Fairground and your chance to win tickets. check it out here

And just across the state line I Cincinnati, Rhinegeist brewing with former Indianapolis resident Jim Matt as Brewer completed their first batch of beer (officially) this week.