Originally introduced as a celebration for the marriage of Crown Prince Ludwig and Princess Therese in 1810, the Oktoberfest celebration in Germany traditionally starts the third weekend in September and ends the first Sunday of October. While the festival has evolved to feature modern diversions like amusement rides, Oktoberfest is still all about the beer; featuring a maltier version of German lager that is stronger (by German standards) at about 5.8% to 6.3% alcohol by volume. As a culture that’s always looking for an excuse to party (come on now, do you even know what you’re celebrating on Cinco de Mayo?), Oktoberfest celebrations have gained popularity in America with some local large festivals and enough neighborhood celebrations to make that purchase of Lederhosen or a Dirndl worth the money. 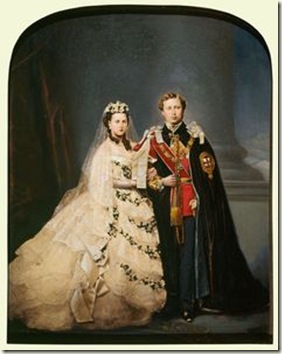 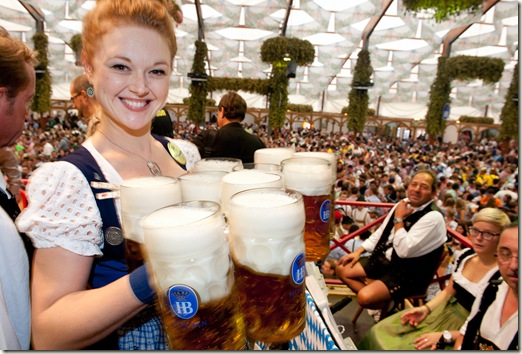 To help you prepare for your own Oktoberfest celebration, we conducted a blind tasting of five commercial examples available in the Indiana market. Our past tastings have focused on styles that American brewers can be credited with inventing or taking in new directions. But an Oktoberfest tasting demands the inclusion of some German breweries to gauge if American brewers have caught up to their German counterparts. So the field for this tasting tapped German beers from Ayinger and Paulaner to go with American OFests from Left Hand, Sun King, and Upland. The beers were served in a random order to our tasting panel, and the identity of each was not revealed until after the panelists had submitted their individual rankings. Joining me on the panel for this session were Lafayette reporter Jason Cook and guest panelists Steven Banach and Amanda Civis. Here is a summary of each beer sampled, with the brewery’s description followed by the panel’s tasting comments. Beer #1: Left Hand Oktoberfest – This is no festivus for the restuvus – on the contrary – we start brewing in the Spring and it takes a full two months to reach lagered perfection. Biscuity, malty goodness dominates upfront while the noble pedigree hops lend a properly spicy, dry finish. Zicke zacke, zicke zacke, hoi, hoi, hoi. 24 IBU 6.6% ABV 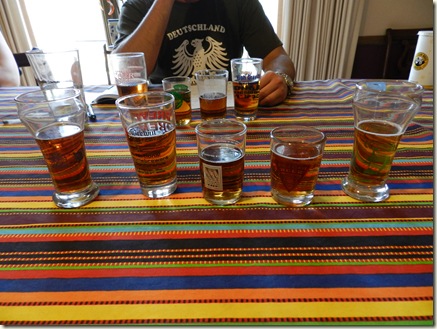 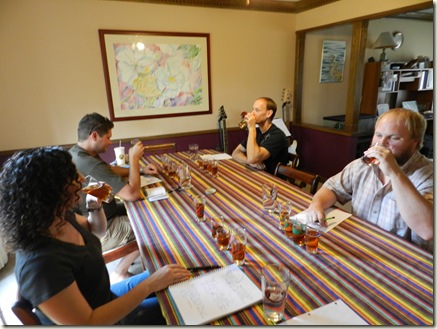 Beer #3: Paulaner Oktoberfest Bier – This beer is an institution: the Oktoberfest Bier® from Paulaner, with its full-bodied, pleasant taste definitely pairs beautifully with the hearty delicacies along with Hendln or Schweinshaxen. Its alcohol content of 6 % volume makes it somewhat stronger than the usual lager beer. With a hint of malty sweetness the Oktoberfest Beer possesses the perfect balance. 6% ABV

Beer #5: Upland Oktoberfest – Our Oktoberfest is a traditional Bavarian lager featuring all-German malts and rare German hops. This dedication to authenticity produces a beer that would be as at home in Munich as it is here in the Midwest United States. The aroma is authentic, the taste sweet and malty, and the finish crisp and hoppy; perfect for a beautiful fall day! 16.5 IBU 6.5% ABV

And the results are in……. Unlike a few of our past tastings, a pretty clear pecking order began to take shape based on the ranking from our individual panelists. To determine the overall results, we used a model where the lowest number of points would win (a 1st place vote = 1 point, a 2nd place vote = 2 points, etc). After tallying up the scores, our collective rankings determined the final order: 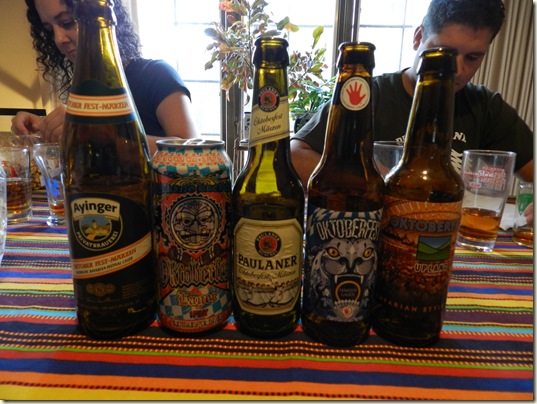 While we could generally say the Germans schooled their American counterparts in our results, credit Sun King for delivering a pretty authentic version that scored consistently high with our panel. But Ayinger was our clear winner with three 1st place votes, which is consistent with high rankings on sites like Beer Advocate and Rate Beer. The reviews ended up a bit more mixed on Paulaner, and seemed highly influenced by how much an individual enjoys more pronounced noble hop flavor. Left Hand and Upland seemed to take different recipe approaches with Upland staying close to a traditional flavor profile; while Left Hand was going for a bigger, slightly “Americanized” version similar to a few other local examples I’ve tried recently. When evaluating cost, our rankings suggest you get what you pay for as Ayinger and Sun King were the most expensive per ounce. Ayinger is only offered in single 500ml (16.9 ounce) bottles. At around $4 a bottle, that’s great when you’d like to try just one, and not so great when you’re trying to stock up for a party. Sun King was close behind at about $13 for a 4-pack of 16 ounce cans. I might personally make an argument for Paulaner as the value pick here at $11 for a 6-pack, but Amanda and Jason would probably disagree based on their rankings. Overall, I think it’s safe to say we recommend giving the Ayinger a try, especially if you’re in the market for just a few bottles. Big thanks to Amanda, Jason, and Steven for serving on the panel and a bigger thanks to you for reading this far. Enjoy a few Oktoberfests at home and/or hit up an upcoming event like Upland Oktoberfest, Herron-Morton Place Oktoberfest, or Brew Bracket Oktoberfest on the 28th. Prosit! – Nathan BREW BRACKET OKTOBERFEST TICKET GIVEAWAY: We are giving away two passes to the upcoming Brew Bracket Oktoberfest on September 28th from 6-9pm at Tomlinson Tap Room in City Market! To enter, leave a comment on this post letting us know what you think of our panel’s rankings, or just leave a comment to brag about your personal favorite Oktoberfest. We’ll do a random drawing of everyone who enters, so feel free to offer dissenting opinions. Comments must be received by Monday, September 23rd to be eligible. And remember, if you don’t win, tickets are available here for only $35 to what should be a fantastic event.