According to legend, the origins of Russian Imperial Stout can be traced to when Peter the Great opened Czarist Russia to the West. A trip to England exposed Peter to the Porters that were very popular in the early 18th century. When the Imperial court of Russia requested Porter to be sent over from England; the low alcohol, lightly-hopped brew spoiled during the journey. Because alcohol and hops act as preservatives in beer, English brewers increased these qualities in a new version of porter that could survive the journey, and the style we know as Imperial Stout was born. The John Courage Brewery used the term “Imperial Stout” on the label of their beer, boasting that it’s creation was by Imperial order of Catherine the Great. 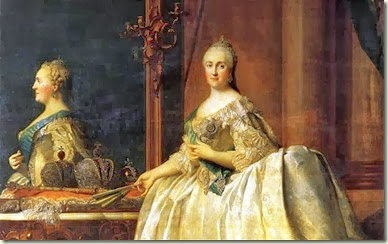 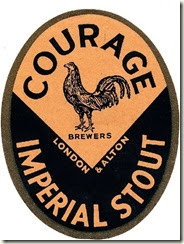 Today’s Russian Imperial Stout has been embraced by American craft brewers to be even bigger and more flavorful. They typically clock in with an alcohol by volume content of 9% to as high as 15%+, and contain an intense blend of various dark malts. As the winter months close in on the Hoosier state, now is a great time to acquire some thick and rich Russian Imperial Stouts to help you make it through some chilly nights ahead. The high alcohol and specialty malts also make these beers ideal for aging, where the flavors can mature and sometimes develop a vinous quality. To make the comparison in this tasting as fair as possible, all beers included were 2013 vintages. Keep in mind that a comparison of the same beers after aging for 3, 5, or even 10 years could yield different results. We didn’t mess around with the lineup for this tasting – each of these beers rate at least a 92 on Beer Advocate and come from highly respected breweries Bell’s, North Coast, Oskar Blues, Sierra Nevada, and Three Floyds. With this lineup of heavy hitters, a blind tasting was administered by our lovely hostess Poppi Rocketts (watch for the coveted Poppi’s pick in the results below). The beers were served in a random order to our tasting panel, and the identity of each was not revealed until after the panelists had finalized their individual rankings. Joining me on the panel were IndianaBeer reporters Dave Allen and Jason Wilkerson and guest reviewer Tim Palmer. Here is a summary of each beer sampled, with the brewery’s description followed by the panel’s tasting comments. Beer #1: Sierra Nevada Narwhal – Narwhal Imperial Stout is inspired by the mysterious creature that thrives in the deepest fathoms of the frigid Arctic Ocean. Featuring incredible depth of malt flavor, rich with notes of espresso, baker’s cocoa, roasted grain and a light hint of smoke, Narwhal is a massive malt-forward monster. Aggressive but refined with a velvety smooth body and decadent finish, Narwhal will age in the bottle for years to come. 60 IBU 10.2% ABV

Beer #2: North Coast Old Rasputin – Produced in the tradition of 18th Century English brewers who supplied the court of Russia’s Catherine the Great, Old Rasputin seems to develop a cult following wherever it goes. It’s a rich, intense brew with big complex flavors and a warming finish. 75 IBU 9% ABV 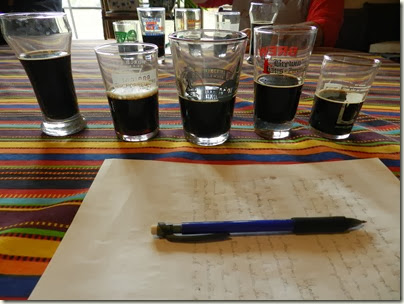 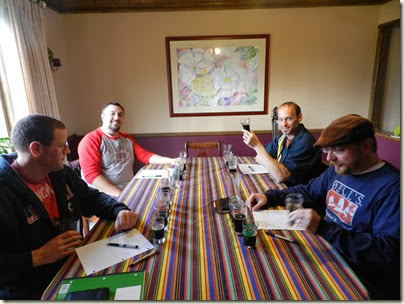 Beer #4: Oskar Blues Ten Fidy – This titanic, immensely viscous stout is loaded with inimitable flavors of chocolate-covered caramel and coffee and hides a hefty 98 IBUs underneath the smooth blanket of malt.  Ten FIDY is made with enormous amounts of two-row malt, chocolate malt, roasted barley, flaked oats and hops. Ten FIDY is the ultimate celebration of dark malts and boundary-stretching beer. 98 IBU 10.5% ABV

Beer #5: Bell’s Expedition Stout – One of the earliest examples of the Russian Imperial Stout in the United States, Expedition Stout offers immensely complex flavors crafted specifically with vintage aging in mind, as its profile will continue to mature and develop over the years. A huge malt body is matched to a heady blend of chocolate, dark fruits, and other aromas. Intensely bitter in its early months, the flavors will slowly meld and grow in depth as the beer ages. 10.5% ABV

And while it doesn’t count in the official rankings, our hostess “reveals” her favorite…… Poppi’s Pick: Bell’s Expedition Stout 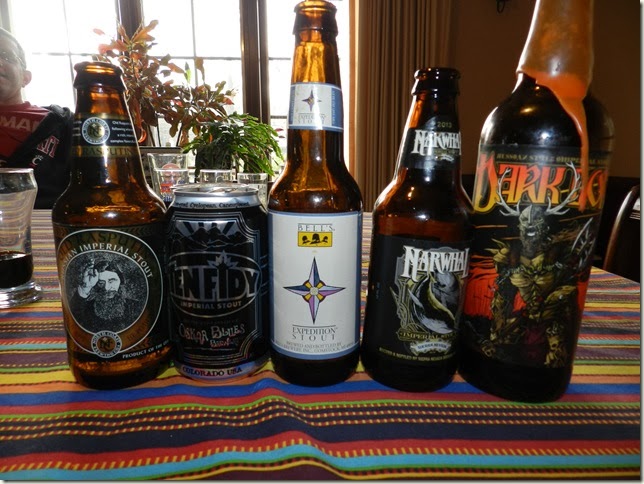 There are two big stories that came out of this tasting for me. First is the rediscovery of a wonderful beer in North Coast’s Old Rasputin. There was a stage in my craft beer drinking evolution where Old Rasputin was a beer I commonly sought out, and an Old Rasputin sign proudly hangs next to the pool table in our basement. But as the number of craft beer options has exploded, it’s very easy to get caught up in constantly trying new things and taking some of these old favorites for granted. I can’t remember the last time I purchased this beer off the shelf, but it certainly won’t take that long again. Along with the straight tasting results we always try to include cost analysis at the end of these because the highest ranking beers are often the most expensive. But at the relatively low price (for a Russian Imperial Stout anyway) of $10.99 for a 4-pack, this aspect only bolsters the case for Old Rasputin in this lineup. But I suppose the real elephant in the room here is the performance of Dark Lord. It wasn’t the poorest performance of any beer we’ve had in these tastings (the dubious distinction for that belongs to Brooklyn Brown Ale), but it was definitely the most surprising. Reaction to the result may be summed up best in a note from Jason: I was able to call out Beer #3 as Dark Lord as soon as I smelled it and it was only confirmed by the taste. It is amazing that a beer that I truly enjoy, when placed side by side with beers of the same category it could pale in comparison. The mystique of Dark Lord certainly draws its following, but in a "blind" tasting the simple fact that it could be labeled worst amazed me. Of course, in a pairing of five someone has to be a loser, but that beer? Shocked and amazed. Just proves that there are a lot of great beers in this world to enjoy. Even with the consistently low rankings, opinions from the panelists about Dark Lord still varied somewhat. Jason and I noted certain qualities that impressed us, while Dave flat out wouldn’t finish his sample. But this ranking clearly came down to a consistent feeling among the panel that the high level of residual sweetness in Dark Lord hurt the drinkability and distracted from the positive qualities. Personally, I had tagged this beer as probably 3rd or 4th in the initial round where we taste them individually. But when compared side by side in a final lineup of this caliber, any notable flaw really stands out. And there’s no getting around it – when considering this beer as a value for your dollar, Dark Lord was a huge disappointment. But I’m not sure that’s even a controversial statement for people who really like this beer. You’re always paying a certain premium for the mystique and a memento of your experience at Dark Lord Day. We shouldn’t forget about the rest of the lineup – Oskar Blues Ten Fidy and Bell’s Expedition Stout are exceptional beers. Bell’s Expedition in particular exhibits the type of character to suggest it could really be outstanding with some extensive aging. But at a slightly elevated price point, it’s still hard to recommend Ten Fidy ($15.99 for a 4-pack) or Expedition ($17.99 for a 6-pack) over Old Rasputin. Sierra Nevada Narwhal is a worthy value consideration at $10.99 for a 4-pack and will likely develop some of the lacking complexity with some aging. But if you’re looking for a great Russian Imperial Stout to enjoy in the near future, we can’t recommend Old Rasputin strongly enough. Buy up a good portion of that beer and horde it for yourself. Save the Dark Lord for impressing your friends with rare beer. Cheers, Nathan