From “meet the brewers” to many special tappings at locations all over Bloomington (IN), THIS is the start of Craft Beer Week in Indiana. The culmination is The Beer Festival on Saturday, April 13, 4:00 admission, 3:00 VIP entry details here.

Highlights of the Week’s Events:

Girls’ Pint Out meets at The Tap Bloomington + fund-raiser in the Back Room for Habitat for Humanity.

Lift-Off & Muse from Daredevil and meet the Daredevil brewers at The Farm Restaurant, Root Cellar bar 6-9

Saturday, 4/13, 4-7 Bloomington Beer Festival Our Man Nathan is with Brewers of Indiana Guild and will have an inside story

After Party: The Tap; SunKing and Flat12 pins

Here are some shots from yesterday’s (April 6) arrival of Upland’s 15th Anniversary beer, Champagne Velvet, recreation of pre-prohibition lager arriving in Terre Haute, IN, for tapping. Terre Haute was home to the brewery that brewed this once well-known label. our story here

Shown are Marilyn Wheeler wearing her Uncle Jim O’Connell’s shirt which he wore distributing the orginal Champagne Velvet, Arrival of the beer in Terre Haute via beer wagon, Upland Owner Doug Dahoff celebrating the arrival, the first pour of CV at The Copper Bar 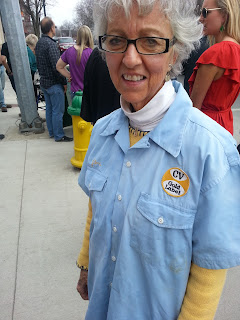 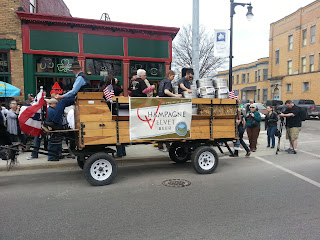 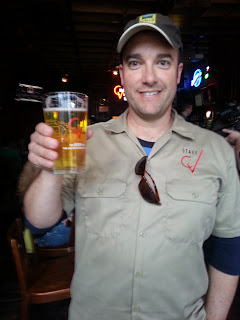 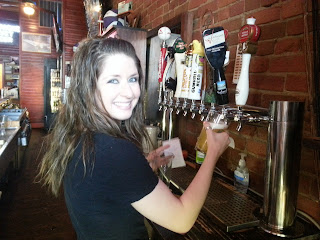 The first step in the repeal of the 18th Amendment was the signing of the Cullen-Harrison Act on March 23, 1933. The law made the sale of low-alcohol beer (below 4% alochol by volume, 3.2% by weight) legal once again and took effect on April 7, 1933. In 2009 a group of beer lovers, with the support of the Brewers Assn., took to social media to drum up support for celebrating a National Beer Day on April 7.