Evil Czech Brewery of Culver, IN, paid a visit and brought a sample of their new Czech Pilsner – to be introduced on New Year’s Eve at the brew pub. As the brewery’s Manager of Sales & Operations, Shawn Erickson, relates to us with a Master Brewer and Owner from the Czech Republic they were not about to release this beer until they felt they have it just right. This is a medium body, complex beer that starts with maltiness with a rounded bitterness and spiciness from Saaz hops. The sample we received tasted very nice!

Evil Czech continues to expand! Later this Spring they will open a new brewery in Mishawaka, IN, which adds to the presence of their Corndance Restaurant in the area which currently serves their beer. They also are expanding with a new MUG CLUB! Click on their restaurant site for details about the mug, growler, discounts, swag, and party(ies) available and the mug club is being offered at a discount with a special party this Saturday afternoon (Dec. 21) Noon – 4 at Corndance Mishawaka.

Planetary Brewing in Greenwood is expanding! The Brewery, located on Polk Place in an industrial park, is adding an expanded tasting room to be open in a couple of months. 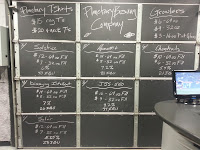 Brewer/Owner Andy was proud to offer six beers for growler fills when we stopped by for his nine-month anniversary. One of those beers is a wonderfully balanced big hoppy and malty beer dedicated to a man we lost last year who was an acquaintance of mine and a life-long friend of Andy’s. The JSS 550 is over 8% abv and 94 ibu but seems smooth and bold. The new tasting room will allow for pint sales and will allow for a lot more brew room. Planetary beer is also on tap at Shallo’s in Greenwood and is slowly and selectively adding taps on the South Side. Andy says they are right on plan as he realizes his dream with this brewery.

Look for beer in cans to explode in 2014. From Tin Man Evansville, to Daredevil Shelbyville, now even Flat12 is adding select products in cans. Cans are portable and can be taken to sporting events and outdoor venues where glass is not allowed. For a brewery the issue is carrying the inventory of printed cans which take much more room than beer labels.

Winter Beers are here as we’ve profiled in a couple of blogs. Bloomington Brewing just released their Winter Ale with Saigon cinnamon, vanilla, orange peel, and chocolate coming in at about 6%, and only 10 IBU. BBC Winter Ale will be available at Lennie’s in Bloomington and at select tap handles in central Indiana.