Columbus will host the D’Vine Winter Wine and Beer Festival this Saturday from 11am – 7pm at The Commons on the second floor of the Nugent-Custer Performance Hall. Upland will be representing the Indiana brewing community. Tickets are $20 in advance and $25 on Saturday. Construction is underway at the new Tin Man Brewing Company in Evansville. They are shooting for an opening this summer, but in the meantime you can follow the progress on their Facebook page. The Heorot Pub is Muncie is poised to become the city’s only brewery. Stan Stephens and Robert Cox have put together a unique brewing system with a wooden frame to go with their Viking theme. Each batch produces just 10-11 gallons (…maybe my patio qualifies as Sahm Park’s first brewery…) so there will plenty of room for experimentation. This article claims it will be Muncie’s first brewery, but the pre-prohibition Muncie Brewing Company might dispute that. The Hoosier Beer Geeks report plans for a collaborative brew involving Sun King and Colorado’s craft beer canning pioneers Oskar Blues. The breweries will be creating an 8% Belgian-style ale called Chaka that will be released in their respective markets. Oskar Blues is not distributed in Indiana, but should you find yourself in a state where it appears on the shelves pick up some Gordon and thank me later. Since it’s 50 degrees outside and you’re already thinking about spring, it’s worth mentioning that Bell’s Oberon will be released on March 26th. Prepare yourself for some overhyped much anticipated release parties coming to a bar near you. We’re looking for judges and stewards for the National Homebrew Competition first round judging at Sun King Brewing in Indianapolis. If you are a BJCP-certified judge or would like to participate in a fun event as a volunteer steward, the online registration site is now open here: http://tinyurl.com/nhcindy2012. There will potentially be four judging sessions:  Friday evening, April 13th @ 7:00, Saturday morning, April 14th @ 10:30, Saturday afternoon, April 14th @ 2:30, and (if necessary) Sunday morning, April 15th @ 10:30 I leave you with a Zymurgy magazine cover featuring swimsuit model Kathy Ireland from 1988 that resurfaced thanks to AHA founder Charlie Papazian. Who says homebrewers are geeks? Cheers, Nathan 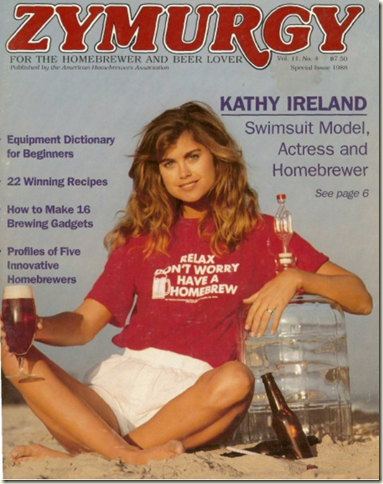