indianabeer.com is having a “meet up and tweet up” at Tomlinson Tap Room in the Indianapolis City Market this coming Wednesday, June 27, 6 PM. Visits from some of our professional brewers, free gifts, and surprrises and a chance to grab a pint of great Indiana beer on tap at the TomTap Room! C’mon down! We’ll also have a few copies of Bob Ostrander’s book “Hoosier Beer…Tapping into Indiana Brewing History” for sale!
Visit FIVE central Indiana breweries on the first Indy Brew Trek bus! On Saturday, July 7, participants will meet at Thr3e WiseMen in Broad Ripple and be transported by bus to Triton brewery, Flat12 brewery, Fountain Square brewery, BlackSwan brewpub, and back to Thr3e WiseMen. All for $25 for the bus ride and most of the breweries will provide a taster or two and your chance to buy a pint or more at each place. Call Jeff at 317-432-8798 to find out Tickets on E-Bay

Triton Brewing is participating in the Lawrence 4th Festival with beer available. http://www.facebook.com/4thFest

Downtown Brew Pubs
Gettin’ downtown to stroll around and find a pint?

RAM downtown has three seasonal beers on tap. The Ghost King IPA is a session IPA and a great Summer beer. Both the wit and the California Common (Steam) beer are very tasty for the Summer. The RIS is complex with appropriate high alcohol. 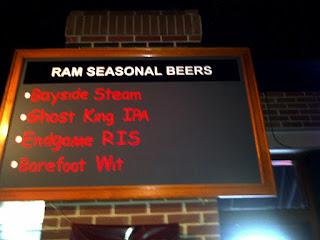 Rock Bottom downtown has a Summer honey blond for the season. There are actually EIGHT beer on tap right now. 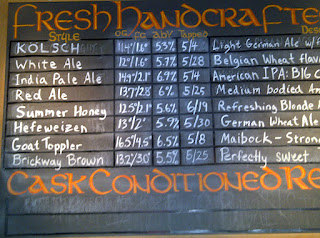 Brewer Jerry of RB was busy getting his entries ready for the Brewer’s Cup competition of the Indiana State Fair when we visited. Credits to Anita Johnson and Tom Stillabower for making this one of the top beer competitions in the U.S.

Just a short distance from Downtown, though not a brew pub,there is plenty of seating room at Fountain Square Brewery. the Summer offering would be their hefeweizen. But they just tapped a nugget IPA that is pretty tasty too. 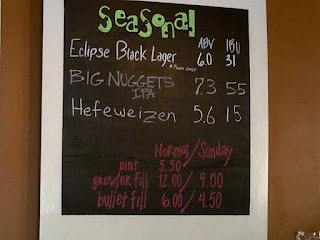 Fountain Square, like most near-town brewers, has free parking.

SunKing — remember, SunKing tap room will be closed starting July 4 until July 18 for renovation but right now they have their regulars plus Seasonals: Bitch’n Camaro and

Again, meet up with us Wednesday! 6 PM TomTap at City Market!