Hope everyone enjoyed their Memorial Day weekend, found a bit of shade, and enjoyed some quality mid-July style beer. I’d like to throw a nomination to Weihenstephaner Hefe Weissbier as a quality choice if you’d like to skip the Corona on a 95 degree afternoon. Leave us a comment below and share your recommendations for beers that can beat the heat this summer. Now we turn our attention to the month of June and a very busy craft beer event schedule. It kicks off this weekend in the eastern corners of our state with the Brew Haven Ticket Release Party up north on Friday and the Fest of Ale down south on Saturday. If you’re looking for something in central Indiana, you can check out the Nickel Plate Arts Weekend events in Hamilton County featuring a special tapping of Nickel Plate Arts Wheat at Barley Island on Saturday. Tickets are now on sale here for the Indiana Microbrewers Festival on July 14th. You can opt for either the 3-7pm general admission at $40 or the 2-7pm VIP at $55. I strongly recommend buying early if you’re interested in the VIP passes. Another entry in the growing collection of summer festivals comes to us from United Package Liquors in Broad Ripple with Indy’s Wine and Brew Fest on June 15th. This festival is not specifically focused on craft beer, but you can scan through the offerings here and surely find something that piques your interest. It’s the ideal outing for the beer drinker whose spouse prefers wine (I know you’re out there). Tickets are $30 or $45 for early entry and can be purchased here or by calling 317-205-1200. Fans of IndyCar racing and craft beer can take heart in learning that local craft purveyors Amsterdam Brewery and Muskoka Brewery have replaced Labatt (owned by Anheuser-Busch InBev) as the official beer sponsor for the Toronto race on July 8th. The deal stipulates that Amsterdam and Muskoka will be the only beers served at the site of the race. Yes, a sporting event where you can’t purchase Bud Light – perhaps the world really is going to end this year. 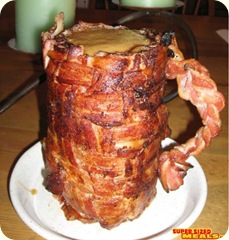 Bacon lovers everywhere are in mourning as Caramel Apple Spiced Ale beats out Dark Chocolate Bacon Porter as the newest gimmick addition for Blue Moon’s fall variety pack. The good news is you can still drink the Caramel Apple Spiced concoction out of this ==> Leinenkugel’s is taking the inventive approach of aging their Big Eddy Imperial IPA at sea in a wooden apple brandy barrel from Great Lakes Distillery. This has some relevance to history as the English developed the practice of intense hopping in the mid-1700s as a means to preserve beer over a long voyage to India. Of course Leinenkugel’s has access to a fine selection of Amarillo, Cascade, Citra, and Simcoe hops. Score one for 21st century brewing. Our oddity of the week may not appeal to those with a weak stomach – you’ve been warned. The story comes from Evil Twin Brewing, where brewmaster Jeppe Jarnit-Bjergso claims to have a beer inspired by the vanilla smell from his newborn son’s diaper. The beer is, in fact, named “Soft Dookie” and is an Imperial Stout with hints of the baby poop inspired vanilla in the aroma. Let’s hope other brewers see the fallacy in making this a trend as Dogfish Head’s Golden Shower didn’t last long and BeerAdvocate reviewers have not been kind to Bluegrass Brewing’s Horse Piss Beer. Just be thankful I dismissed the idea of tracking down a clever photo to pair with this one. Cheers, Nathan