Take your pick of Beer Events this weekend in Indiana!

The first ever SunKing CANvitational includes at least THIRTY ONE breweries, all packaging in cans, on Georgia Street and PanAm Plaze from Noon (early entry $75) or 1-5PM ($50) Saturday, September 27. click here for TIX Such ‘far flung’ brewers as Marble of NM, Sockey of ID, Surly of MN, Tallgrass of KS, and Morgan Street of MO will participate as well as one of my favs, Revolution of Chicago and of course our home-state heros TinMan and SunKing of IN and more. There will be food, music, BEE coffee, and fun.

Within walking distance is the Upland Brewery OKTOBERFEST same day (Sat. Sept. 28) 1-9PM promising all the fun of a Munich beer tent, live music, food trucks, music and tix only $5 click HERE for Upland Oktoberfest TIX at Military Park off of West Street in Indya

Connect with your Irish Roots Well, not exactly a beer fest but beer will be served and there will be hurling – you know, the sport (no not THAT kind, we hope) tonight, Friday, Sept. 27, 7-9PM at Kuntz Park, 1502 W. 16th ST, Indy. Flat12 beer will be served in a beer garden and This is the last night of the season for Indy GAA’s Premiere League, which has grown into a great spectator event through the year. Info at IndyGAA 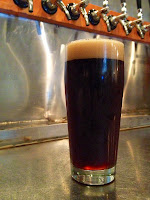 Indiana Collaboration Beer: Black Acre Brewing (Indy) and Bloomington Brewing (uh, B’ton,IN) released a collaboration beer yesterday: an American cousin of a German style Roggenbier with a balanced grain bill using a lot of malt including rye malt, chocolate malt and carafa , a hefe yeast strain and variety of German and American hops. This very malty dark beer starts with just hint of yeast esters, delivers a nice rich dark flavor and finishes with a slight spice of rye. This beer is dark in color, rich in flavor and complex. It does not provide much in hop notes like most American ryes and this does not have the graininess of some. We sampled this one on the day it became avaialble and we will be going back for more. It should be on tap both at Black Acre on East Washington St. in Indy and at Lennie’s in Bloomington – but don’t delay, there are limited quantities.

Meanwhile we’ve been trying all of the pumpkin beers we can get our mouths on. Yes, we know some do not like beer with pumpkin. It only comes once a year and we enjoy! We had a delicious Pumpkin Ale by Bier Brewery (Indianapolis) the other nite and this is right up there among our favorites – a lot of delicious pie spice coming from addition to fermentation and kegs! Cutters Pumpkin Porter is a tasty spin on the traditional. We hope to get our hands on some Flat Jack Pumpkin Ale by Flat12 this weekend and it is on tap at Flat12 Bierwerks.

RateBeer reports that the top five rated pumpkin styles are mostly not out yet but their number 6 is Pumpking by Southern Tier. We had some last week and loved it but want to do a direct comparison with our favorite so far. After chatting with over a dozen patrons and bartenders at multiple craft beer establishments we select Schlafly Pumpkin as the best so far regionally. Schlafly delivers a wonderful balance of spice with malt underpinning. Smashed Pumpkin by Shipyard is an Imperial that also delivers a mouthful of flavor. Again, we felt the Bier and Cutters offerings hold their own against these widely distributed offerings. If you like less spice we suggest the Shipyard PumpkinHead or the Smuttynose Pumplin Ale (both from Maine). While I rarely rip on a great brewery, I’ve sampled the Brooklyn Post Road Pumpkin twice now (small tastes) and thought it lacked flavor. Clearly more research is needed… and I am waiting for the release of several more.

Upland Kiwi, Strawberry, and Blackberry fruied Lambic-style ales will be released in limited quantities via a web site open at NOON on October 1 (an d closing at noon, Oct. 8). Lottery winners will receive notice by email on Oct. 9th. Any remaining sours available after Nov. 5th will be sold on a first-come basis in Indy and Bloomington. We had a chance to taste some of the notes sours with Head Brewer Caleb Staton recently in a project looking at flavor over time. It is quite interesting to note the differences in profile based on a few months difference in age! We had not had the chance until then to try an unfruited Upland sour but for those of us who love Belgian gueuze this was a wonderful experience! Upland Sour Lottery site is HERE

Upland beer will hit taps and shelves in greater Chicago in October starting with Upland Wheat and Upland Dragonfly IPA. Seasonals will be rotated in starting with Upland Infinite Wisdom Tripel and the wet-hopped APA Upland Harvest Ale. Upland President Doug Dayhoff shares, “the tremendous reception of Upland’s recent wholesale expansion into Ohio and Kentucky has created an opportunity for even more growth….We anticipate strong reception as we move into Chicago.” River North, distributors of other national and craft beer, is handling the Illinois expansion.

Daredevil starts canning Daredevil Brewing, Shelbyville, IN, will be making the popular Lift Off IPA available in cans before the end of this year. Lift Off is a well balanced IPA with West-Coast hops and has developed quite a following already in Indiana. Daredevil also has RipCord Double IPA and Seasonals that have included Muse and Carnival, a Belgian Saison now available, as well as a lighter koelsch.