The 18th Annual Microbrewers Festival wrapped up a huge week for Indiana craft beer, beginning with the Indiana Brewers Cup competition, and bridged by a boat load of special beer events during Circle City Beer Week. Our staff suffered through another long day of hanging out with friends and drinking great beer to bring you the following pictures and individual thoughts and beer picks. If you don’t see your favorite listed, give them some love in the comments below. Cheers! 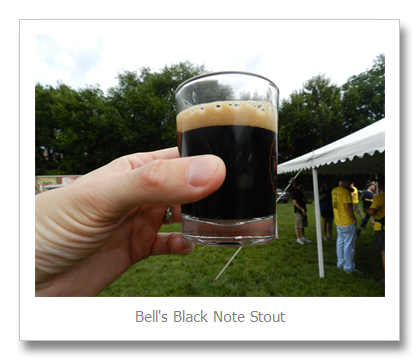 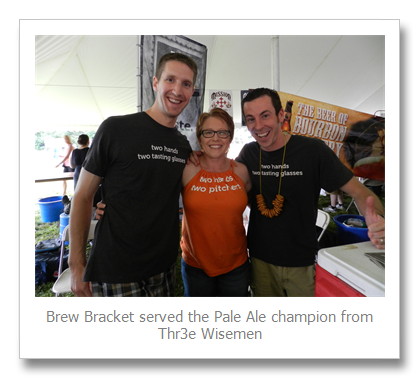 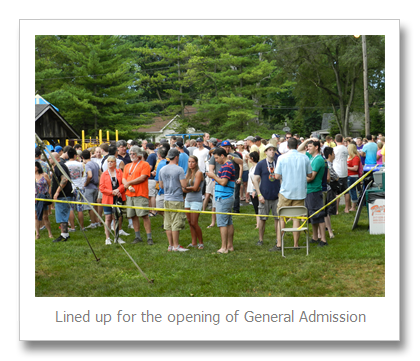 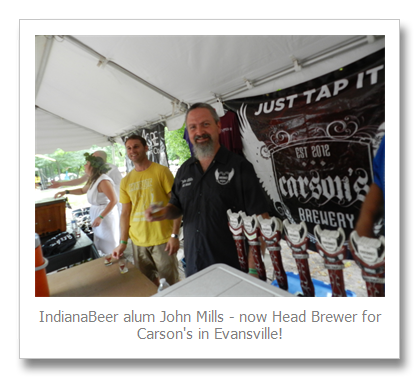 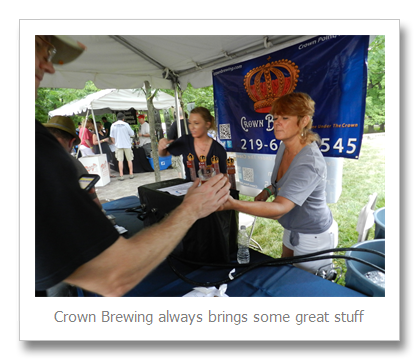 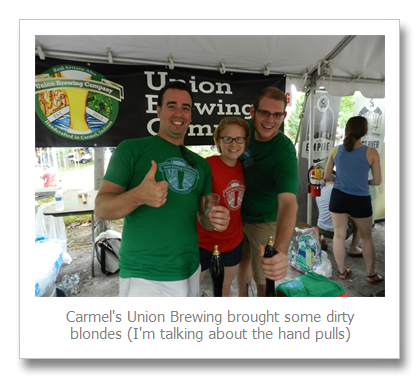 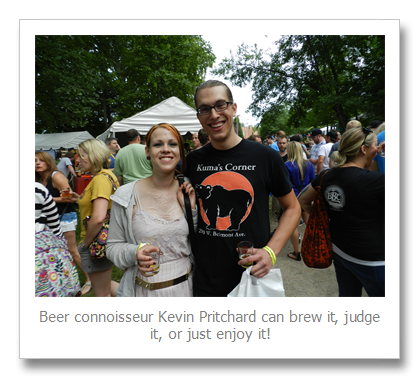 After waking up to a dreary Saturday morning, the Microbrewers Festival ‘13 had better weather than the last couple.  I’ll take some light rain over 95 degrees every year.  This year the Brewers of Indiana Guild started the VIP Experience, and I grabbed one right away.  I had no idea what this was going to consist of, because no one had heard anything about it.  In the build up to the festival I was able to talk to a few people and get a feel for what this VIP tent was going to entail.  The basic idea was pretty good, a tented area to sit down, relax, and get some really rare beer.   An email was sent out explaining that there would be two tapping times for the VIP experience tent and that absolutely no one without the special VIP wristband would be let in. So 2:50 hits and  my phone alarm goes off to let me know to start heading that way.  I got to the tent and the volunteers weren’t quite ready to serve the beer yet.  To help you relax there was an air conditioned bathroom, and some light food pairings and fruit. Sadly I missed out on the food pairings, but the bathroom still had quite a bit of a line most of the time. After a brief wait of 5 or 10 minutes we were let in and got to sample from the first tapping of beers.  The food line grew very large so I headed to the beer line, naturally. With the relatively well available lineup of Brugge’s Peony, Three Floyd’s Dreadnaught, among others I was starting to doubt if the VIP experience was worth it at this point. A few pitchers to pre-pour the beer and some more chairs probably would have been nice, but otherwise the experience ran pretty well.  The five o’clock tasting had quite a few interesting beers.  The offerings included Triton’s Batch #1, Lafayette’s 14 year old Big Boris Barleywine, and a 4 year vertical of Shoreline’s Scotch Ale from ‘07 to ‘10.  All of these were great, however by far the best beer at the festival, and one of the best beers I’ve ever had for that matter, was Pappy Fog.  This batch of Sun King’s World Beer Cup gold medalist Belgian Quadruple was aged in Pappy Van Winkle barrels and it is truly a spectacular beer. I enjoyed the rest of the festival as well, with some entertainment provided by Flat 12’s cosmic bowling themed casks and Black Acre’s togas or maybe they were ghosts.  I missed out on most of Flat 12’s beers, even though I didn’t mean to, but Black Acre’s Coffee Cat was one of my favorite beers all day.  Sun King’s booth was tapping a new specialty beer every thirty minutes, which actually worked out quite well for them and it was great beer too. After the five o’clock beers I would have to say that the VIP experience felt worth the money.  It certainly needs some improvements, but at the end of the day its all about the beer.  Congratulations to Clay, Rob and the rest of the Guild on a great festival and a big thanks to all the volunteers. 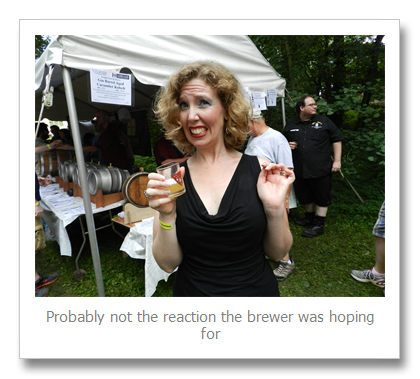 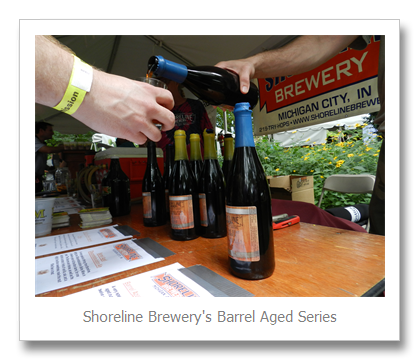 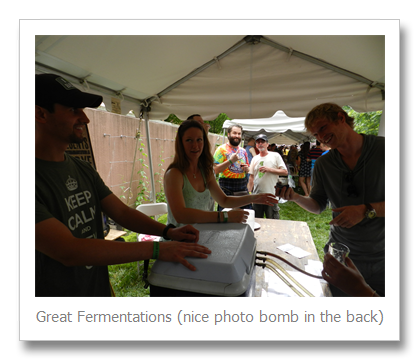 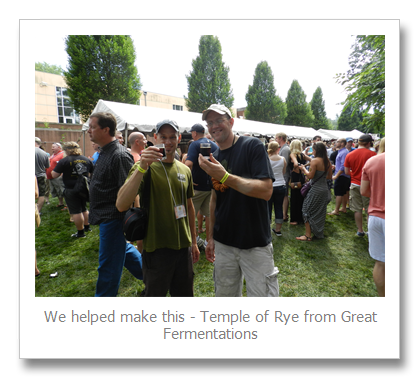 Despite my best efforts to infuse some sort of clever, witty opening commentary summarizing my experience at this year’s Indiana Microbrew Festival, I came to realize that this reflection will most likely end up mirroring my day of beer tasting. Looking back at the day, the breweries I visited, and the beers I sampled, the only word that accurately sums it all up is random. Just about the only conscious decision that I recall making was to hit the Hopapalooza tent upon entering. Beyond that, just about every brewery visited was either the result of following a friend to where they were getting their next sample or just running out of beer and hopping into the closest beer line. Ok, where am I? Victory? I’ll try the Summer Love Blonde. Against the Grain? The Kentucky Ryed Chiquen sounds interesting. The only negative thing about not having an itinerary is realizing that you missed out on a few favorites along the way. Not only that, but one of those favorites, People’s from here in good ol’ Lafayette, had a pretty kick-ass jukebox tapper featuring all of their #1 hits. Personally, I’m big on the Space Cowboy and Amazon Princess but, for this day, my randomness just didn’t find my feet taking me in their direction. I will say this about my beer tasting exploits for this day, there were some damn fine beers for the tasting. I’m no beer judge and I’m not about to start breaking down specific characteristics that made the following list of beers enjoyable. So I’ll just say this and get on with the list; they were very, VERY enjoyable! So, in no specific order (I suppose that makes this….random?) I give you my IMF favorites for 2013.

I really don’t have many other observations for the event this year. Rain stopped just in time and the temperatures were a welcome relief compared to last year. Everything seemed pretty crowded yet it never seemed like too long of a wait for your next tasty offering. Overall, couldn’t have gone much better from my perspective. Well done Brewers Guild, see you again next year. 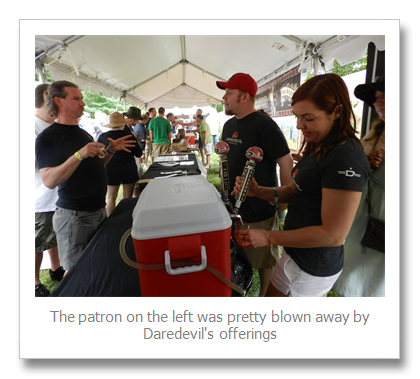 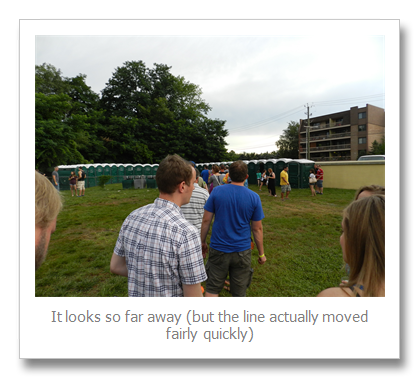 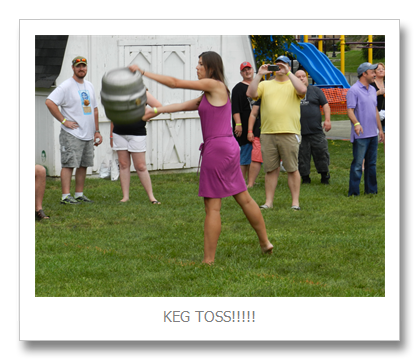 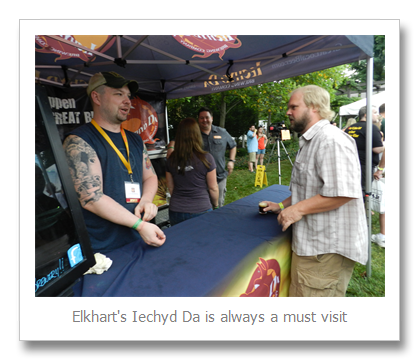 It’s been two years since I last volunteered for the Microbrewers Festival. I’ve helped out at Winterfest and other events, but this festival is one of the biggest festivals put on by the Indiana Brewers Guild. Being a volunteer gives me a different perspective on the festival, it also limits my drinking time. Let’s start with my thoughts on the festival and wrap up with the fun stuff aka the beers I did get to try. Overall, I thought this festival was one of the best ones. Things were more organized, chaos did not ensue.  I’m not sure if the VIP tent was a good new feature or not. None of the volunteers were allowed in and the people I helped checked in who paid the $100 to go to the VIP experience didn’t seem to understand themselves what it was all about. (Which I found interesting considering how much they paid to be there). Lines this year at the booths weren’t extremely long, even with General Admission roaming around, I’m not sure if that was due to not selling out or the brewers were just getting them in and out faster than before. My only two thoughts / issues I had with the festival was first seeing around 5:30, with an hour and half left of the festival, that there were empty booths, or that most of the beer was out from the brewers. It was a mixed feeling to be happy that people loved certain breweries so much that they ran out of beer, but it was also sad that the breweries weren’t more prepared for everyone to enjoy their beer. Secondly, and I know the Microbrewers festival is getting bigger and bigger, but I didn’t like that all of the Indiana breweries were crunched into the Riverfront, the Lawn or the Allee and all of the distributors and out of state breweries had the free reign of the fields. I’d almost like to see if that could be flipped somehow. Or at least give more room to the Indiana Breweries instead of the out of state breweries. Now.. Onto the Beer! I didn’t get to try everything I wanted. (I’m looking at you – Zwanzigz – with your Imperial Stout infused with Ghost Peppers), but I did get to a few ones and some that weren’t on my list that I tried were great. These are my highlights – Great Fermentation – Berliner Weiss – I was surprisingly delighted by this one. If the lines weren’t crazy in the Alley I would’ve gone back for more. Flat 12 Bierwerks – Brazilian Coffee/Chipotle/Vanilla Porter – This was on the top of my list to try. I think I’d like a little more vanilla than coffee, but everything blended together beautifully. So much so, that it was the only beer I took a picture of on Saturday. Broadripple Brewpub – Jalapeno Cream Ale – This beer was interesting. Not on the original line up, but you get the cream first and then the jalapeno heat to follow. I felt like I was drinking a jalapeno popper.. (maybe they should add some bacon into the brewing process) Hawcreek Brewing Co. – Wildberry Wheat – I really liked this one. I’ve had some fruit mixed wheats were the fruit kind of tastes heavy along with the beer, but this made it nice and light and not overpowering with the berry flavor. Against the Grain – Boom Gose the Dynamite – a Sour, of course I was destined to like this one. It was my first choice Black Swan – Sour Cherry – this is a cheat, I’ve had this a few times at Black Swan’s Brewpub. Still delicious and tart everytime. Brugge Brasserie – Harvey – I’m very happy that Brugge brought back Harvey. I still remember the first time I had it, back in 2011- First Annual Bloomington Craft Beer Festival. This beer is one of my loves. (which means I had multiple glasses of it) I hope everyone had a great time at the festival, that you were nice to the brewers and volunteer staff, that you found a new beer to love or a brewery to follow and that you come back next year! 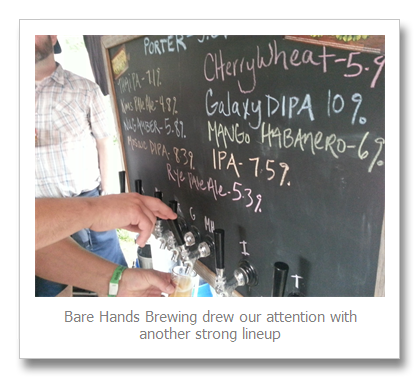 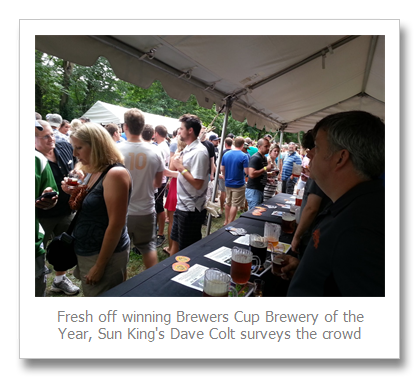 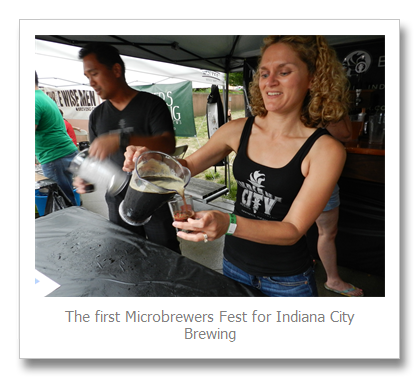 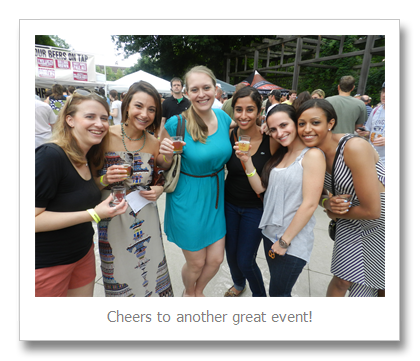 The 18th Annual Indiana Microbrewers Festival was a nearly flawless event from my viewpoint. I know that’s a pretty boring opinion and the good people working behind the scenes could probably tell you 30 things that went wrong off the top of their head. But here’s what matters for an attendee: we got in quick, all the breweries we saw were setup and ready to roll, and we had great beer. Congrats to the Brewers of Indiana Guild, Hoosier Beer Geek, World Class Beer, and all the breweries and volunteers on another great event! They’ve been around this block a time or two and know how to put on a good show. The Microbrewers Festival is a huge event, but with a completely different layout and feel than Winterfest. While things can get fairly crowded in “The Alley”, the massive outdoor layout never quite induces the same claustrophobic panic sensations as trying to walk down one of the main aisles of Winterfest at 4pm. The beer lines do get a little long, but I’ve seen worse at the Michigan Summer Festival and GABF. This year was also blessed with cooler weather that did not inflict the wrath of “swamp crotch” on attendees. However, as Poppi noted, this meant you weren’t sweating out all the liquid you consumed and lead to longer restroom lines. Some random observations:

On to the beer picks…….. Nathan’s Pick of the Day: Zwanzigz Barrel Aged Scotch Ale – Intensely malty with a nicely balanced bourbon character, ridiculously smooth for a beer weighing in at 13.4% ABV. Honorable Mention: