“We are pleased to announce that Barley Island Brewing Company has 4 brands now available in Chicago and the surrounding counties. Louis Glunz Beer, Inc has 121 years of experience as a family-owned and operated beer distributor in Chicagoland. Initial bottled brands for the Chicago market are Dirty Helen Brown, BarFly IPA, Sheet Metal Blonde and Beastie Barrel Porter.” – Jeff Eaton Kudos are extended to Tom Wallbank who took 1st place at the 2nd annual UpCup Competition in Bloomington. Tom’s Classic Rauchbier took top honors in a field of sixty beers. This is Tom’s first Best of Show. Tom’s entry was not entirely normal in that 95% of the grist was home-smoked with American Beech from southwest Indiana. Tom now has the pleasure of brewing his Rauchbier with Upland Brewing Company, and it will be entered in the Pro-Am GABF competition this fall. Shortly after recording his victory, Tom and Caleb Staton, Upland’s head brewer, were trying to figure out how to smoke 1000 pounds of grain.

Other FBI members also did well in the competition. Brian Steuerwald took 2nd place with his Russian Imperial Stout and Andrew Korty took 3rd place with his Belgian Blonde, making it an FBI sweep.

Roger Baylor didn’t like the Ohio River Valley Folk Festival – blog Watch the new New Albanian Bank Street Brewery be set up here, here, and here.In honor of the lifetime of support for Broad Ripple Village, the Mayor of Indianapolis proclaimed April 30th as John and Nancy Hill Day. – picture June 6th. Keg Liquor Fest of Ale has to move from the store parking lot for more space. It will be held at St. Anthony’s, 320 N Sherwood Ave, Clarksville. 20 breweries, 100 beers. 3-7pm. $25/$30 Turoni’s new restaurant in Newburgh is on Ind 66 just west of Ind 261. The building is up but has nothing inside yet. They hope for a July opening. 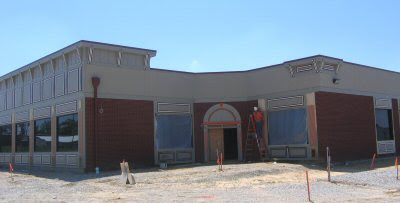