My wife likes to say I shouldn’t worry about things I can’t control. It’s a nice sentiment but never seemed very logical to me. I’ll just do something about the things I can control, so what else is there to worry about? Well….when you’re trapped firmly in the death grip of this motherf%@*er of a winter, one of the few things you can control is the seasonal beer you choose to consume. And that brings us to the next IndianaBeer group tasting. Hosting a tasting of “Winter Warmers” seemed like the perfect cure for my mid-January blues. Perfect until you get to the liquor store and face the question: “What exactly is a Winter Warmer anyway?” An Old Ale? An English Barleywine? A spiced holiday ale? To allow for some diversity (and avoid the dreaded style snob label), the rather loose definition of stronger winter seasonal, spiced or unspiced, will be applied here. The lineup ultimately selected featured beers from Dark Horse, Great Divide, Hinterland, Samuel Smith’s, and Southern Tier. Some were spiced and some lean toward English strong ale styles. A blind tasting was administered by our lovely hostess Poppi Rocketts (watch for the coveted Poppi’s pick in the results below) with an assist from Robin Walthery Allen. The beers were served in a random order to our tasting panel, and the identity of each was not revealed until after the panelists had finalized their individual rankings. Joining me on the panel were IndianaBeer reporter Dave Allen and guest panelists Bill Breuninger and Carl Nelson. Here is a summary of each beer sampled, with the brewery’s description followed by the panel’s tasting comments. 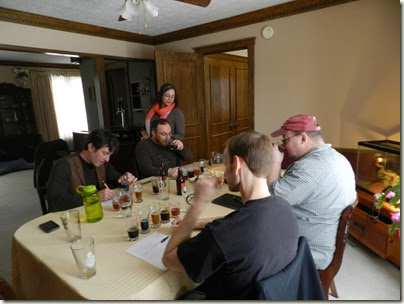 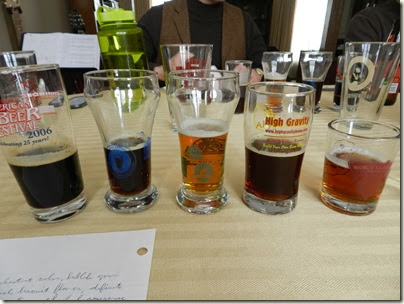 Beer #3: Samuel Smith’s Winter Welcome Ale – This seasonal beer is a limited edition brewed for the short days and long nights of winter. The full body resulting from fermentation in ‘stone Yorkshire squares’ and the luxurious malt character, which will appeal to a broad range of drinkers, is balanced against whole-dried Fuggle and Golding hops with nuances and complexities that should be contemplated before an open fire. 6% ABV

Beer #4: Great Divide Hibernation Ale – HIBERNATION ALE has been our celebrated winter tradition since 1995. This robust, dry-hopped ale has a malty richness balanced with a complex hop profile and hearty, warming character. 8.7% ABV

Beer #5: Southern Tier Old Man Winter – Our winter offering is here to quell your shivers and get you through the coldest of nights. A rich marriage of hops and barley to cast light upon the evening and melt your mind out of the snowdrifts. Old Man Winter’s earthy hue and thickness lace around the glass, inviting you to linger in its warmth and share the spirits of the season with your friends and family. 7% ABV

And while it doesn’t count in the official rankings, our hostess “reveals” her favorite…… Poppi’s Pick: Great Divide Hibernation Ale Here’s a short video of the panel breaking down our results: 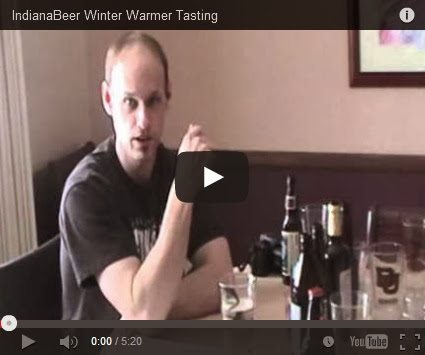 So it does appear the panel engaged in a bit of groupthink this episode, but the lineup largely dictated this as we had two excellent beers for the style, one that was clearly a notch below, one that just didn’t really fit with the others, and one that just wasn’t well executed. Winterland is the first beer I’ve tried from the Green Bay, WI Hinterland Brewery and it wasn’t a great start. We always consider price points when wrapping up these reviews, but the retail price of $3.99 for a 16 ounce bottle did not make Winterland a good value pick either. Old Man Winter was perhaps the most surprising underperformer in the lineup as Southern Tier makes some outstanding beers. But retailing for around $11-12 per six pack, Old Man was the cheapest beer in this lineup and warrants a “worth a try” recommendation based on the combination of price and flavor. And it does show some promise if you have the patience to let some mature in the cellar for a while. Samuel Smith’s Winter Welcome on the other hand, was a good beer, but not a great value pick based on the retail price of over $5 for an 18 ounce bottle, making it the most expensive beer per ounce in our lineup. The two clear standouts in our lineup were Dark Horse 4 Elf Winter Warmer and Great Divide Hibernation Ale. We found them retailed at $13.49/6 pack for the Hibernation and $8.99/4 pack for the 4 Elf, which makes them roughly equivalent in price per ounce. While this is a slight premium over what you might expect from a core lineup craft offering, our results suggest an extra buck or two is easily justified. One could argue the 4 Elf performance in our ranking was the most surprising given the admitted preferences of our panelists. Carl’s writeup noted “I have a fondness for roast. I do not have a fondness for spices.” Dave observes “I lean closer to the big-beer side of the equation and really don’t have much affinity for overly spiced beers.” You’ll generally find me conspicuously absent on this site from discussions of things like Pumpkin or Christmas beers, because I just don’t drink that many of them. So it’s a high compliment to Dark Horse that a spiced beer scored so well with this group. But throw in Poppi’s pick, and the big winner of the day is still Great Divide’s Hibernation Ale. This English Style Old Ale is only available during the winter season, so grab a six pack while you can. You’re going to need something to look forward to during your next 2-hour commute home from work. Cheers, Nathan 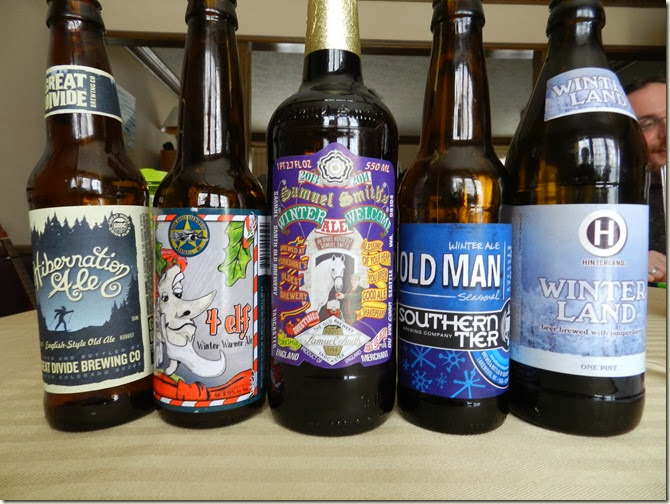