Brown ale is one of the oldest known English beer styles, with mentions in literature extending back to the 16th century. With the rise of porters and stouts in the early 1700s, the term “brown ale” became more of a generic description for the spectrum of darker beers than its own distinct style. Greater distinction among styles evolved in the early 1800s as porters and stouts adopted usage of the new black patent malt. The brown ale style was fairly obscure before a resurgence in the early 20th century behind brands like Mann’s Brown Ale, Whitbread Double Brown, and Newcastle Brown Ale. As American craft brewing grew in the 1980s, commercial examples of brown ales began to emerge as distinctly American versions. Pete’s Wicked Ale was created by Pete Slosberg to be darker and hoppier than British examples. Many American examples have followed this path with the use of American hop varieties, while some like Goose Island Hex Nut Brown attempted to maintain a close connection with contemporary English examples. 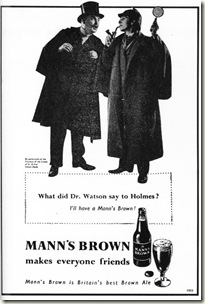 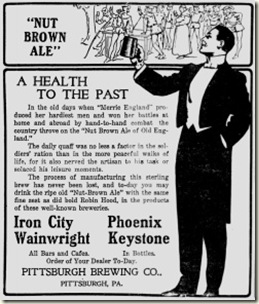 To compare some of the options in today’s market of brown ales, we conducted a blind tasting of offerings ranging from local to nationally distributed craft breweries. Beers were procured from Barley Island, Brooklyn, Dark Horse, Dogfish Head, and People’s and served in a random order to our tasting panel. The identity of each beer was not revealed until after the panelists had submitted their individual rankings. Joining me on the panel for this session were Jake Keefer, Ryan Mills, and Bob Pennington. Here is a summary of each beer sampled, with the brewery’s description followed by the panel’s tasting comments. Beer #1: Dark Horse Brewing Boffo Brown Ale – The Boffo Brown Ale is on the “full body” scale pushing the envelope of what an American Brown Ale is to most people. The beer has a very deep/dark color of brown with a nice creamy tan head. The mouthfeel of the beer is very soft and is very drinkable. Flavors of malt, caramel, toffee, and a mild earthy nutty finish allow this beer to be paired with hearty food and sips of bourbon. 6.5% ABV

Beer #2: Brooklyn Brown Ale – This is the award-winning original American brown ale, first brewed as a holiday specialty, and now one of our most popular beers year-round. A blend of six malts, some of them roasted, give this beer its deep russet-brown color and complex malt flavor, fruity, smooth and rich, with a caramel, chocolate and coffee background. Generous late hopping brings forward a nice hop aroma to complete the picture. Brooklyn Brown Ale is full-flavored but retains a smoothness and easy drinkability that has made it one of the most popular dark beers in the Northeast. 30 IBU 5.6% ABV 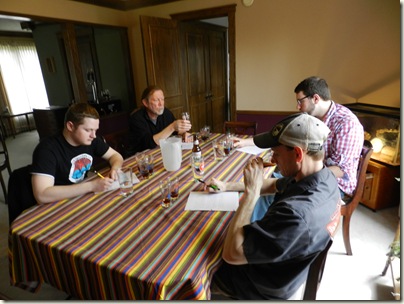 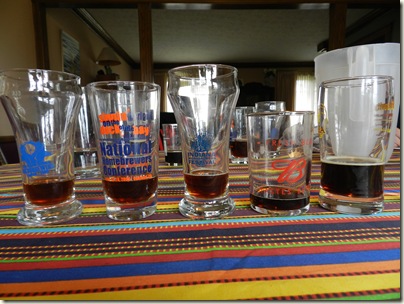 Beer #3: Barley Island Dirty Helen Brown Ale – A medium-bodied Brown ale with moderate hop bitterness that has a unique slightly nutty flavor in the finish. Dry-hopped to enhance the hop aroma. Dirty Helen was a famous tavern owner in Milwaukee. She was known for her dirty mouth, cussing out any customer that ordered a brand of scotch or whiskey that she did not carry. 25 IBU 5.2% ABV

Beer #4: People’s Brewing Mr. Brown – American Style Brown Ale… “That’s Mr. Brown to you!” We used a lot of base malt and four different dark malts in this beer resulting in a complex malt character and a warming alcohol flavor. This is a great cold weather beer, warming and smooth to take away the chill. We balanced it with Kent Goldings hops. 47 IBU 7% ABV

Beer #5: Dogfish Head Indian Brown Ale – A cross between a Scotch Ale, an India Pale Ale and an American Brown, Indian Brown Ale is well-hopped and malty at the same time. The beer has characteristics of each style that inspired it: the color of an American Brown, the caramel notes of a Scotch Ale, and the hopping regimen of an India Pale Ale. We dry-hop the Indian Brown Ale in a similar fashion to our 60 Minute IPA and 90 Minute IPA. This beer is brewed with Aromatic barley and organic brown sugar. 50 IBU 7.2% ABV

And the results are in……. As you can see in the individual ratings, it was a difficult decision among our top four beers. That may sound like lip service, but the total scores for each beer will illustrate just how close this one was. We used a model where the lowest number of points would win (a 1st place vote = 1 point, a 2nd place vote = 2 points, etc). After tallying up the scores, our collective ranking determined the final order (drum roll please): 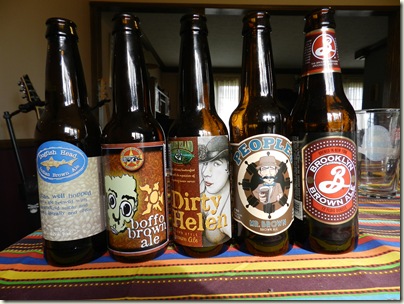 One interesting aspect of this tasting was the quality control issues of the national brands. We had two bottles of beer for each example, with the second available for reinforcements after our initial analysis. I’d like to try the Brooklyn Brown again, because both bottles of it had noticeable off-flavors that were probably an anomaly but knocked it out of contention in this tasting. The second bottle of Dogfish Head Indian Brown had a wild yeast contamination that turned it into a surprisingly good sour ale. Reactions to that were mixed as some members of the panel may have knocked it down a bit, while Jake and I gave the benefit of the doubt and scored it based on our notes from the first bottle. I sought out Dogfish Head Indian Brown as a member of our lineup because it’s the first beer that really hooked me on this style. But you may already be aware that obtaining it takes a little effort for Indiana residents these days (ie. driving across state lines). Barring that type of effort, you still have some great options. If you prefer your beers a bit on the maltier side, our panel would endorse picking up some Dark Horse Boffo Brown Ale. If you’d prefer a hoppier version, grab the Barley Island Dirty Helen. Of course, it’s also worth noting that People’s Mr. Brown earned the coveted top pick of our hostess Poppi Rocketts. It’s well worth a try if you’re looking for something with a little more complexity. Big thanks to Bob, Jake, and Ryan for serving on the panel and a bigger thanks to you for reading this far. These events are a lot of fun, and we just may offer up some additional guest spots to readers in the future. Be sure to follow us on Facebook to be informed when the next opportunity rolls around. Cheers, Nathan