From Conrad Stenftenagel and Jessica Condra:
How do you judge 23 hoppy beers in a
three hour period? I don’t know since I was pouring the Amber Ales,
however I must say that I am sympathetic to the two gents attacking
the deed.
Saturday, August 1st 2015
was the 8th Annual Homebrew contest at the Jasper
Strassenfest in Jasper, Indiana. With the chance to have your beer
featured at the local Basket Case Brewing, the competition was close.
In the end it came down to a classically clean and pleasantly sweet
light and a dark roasted hazelnut vanilla brown ale, and isn’t that
how it should be? Clean and classic vs dark and new, the battle of
the ages. 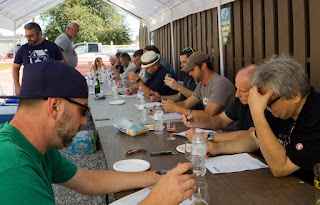 The Dubois County Suds Club was set up
by 10am for registration at Snaps located just off the square in
Jasper, a great place for food and an array of Indiana beers (I
enjoyed a few of the Bloomington Brewing Company’s Ruby Bloom and a
lovely pulled pork wrap while pouring for the judges). As the coolers
filled with bottles it became apparent that “Hoppy” was the brew
of choice for many brewers. Registration ended at 10:45am with totals
of 6 light, 12 wheat, 14 amber, 23 hoppy, 13 dark, 6 imperial and 16
specialty. 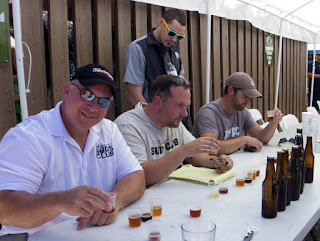 Judging was based on BJCP guidelines
and there were two judges per category. Each category awarded a 1st,
2nd and 3rd place with all seven 1st
place winners moving to the best of show round. The best of show
consisted of three judges who battled it down to a top two, light vs
dark. In the end the Best of Show was t

he Hazelnut Vanilla Brown Ale
brewed by Bobby Edge. Edge had a great day earning six awards
including the coveted Best In Show. This delicious, and yes I did get
my sample, will be featured at Basketcase Brewing at the Millhouse
restaurant in Jasper, Indiana…once it is brewed for the masses I
would expect sometime this fall. 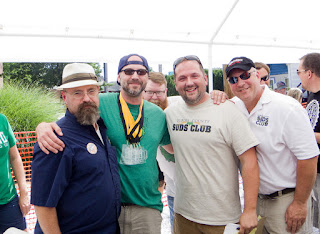