It was a hot, humid day, but that did not stop me or the sizeable crowd which was larger than last year’s event from attending this year’s Mad Anthony Brewing Company’s OktoBEERfest that was held in downtown Fort Wayne at Headwaters Park Pavilion West.

The beer tables were located in the covered pavilion shaded from the sun and heat where the thirsty attendees had access to unlimited samples of 100+ beers, ciders and meads.  There was a very wide variety of beer styles available to appeal to the newcomer to craft beer to those that are no strangers to the world of craft beer.  There was beer swag available at most of the brewery’s tables ranging from cardboard coasters to beads, to key chains, to stickers and more.  Since I collect the cardboard coasters, I was able to add to my collection which made me a happy camper!

Again this year there was a drawing for two tickets to this year’s GABF being held next month in Denver, CO.  Unfortunately, like last year, I did not win; however, congratulations to the winner and I hope they have a very beery time at the event!

The M.A.S.H. (Mad Anthony Serious Homebrewers) brought Meads and Ciders for the attendees to sample and as always they were very tasty!  If you are at a beer event and see their sign, by all means sample what they have available.

I sampled ten (10) rateable beers and two ciders (I am a beer rater at www.ratebeer.com) throughout the event.  I am not a “hophead” per se so I tend to drink beers that are more smoother, maltier tasting than those that are hoppy and bitter tasting.  I sampled/rated beers/ciders from the following breweries:

My photographer, aka my husband, took approximately 40 pictures throughout the event and here are some chosen at random: 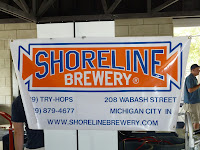 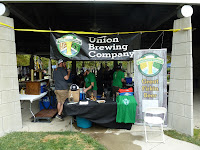 As a final note, Mad Anthony Brewing Company President, Blaine Stuckey, thanks all the breweries for their attendance at this year’s event and for all the beers they brought.  Blaine also thanks all the attendees for coming out to this year’s event and sampling some very good Indiana brewed beers, meads and ciders.
See you next year and keep supporting Indiana breweries!!