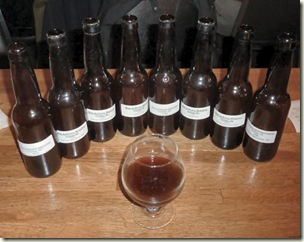 Mad Anthony’s brought out 8 of Todd’s vintage ales in 12oz bottles. The festivities started at 5pm last Wednesday and only 3 offerings were still around by 9pm – the 2006, 7, and 8 Barley Wines. In IndianaBeer style (see Upland Lambics) we formed a roundtable so we could best describe (not rate or rank) these fine beers. Tried around the table by Dan Goble, Bob O, Mark Snow, Eric Basset, theDM, and Grant Curlow.