Fiddler’s Hearth, South Bend’s premier beer pub, will hold the Indiana tapping of Founders Nemesis 2010 – a 12% Barleywine. Nemesis won’t hit the stores until September but you’ll be able to get it on tap on August 31st starting at 8pm. Pelican, evidently a big-time trance-metal band (hear them here), are having a show in Chicago on October 23rd. Three Floyds will unleash a Doppelbock dedicated to them. article

Bell’s fourth beer in mini-kegs will be out late this fall – Winter White will join Oberon, Two Hearted and Best Brown. Bell’s 25th Anniversary party will be held mainly on Friday, Sept 10th and Sat, Sept 11th at the Eccentric Cafe. Schedule: 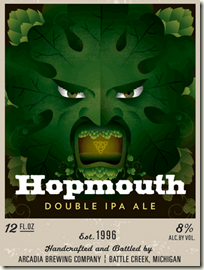 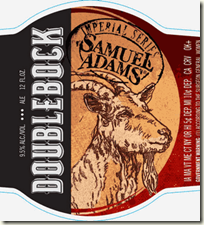 <=== Arcadia Hopmouth label. Sam Adams Doublebock label. They also plan an Imperial White and Imperial Stout ===> In a previous post we mentioned the Brits who have crawled to 14,000 pubs. The CAMRA paper, What’s Brewing, has an article about Stuart Ashby who has visited 17,015 pubs since 1984. "Not bad for someone who doesn’t drive and has to rely on public transport". "Burger King is opening a restaurant in Miami Beach that will serve beer along with burgers and fries, the chain’s first U.S. location with alcohol." article Happy meal? Whopper, fries, and a Bud. $7.99. One coming in NYC also. And maybe Orlando.