Add to your calendar: KokoFest Micro Brew Festival in conjunction with AllKokomo.com. October 9th. Behind the Half Moon. Local beer freak Blake Montgomery is setting this up to benefit the Carver Community Center. The CCC provides youth activities, lunches, mentoring, day care, and generally makes life better for kids in Kokomo. Two CCC fundraisers earlier this year were strongly impacted by bad weather and this Festival hopes to make up some of their shortfall.

Breweries, etc.: Blake’s one of the good guys and he has just over a month to pull this together. He’s recruited the local VFW post to provide workers. When he calls you, give him the nod – or call him at 765-438-9591 (blake@profitws.com) right now. It’s a good chance to make inroads into the Kokomo market and help a worthwhile cause. 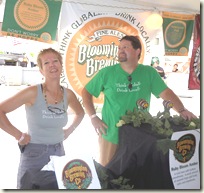 Bloomington Brewing‘s equipment for the new production brewery is in and pretty muchly installed. They have a new Premiere system with 20 bbl capacity on the hot side and 40 bbl fermenters and bright tanks. Eileen Martin will brew the first batch in September.

Aleen tells us Bloomington beers can now be found at the three Indy-area Scotty’s Brewhouse locations. (Wilbur Brewing’s Country Mellow Amber is on tap in Scotty’s in Bloomington).

Bee Creek Brewery has grown a bunch. No longer just brewing on Saturdays, they have 2 full-time and 1 part-time person. Huzzah. 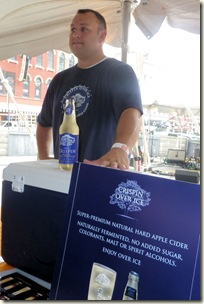 Crispin Ciders is making inroads here. Distributed by World Class Beverages, they have a variety of natural no-sugar-ciders and a perry (pear cider for you heathens) made in California and supported by Chad Lushin here in Indiana. Bottles and kegs are available and Chad is getting more and more taps replacing Woodchuck and that ilk of fuzzy flavored water. They do want their cider to be served over ice, "European style" but won’t monitor it in your own home. They also make the cider for Original Sin’s line (distributed by Cavalier). Crispin’s lineup:

It’s now official and we have permission to tell you Omar Castrellón will be leaving Alcatraz in 2 weeks to be the head brewer at the Thr3e Wise Men brewery in Broad Ripple. Skip Duvall will move back across the street from the Ram to Alcatraz at that time. TWM has a new system very similar to Bloomington’s (see above). 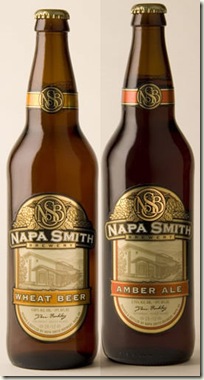 New to Indiana next month – We’ll be seeing Napa Smith beers via Pelican Brands and WCB. Made in Napa, CA, by Don Barkley. He’s been in craft beer since it started in 1978 at the New Albion Brewery who started it all – article. Oh, and Mendocino Brewing of course. NS is only two years old but it has chops. The first offerings are a Wheat Beer (4.6%), an Organic IPA (7.1%, 70 IBU), and Lost Dog Red Ale (7.2%) which has a boldness befitting its strength. If the statistics Mark Kleiman quoted in the The Atlantic  are even close to accurate, his point also leads to the obvious conclusion that good craft beer can never be more than 20% of the market:

"Divide the population into deciles by annual drinking volume. The top decile starts at four drinks a day, averaged year-round. That group consumes half of all the alcohol sold. The next decile does from two to four drinks a day. Those folks sop up the next thirty percent. Casual drinkers – people who have two drinks a day or less – take up only 20% of the total volume. The booze companies cannot afford to have their customers ‘drink in moderation’."