The latest collaboration of Three Floyds and Mikkeller is Ruggoop, a 9.5% Rye Wine. It was bottled on Tuesday and will be tapped on Thursday and each Thursday until it’s gone. On Fridays they will tap a keg of Owd Engwish Bawley Whine each week also. The Ram is experiencing Gencom once again. As 25,000 gamers descend on downtown Indianapolis the Ram is ready with a back room set up for game playing, TroolBlood Alt and Primal Porter are pouring from the taps. Trollblood Alt is has the proper red notes and is much to style with stringent bitter that overcomes the hefty malt. The boys’ new batch of Big Horn Hefeweizen went on tap Tuesday evening and is a perfect example of a German Hefe rivaling Oaken Barrel’s Uberweizen – miraculous since it was brewed last Friday, boiled CO2 on Saturday through Monday and was ready in just 4 days. 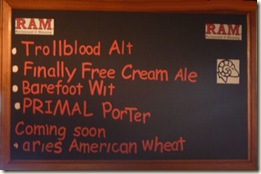 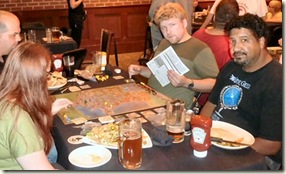 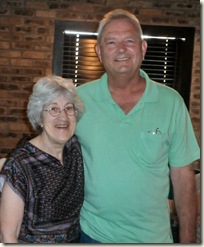 ==>> Here’s Rita with Jim Dunbar who bought the first mug of Oaken Barrel beer back in 1996 – A blonde named Irish Gold if you don’t remember. Jim was with the USAF Reserve at the time and now flies Lifeline helicopters. The Apple Buzz has held up nicely and should yield 4 batches this autumn instead of 2. The Brewberry Stout is better than ever. The Barley Wine now has leather notes. The Port Barrel Barley Wine has aged very well, giving a bunch of oaky vanilla that lingers on and on. The Schwartz has dried, which is not a bad thing. The Java Porter has acquired some sweet vanilla also. Oh, and they are going to make another batch of Uberweizen while the summer heat is still on. Rita’s review of Liz Laughlin’s BOS Simcoe IPA is worth a read. Congratulations to Sun King for being voted the Best Brew Pub / Tasting Room in Nuvo’s Best of Indy 2010. They also got the cover and 3 page article. The Brewers Association says there are 1625 breweries in the United States. That’s 100 more than last year at this time.