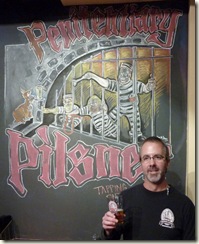 Skip Duval made his Alcatraz public debut with a tapping party for Penitentiary Pilsner. Oh, and he has an assistant now – Dan Krzywicki of Great Fermentations comes in once a week to help out.

Upland has a “Local’s Twelver” variety pack on the shelves with the slogan “Nature’s idea of beer”. 2-each of Wheat, Dragonfly, Bad Elmer’s Porter, Pale, Am Brown, and a Seasonal. A peek inside turned up Oktoberfest at my local Krogers. $15. Good price. Keeping up with Girls Pint Out, The Mans Town is starting a sorta-similar social organization in Indy. First meeting in mid January. Two words: Brandy Barrel-aged Poppa Skull. and a new tank at FFF. Headlines: Is change in alcohol I.D. law in the cards? and Change needed in alcohol laws The Muncie Star-Press editorializes for Sunday Sales. The Hoosier Beer Geeks and Goose the Market in Indy are proud to announce a new club to feed your curds-and-whey craving and appetite for artisanal ales. Register in the Beer and Cheese Club before Dec. 31st and get a 1 year subscription to Beer Advocate Magazine! $99 per 4 monthly allotments of farmstead cheese paired with craft beer plus tasting notes and HBG reviews. Call the Goose to register: 317.924.4944 The HBG seems to be done posting their Metromix collaboration detailing the breweries of Central Indiana – augmenting their Where To Drink in Indianapolis from a year ago.

Sun King. Coconut Wee Mac. Just sayin. Brewpublic sorts out the Rock Bottom/Gordon Biersch merger. “A source associated with Rock Bottom’s brewing department, who asked to remain confidential, tells us that it now looks like things with the RB-GB merger “aren’t going the way (the most of brewers) had hoped” telling Brewpublic ‘We’re less than a month into this thing and the new CEO has decided to start making changes to our beer program. He wants us to standardize at least four, and possibly up to six of our beers across the entire company.’ ” article Martyn Cornell has sorted out what ales really were called back in the Victorian era. article It’s always winter in your refrigerator.